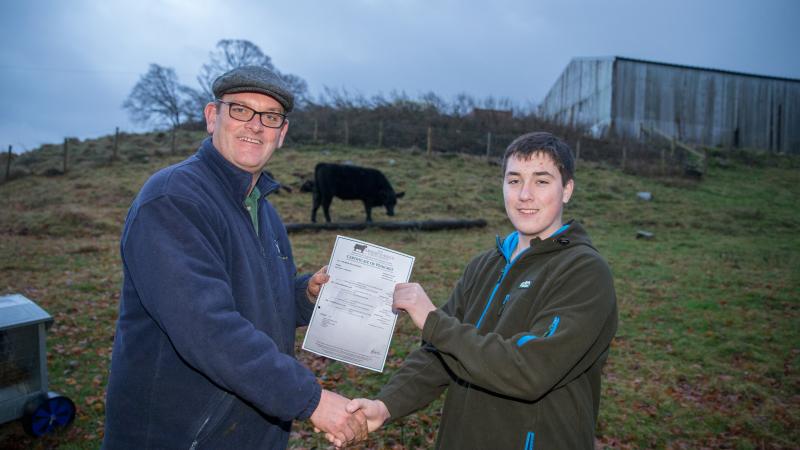 Young beef cattle enthusiast, Craig Johnstone, from Pitlochry was the lucky recipient of a pedigree Aberdeen-Angus heifer kindly donated by Kevin Moores of the Formby, Liverpool-based The Moss herd, as a result of taking part in the Society’s industry leading Youth Development Programme (YDP).

YDP workshop participants aged between eight and 24 years old who attended a workshop last summer across the UK and Ireland were entered in to the competition with a chance to win the heifer. The workshops covered beef cattle handling, preparation skills for shows and sales, stockjudging and public speaking with training offered from some of the industry’s leading stock men, women and experts.

Fifteen-year old Craig has recently taken ownership of the heifer when Kevin delivered her personally to Craig’s uncle’s farm where she will remain. “I attended my first YDP workshop at Kincardine Castle in Scotland last year with an interest in learning more about working with cattle. I don’t live on a farm, but enjoy helping out with my uncle. I never dreamt attending the workshop would see me winning a pedigree heifer.”

The heifer, The Moss Felucca R323 was born in April 2015 and is by The Moss herd’ stock bull Scholland Wizzard K459 and is out of The Moss Felicia G739, a female sold to the Rawburn herd of Messrs John Elliot, for 7500gns.

Breeder Kevin Moores said: “I’m delighted to be able to offer this exciting prospect to the YDP. The programme is fantastic at both supporting and promoting the next generation of Aberdeen-Angus enthusiasts. Felucca has been bred from one of the herd’s most exciting and highly sought after dam lines and has been AI’d to Raff Hercules, offering a strong pedigree line for Craig. I wish him and his family all the very best and look forward to hearing how she breeds for him.”

Commenting on this opportunity, YDP co-ordinator Gayle Bersey said: “The offer from Kevin to donate a heifer for the programme was an incredibly kind gesture and it’s proved to be a fantastic opportunity to kick start a new herd for Craig. The workshops are proving more popular year on year, but the draw of winning a pedigree heifer has proved a great attraction for members.”

For the 2017 programme Society junior vice president Angela McGregor has very kindly offered to donate a heifer from her Aberdeenshire-based Newcairnie herd. However, this year the Society is opening this up to all keen Aberdeen-Angus enthusiasts via a raffle with proceeds going to the YDP. Tickets will start being sold at the forthcoming Stirling Bull Sales in February. More information as to the breeding of this heifer will be made available on the Society’s website in due course.