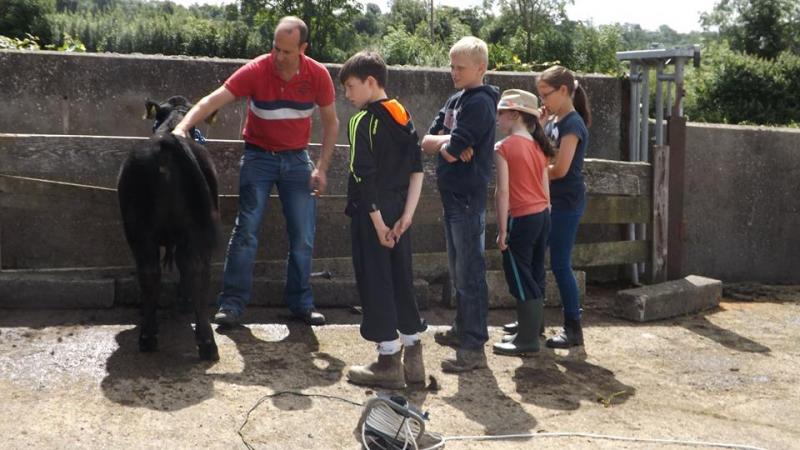 The sun always shines when the YDP hits Mohill – we always seem to be lucky and bask in the glorious weather and the host for the day Mac Crowe said that he always cut hay when the YDP was in town. Last year’s workshop didn’t quite go to plan with flight delays but the YDP team made sure we landed the night before to avoid the same thing happening again.

Irish Aberdeen Angus Association Secretary, Kathryn Bradshaw and Mac Crowe were kind enough to invite us back for another workshop and Kathryn is great at getting youngsters to come along as well and there is always a warm welcome at Broomstreet. Trainers for the day were Ireland’s own Eustace Burke from Co Cork. Eustace is the owner of the Clontead herd of Angus and trained with YDP many years ago but I had quite forgotten how good he was! Still keeping with moving trainers around, Michael Kirby from Devon joined the training team, 2014 dressing judge – Mike loves showing and always has an Angus for the prime stock shows. YDP resident stock judge Clive Davies came over to do the stock judge training and it’s nice to be able to give the Republic of Ireland youngsters the same training as we do in the rest UK as they don’t have YFC like we do and it’s something that they will be judged on if they get through to the final.

14 youngsters joined us for the workshop and were treated to lots of great tips. Splitting into smaller groups gives everyone more chance for hands on experience. Eustace took the clipping – explaining all the tricks for successfully clipping an animal, giving the kids the help they needed yet also lots of freedom to have a go. Mike took the washing, blowing, halter changing and knot tying seminars and Clive took the stock judging. The groups swapped round and everyone got to have a go at everything.

Having two assessors present, Andrew Hughes & Marie Louise Ryan, meant that we could split into smaller groups for the dressing and ring craft activities.

Eustace took the ring craft seminar and this was one of the best ones I’ve heard, it was all the things that you need to be told but most trainers are too afraid to say these things! Mike took the dressing and this was where he came into his own – when the kids had finished the cattle looked phenomenal.