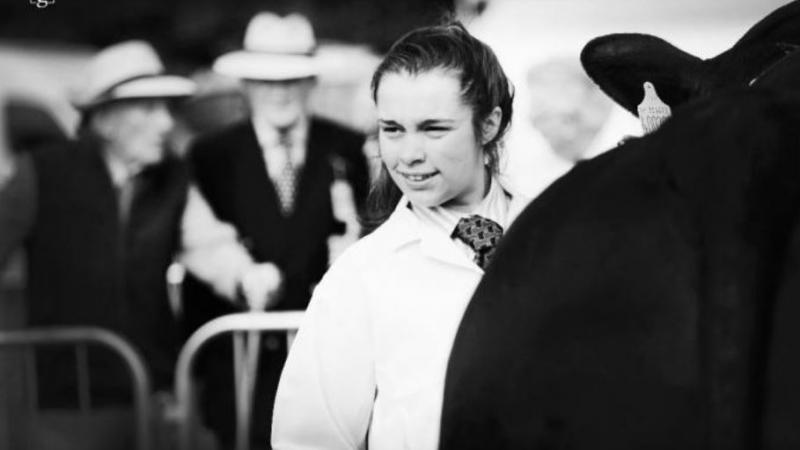 A couple of weeks ago, our 2018 Youth Development Programme culminated with the grand finale taking place in Shrewsbury where our youngsters put to practice all the things they’d learned at the workshops throughout the year. We will be speaking to all of the winners to hear their reaction and learn a bit more about them, the first of which is Ellie Westaway. Ellie is 18 years old and is a first year Agriculture student at the University of Reading. When she’s not taking part in her local tug of war team (or even captaining the England team – which Ellie had the honour of doing at under 18 level last year!), she is involved in both the Melview and Nightsky herds of Aberdeen-Angus.

Ellie’s parents run a county council farm on the Goucestershire/Herefordshire border where they run the Melview Herd of Aberdeen-Angus. In addition to lending a helping hand at Melview, Ellie also has a few animals of her own under the Nightsky prefix. The Westaways have had the farm since 2006 and in that time have seen some great successes, winning numerous breed championships. A particular highlight in Ellie’s opinion was as recent as 2017, where they managed to come out on top in five classes at the Summer National Show and took second place in a further five – a wonderful achievement for all involved.

Speaking to Ellie about her take on the renowned Aberdeen-Angus Youth Development programme, reaction to winning and future plans, she told us the following:

For how long have you been involved with the YDP?

”I’ve been going to Youth Development Programme workshops since about 2008. I started going to workshops to learn how to prepare our own cattle for the show ring. I still remember to this day my first workshop where Willie Robertson taught us how to make halters!”

What are your thoughts on the programme and what it involves?

”I’ve really enjoyed my time at YDP workshops across the years! I really like the fact that the workshops are so hands-on, meaning rather than just watching the instructor do something you get to have a go and do it yourself. I think what makes it a great programme is the sheer calibre of people that give up their time to be instructors at the workshops. I learn something new at every workshop I go to despite having been to so many over the years.’’

What was your immediate reaction when you found out you’d came out on top in your section?

”Going into the final I had no expectations to win the competition at all. It was my first time competing at the final, having qualified before but being unable to attend, and I was also unknowingly at the time struggling with glandular fever so was feeling unwell! Therefore, when they announced my name as the winner, it was a complete surprise. I couldn’t believe that I’d won against people that in the past I’d looked up to in the show ring when competing against them.’’

What are your career plans and ambitions for the future?

”Following the completion of my degree, in the future I’d like to work in either the cattle nutrition or genetics sectors, whilst having my own small herd of Aberdeen-Angus on the side.’’

Do you have any words of advice for any other young enthusiasts?

”My words of advice for people wanting to get involved are to jump at every opportunity given to you and ask all the questions you have, as this is the best way to get experience and to learn.’’

We extend a huge congratulations to Ellie on her brilliant achievement! As a first-time competitor in the Youth Development Programme finale, Ellie’s skills and potential shone through brilliantly, and we look forward to keeping track of her future and budding career in the world of agriculture.