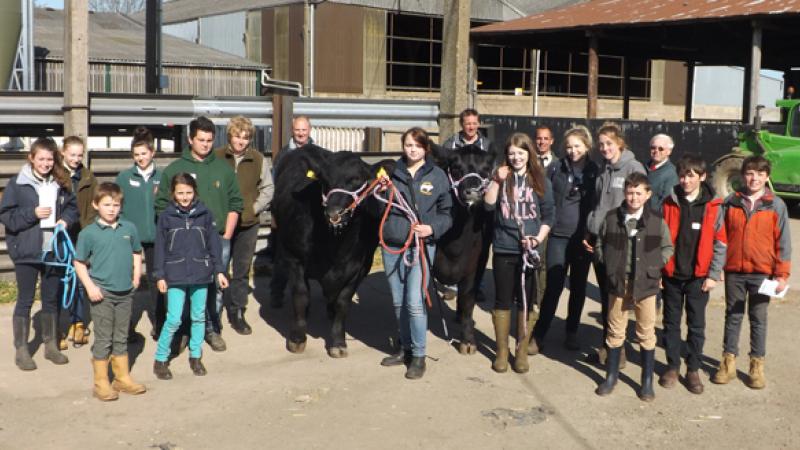 The 2015 workshops have got off to a flying start with the first one taking place in East Anglia by kind permission of Shadwell Estates.

I don’t think we’ve ever had bad weather in East Anglia and it was glorious sunshine yet again this time although the breeze certainly made it feel like spring not summer. All those involved at Shadwell are great supporters of the YDP and head stockman Robert Clarke had worked really hard to get so many haltered cattle ready for us and they were a real credit to him. For Angus followers, Robert needs no introduction really as he’s certainly been in the headlines over the last year or so with various wins at both regional and national level for the herd.

Robert was joined on the day by Clive Davis, master at stockjudging and public speaking, Clive commentates at several of the major livestock events and also breeds Hereford cattle and Shropshire sheep.

Then completing the team was Kevin Byford, hhowman for Andrew Brown’s Hawstead Lodge Aberdeen-Angus herd, which like Shadwell, has celebrated great success over the years.

Some 14 participants joined us for the day and I’m sure they will have learned a lot from our team of trainers. With quite a few younger attendees we started the day washing stock, by pairing the more experienced with the not quite so experienced and it was great to see everyone working well together. Kevin gave an example of using the blower and everyone took it in turns to dry their animal.

The participants were spilt into groups and Kevin took the clipping seminar – showing everyone where and when to clip and how to handle clipping cattle that haven’t been clipped before. Robert did the halter changing and quick release knot tying and he’d also managed to find a lady who makes halters, which tied in with his seminar. Louise Wakenshaw works in the store at Shadwell and halter making happened to come up in conversation. It was great that everyone no matter what age had something to take home.

Clive took the stock judging and he’s adding in a few different ideas and my mission for the next workshop is to find a measuring stick, which funnily enough, proved easy at Shadwell. You’ll have to come along to a workshop to know what the stick is for.

The seniors in attendance was given the chance to clip and prepare an animal from scratch to see if they can qualify for the final and assessor Andrew Hughes was on hand to give some tips and advice as even the most experienced seniors can always learn something.

Dressing cattle was the name of the game after lunch and Kevin and Robert gave a run down of the various products available to use and what could be used on different coats. Then all the products were put into action and we finished the day with the ring craft. Even the smallest participant had a go, as the cattle were perfect for them. They usually start off a little nervous due to the size ratio, but once they get going there’s no stopping them

A great start to the 2015 workshops with many thanks to Shadwell Estates, Robert Clarke, Clive Davis, Kevin Byford, Louise Wakenshaw and Elton (I don’t think he has a surname!)

Yet another weekend and another workshop so off to Glympton next – a new location and some new training faces and let’s hope for more of the same sunshine.