Quality over quantity at the Central England workshop 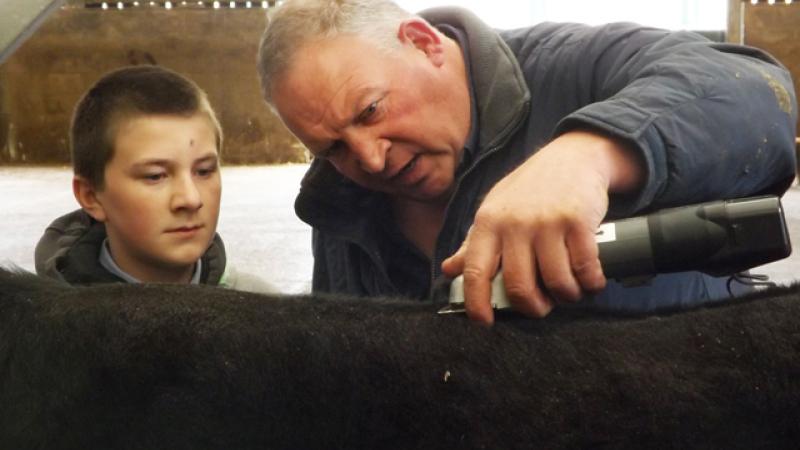 Sometimes the bigger the workshop the more atmosphere there is, but I’m never worried too much about a smaller number of participants, as they get so much more time and space to learn. So, what the Central England workshop lacked in quantity it certainly made up for in quality with some very enthusiastic people attending.

The location for the workshop was the home of the Glympton herd of Aberdeen-Angus at Woodstock, Oxfordshire. Glympton has had much success in the show ring over the last few years winning the National Angus Summer Show and also the coveted Burke Trophy under stockman Niall Dallas.

Trainers for the day were Paul Walker – a freelance stockman and owner of the Crackleybank British Blue herd. Paul judged the ring craft section of our 2014 final and was back to try his hand at some training, for which he was a natural. Joining Paul was Keith Jempson, another freelance stockman, who works with the show team at Glympton and had haltered all the cattle for the event. And of course we can’t have a workshop without our stock judge extraordinaire Clive Davis – I never tire of listening to Clive’s training sessions and his explanations hopefully start everyone forming their opinions at what they want from an animal.

Seven participants joined us on the chilly spring day. Keith took a group of them to wash and blow the cattle, while assessor Andrew Hughes watched them change halters and tie knots giving a few handy hints to use for the future. Paul took the first group for clipping and with ample time to cover lots of aspects of clipping, they will have really learned a lot. Everyone completed the stock judging together and as always the ring of bulls threw up some varying line ups and all did well at their reason giving.

Everyone was spoilt with lots of time to complete all the tasks and I didn’t have to hurry anyone on…..well not too much! When everyone had washed, clipped and done the halter work we moved onto the dressing. Paul explained the different products and how they could be used on different coats and then everyone had the chance to dress an animal whilst the trainers gave some advice and tips. The day ended with the ring craft, where Keith gave an overview of how you should conduct yourself in the ring, as well as making the most of your animal while Paul gave a demonstration. It always amazes me how much we rely on sticks yet there are several ways to stand an animal up without one – but you’ll have to come on a YDP workshop to learn those.

Another great workshop with thanks to Ben Wilson and Niall Dallas at Glympton Farms Ltd, Paul Walker, Keith Jempson and Clive Davies.