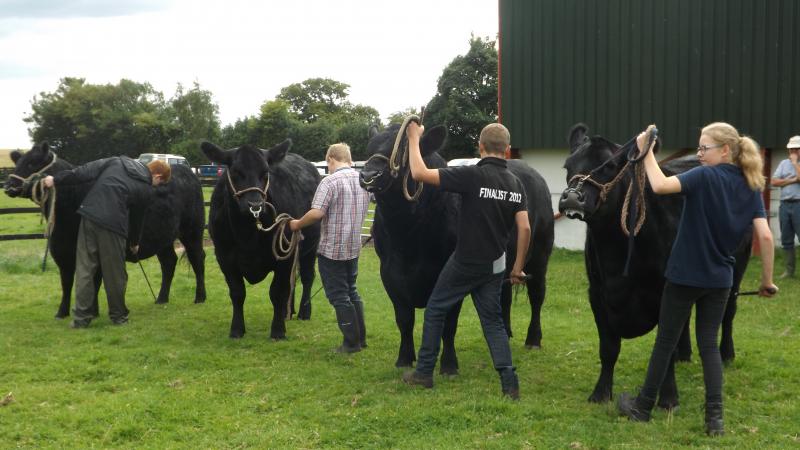 So here it was the last workshop of the year and the workshops are still filled with the same youthful enthusiasm as when we started the tour back in April. We have travelled the length and breadth of England, Ireland & Scotland and sometimes all those countries in one weekend!

We’d made the long journey from the Central Scotland workshop the day before down to the pretty countryside of Brandsby near York. Adrian and Penny Johnson from the Yearsley herd of Angus had kindly agreed to host the workshop or rather they were cajoled by me to do it! Adrian has been a YDP trainer for many years and is great at encouraging kids to get involved and being so laid back my bossy outbursts never seem to faze him.

Adrian remained a key part of the training team and he was joined by Ashley McInnes, a freelance stockman from Goole. Ashley has a great pedigree in showing cattle and with his wife Emma also run a farm as well as a successful show products business and are great supporters of the YDP. Clive Davies our resident stock judge trainer also joined us for the last one of the season to give some words of wisdom on judging cattle.

14 participants joined us for the day and some from as far away as Norfolk! We started the day splitting into 2 groups – one group went with Adrian and his workman Richard Graton, to do the washing and blowing and Ashley took the clipping demo. The 2 seniors in attendance got to clip and dress an animal from scratch under the watchful eye of the Independent Assessor Andrew Hughes. Andrew and Adrian helped everyone with the halter changing and knot tying and then everyone swapped around so they all had a go at everything. It was then Clive’s turn to take centre stage and do the stock judging. Clive took everyone through what they should be looking for in a beef animal and also how to put reasons together and everyone had a go at judging and reason giving no matter what the age or experience.

Dressing cattle was next on the agenda and Ashley had a multitude of McInnes Show products to show everyone what is available, when you should use it and how to use it. This always keeps everyone entertained getting covered in black soap! We finished the day with the ring craft and for the first time we actually took the cattle out on grass! Adrian took everyone through what is expected in the show ring and some tips to get to the top of the show ring. Everyone had a go and it was great to see the participants help each other out. The scoring system for our finalists is obviously based on capability but there is also marks to be gained for attitude and helping others as we like to make sure our YDP winners are well rounded people not just good in the show ring!

A great workshop to end the year on with many thanks to Adrian & Penny Johnson, Ashley McInnes, Clive Davies and Andrew Hughes.

So that’s it all the workshops have been completed and the finalists have been sorted out and just the weekend event to look forward to now . . . . .