New trainers on board for South East England Workshop 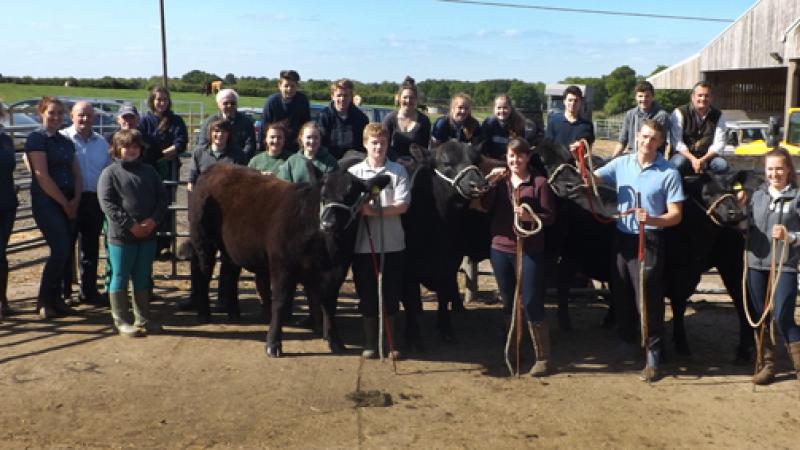 It was nearly a whole new line up for the south east workshop this year and not only was it the first time at a new venue but three of the four trainers on the day had no experience of the YDP at all. However, they all had plenty of experience with stock and I soon drilled into them what the YDP is all about.

Hosting the event this year was father and son team Alan and Rob Bishop. Rob has helped us train on numerous occasions, but it was the first time the family had hosted the workshop at Warrenho. The Bishops are no strangers to success with the Warrenho herd, having numerous championships to their name at local and national level and Rob is also now a Society council member and chairman of finance, so I need to say nice things about him! Rob took a back seat on training this year, but had worked really hard to get plenty of cattle haltered and quiet for the day – although we still used his advice during the day.

The only trainer with previous YDP experience was Clive Davies – Clive undertakes most of our stock judging training as he’s perfect at telling everyone what they should look for and putting reasons together.

First new addition to the team was another Hereford stockman in the form of Steve Edwards. Steve has a wealth of experience in turning out show and sale winners and has 10 Royal Show Hereford championships to his name.

Next member of the new team was Jimmy McMillan – more synonymous with the Simmental breed bringing out numerous show Champions most recently with Sterling Simmentals, Jimmy is well known across the industry as a leading light in the pedigree world.

The last new face to join the team was Nichola Osgood – this young lady might not have the years of experience of the rest of the team, but she knew her stuff and was fabulous with the youngsters.

We had 16 very enthusiastic participants attend the day in glorious sunshine. Marie Louise Ryan was the lady to impress on the day as she was doing what she did so well last year – assessing the participants. We do this for two reasons, firstly to give valuable feedback to those who attend the workshops telling them how they might improve in the future and also to pick the finalists for the grand final at the end of the year.

We followed the usual plan of working in groups – Jimmy and Steve undertook different parts of the clipping and it was good to have two groups to do this as hopefully everyone had more time to ask questions and gain more knowledge. Clive did the stock judging and as always got the best out of everyone and Nichola did the washing and halter content.

One young lady started the day nervous to even touch and animal and finished up by washing everything when we had finished which just proves how important this work station is and how much the youngsters gain from it when it’s done properly. The seniors had their own animal to clip and dress themselves with plenty of help from the trainers and assessor.

The afternoon consisted of dressing and ringcraft. Jimmy took on the dressing seminar giving an outline of what products are available and how they should be used. Everyone worked in pairs to dress an animal and the trainers mingled to give advice where needed. Steve took on the ringcraft activities ably assisted by Nichola giving lots of tips to get noticed and also some ring etiquette observations. It’s always great to see everyone having a go at this and it’s usually the bit everyone looks forward too.

Another glorious workshop this time in the sunshine with huge thanks to Alan and Christine Bishop, Rob and Rachel Bishop, Clive Davies, Steve Edwards, Jimmy McMillan and Nichola Osgood.\

Next stop on the tour will be a trip to Aberdeen. This will be the first Scottish workshop of 2015 and look like it will be a big one – here’s hoping the sun will be shining.