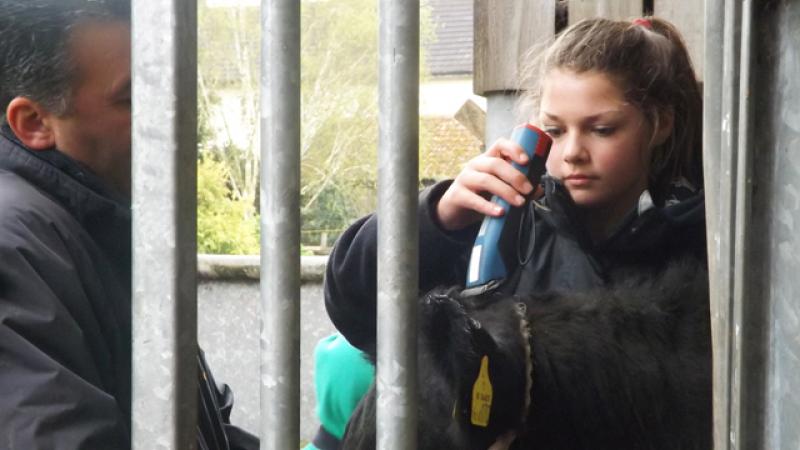 Not too many miles on the clock for the last workshop with Devon being close to home territory for me. Inevitably, once someone volunteers for something they end up being called upon for many things and this is certainly the case for Ed and Claire Jones of the Rull herd at Cullompton.

Not only have they hosted the workshop for the last four years, but they were also hosts for some of the activities on the inaugural senior conference held earlier in the year. Ed has also been chairman of the YDP committee so is more than aware of what’s involved.

Trainers for the day came in the form of Clive Davies our resident stock judge trainer. As always he has such an encouraging way about him and is a fabulous speaker, no matter the subject.

In a bid to get some new ideas for this year, we had yet another new addition to the team in the form of Nick Hill. Nick owns the very successful Quaish herd of Limousins and a few British Blues and commercials too.

The third part of the training teams was Richard Ashenden, more commonly known as Colin Hutchings right hand man and ‘Big Rich!’ It was great to have him along for the day, as he has been showing cattle for many years and used to show his own Angus too.

Some 10 keen participants joined us on what should have been a summers day, but was definitely more like spring!

As with all the workshops splitting into smaller groups means that everyone gets more hands on experience. Rich took on the washing and blowing. Now some people might see this workstation as a waste of time or are a bit offended when asked to take it, but to me this is the most important part of the workshop. When the youngsters aren’t very experienced it’s a great way to build their confidence with cattle, relax and make friends. It’s also a great way for the assessors to see how good participants are at understanding cattle, how they deal with them if they are fidgety and also how they work with other people.

Rich completely made this workstation his own, explaining to the younger ones how to approach an animal and giving everyone an understanding of animal psychology.

Both Rich and independent assessor Andrew Hughes put the participants through their paces changing halters and tying the quick release knots – another thing that is very important.

Meanwhile, Nick took the clipping workshop. Nick was great at explaining what needed to be clipped and what didn’t and was rather tactful in the presence of the cattle owners. He was also good at getting the attendees involved and the poor animals were very well behaved with so many pairs of clippers on them.

Clive took on the stock judging and as always even the youngest person gave his reasons.

When everyone had finished the washing and buffing, it was time for the fluffing. Rich was very thorough in explaining all different products and then the attendees working in pairs turned out their beasts for the show ring. It’s always interesting to see who takes on board how different products work on different coats. Rich, Nick and Andrew are always on hand to give some tips.

As always the day finished with the ring craft. Nick gave a demo and the participants were asked to point out what he was doing right and what he was doing wrong which was very entertaining. The youngsters got to have a go and it is the bit where they all come into their own.

Another fab workshop with thanks to Ed and Claire Jones, Andrew Hughes (who broke all the cattle as well being the assessor), Nick Hill, Richard Ashenden and Clive Davies.

A little breather before the next one in the south east of England where the training line up is all new for this year! I hope they know I can sometimes be bossy.