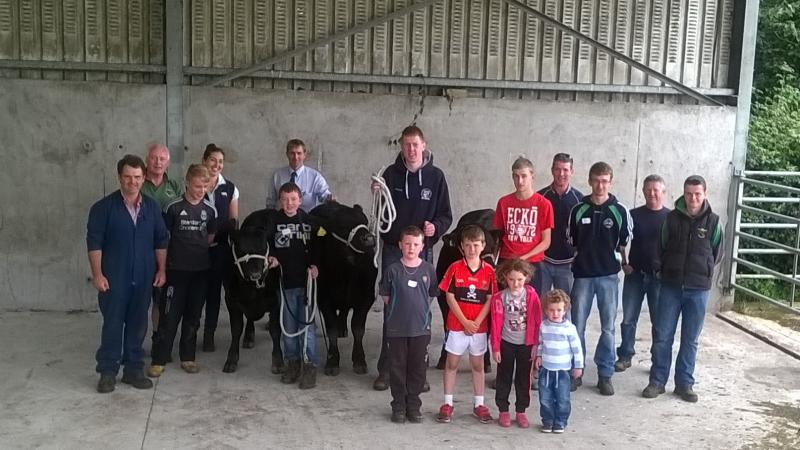 When it comes to the Republic of Ireland you can only organise so much and the rest just sort of happens!? The Munster Club Members under the leadership of Secretary Edward Dudley, work hard to get participants there and as always there is a big mix of those that do a lot with cattle and want to get through to the final and those that are just keen to get started in showing and need some tips.

The first workshop in the Republic of Ireland for 2015 was hosted by John & Kate Tait. John is currently President of the Irish Aberdeen Angus Society and a very good supporter of the YDP. The Taits have hosted numerous times so know exactly what to expect.

There might not have been a huge turnout but those that attended were full of enthusiasm. The training team consisted of Matthew Goulding from the Gouldings herd of Angus & Herefords, Matthew is no stranger to the YDP having done lots for the programme over the years and is widely known throughout the pedigree world in Ireland. We feel that it’s always good to get some different ideas at the workshops so this year we added Nichola Osgood from Kent to the proceedings. Nichola was new to our team for 2015 and started her training experience at the SE workshop. She might not have had the years of experience of some of our trainers but she has a very natural way with young people as well as cattle!?

We started with the washing and by the time we finished the participant numbers had grown! Nichola took the washing and with some participants that were extremely nervous it was a good way to gain some confidence. Matthew went onto show how to dry the animals, then clipping and a bit of halter changing whilst the cattle were in the crush. Nichola did some quick release knot tying, a bit of halter changing and also some stock judging training – most of our trainers have to be a jack of all trades. Matthew and his wife Rita judged the cattle and listened to the reasons. The senior in attendance clipped and dressed an animal from scratch under the watchful eye of Assessor, Michael Kirby. Michael judged the dressing section of the 2014 final and came on board for the day however I think he would’ve been happier handling the cattle more than the clipboard!

Dressing was covered by Matthew, showing all the different products and how they can be used and then everyone had an animal to dress and Nichola had the job of looking after all the little ones! It’s quite interesting to see how different Irish ideas are to the Scottish and English ones. The day finished with ring craft and Matthew again ran through some tips to get to the top of the class and it’s always great to see the ones that were nervous at the start have a go at leading a beast.

Another great workshop with thanks to John & Kate Tait, Matthew Goulding, Nichola Osgood and Michael Kirby.

Next workshop is back in Scotland and a new location in the Borders – lets hope we can make the Borders workshop a permanent fixture in the YDP diary.