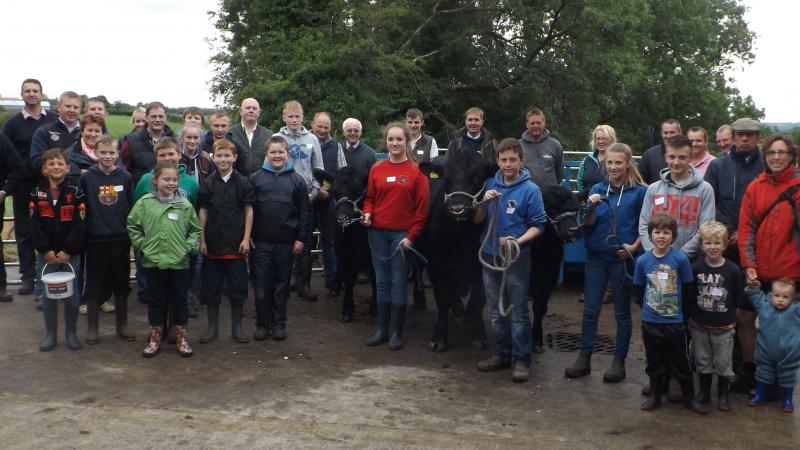 YDP always gets a tremendous amount of support in Northern Ireland and Alan Morrison has helped me for many years get things organised. This year Alan and his family offered to host the workshop and I hope it wasn’t too much pressure on him! We had great sunshine in The Republic of Ireland the previous day but the same couldn’t be said for this workshop but then a bit of grey weather never dampens the spirit.

Alan and his wife Naomi run the Drummeer herd at Maguiresbridge, Co Fermanagh and they were certainly great hosts. Alan had gathered together a great team of trainers and helpers and almost too many for me to mention for fear of missing anyone out!

18 participants joined us for the day and were treated to a fabulous workshop. We split into 5 different work stations. Ian Rea – stockman at Old Glenort did the body clipping demo, explaining where and what to clip to improve an animal. Michael Kirby, fresh from his first appearance as a YDP trainer the day before in Mohill did the halter changing and knot tying. Stewart & Nyree Baxter, more at home with showing Ayrshires but weren’t bad with beef cattle went through the washing & blowing workshop, the Baxters were aided by Frank Moores when the number of smaller ones got too many! Resident YDP stock judge extraordinaire Clive Davies did the stock judging (well we had to make use of him whilst he was over!) and a multitude of helpers from the Northern Ireland Club including John Blackburn, Alan Morrison and Ian Browne did the head clipping.

Again it was helpful to have two assessors present on the day, Marie Louise Ryan & Andrew Hughes are able to cover the different aspects of the workshop to fill out the assessment sheets and we can also split into smaller groups which mean that no one is waiting around to get involved in things.

The afternoon saw Ian Rea and Mike Kirby do the ring craft, explaining what would be expected when showing and a few tips to get the best out of your animal. Even the youngest participant was able to have a go at showing an animal with the aid of the numerous helpers we had on hand for the day. Ben Sinnamon had been invited to join the workshop for the dressing seminar. Ben owns the Aughafad Charolais herd and was great at explaining the different products and how they are used although he might not be used to the carnage that black soap leaves behind . . . . over everything!