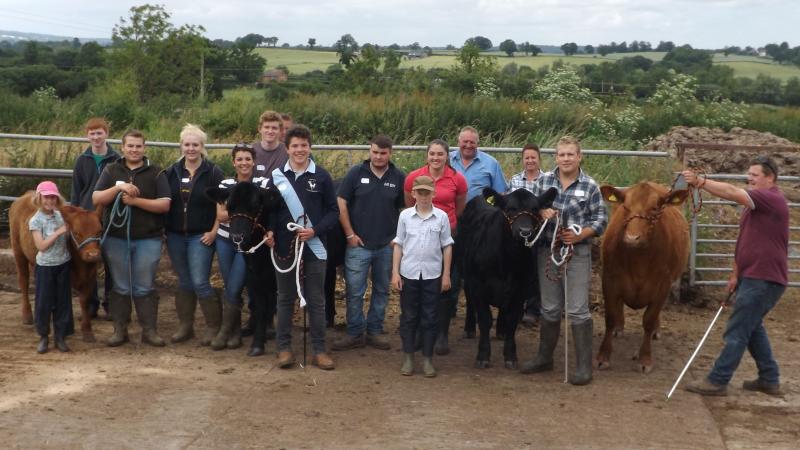 The Melview workshop usually signals the start of a heatwave and a very good time to cut hay! This year was no exception – we had lovely sunshine with just enough breeze to make it pleasant working conditions and enough keen participants to make it a great day.

This is the third year we have kindly been invited to Paul & Kirsty Westaway’s Melview Herd of Angus. Paul is such an enthusiastic supporter of everything to do with Angus and young people and is such a positive chap to have on board.

I’m not sure how I managed it but with 3 trainers two of them were called Paul, and I couldn’t even use initials as both were PW! First of the Paul’s was Paul Walker, a fresh face for 2015 but has already proved his worth at the Glympton workshop this year. Paul is a freelance stockman and not only is good at stock work but alos pretty good at training young people too. The second Paul was Paul Westaway who took the stock judging seminars. Paul has a background in the dairy industry which seem pretty hot on reason giving and public speaking. The third part of the team was freelance stockman Julie Rooks. Julie has been involved with the YDP for a number of years and really came into her own at this workshop.

14 participants joined us for the day and all were very enthusiastic and keen especially the ones who travelled from Carlisle & Hampshire to be there! We started off splitting into 3 groups. Julie took the washing, blowing, halter changing and quick release knot tying (yes we did leave something for the others to do!) helped by assessor Andrew Hughes who made sure everyone was up to scratch with the halters and knot work. Paul Walker took the clipping, he’s very good at getting the young people involved, all get some good old fashioned hands on experience and we even saw Paul on his knees! Paul Westaway took the stock judging and the youngsters seemed to enjoy discussing cattle with him. The staff at Melview tried to paint A,B,X & Y on the animals but it ended up more like a work of art! The senior in attendance clipped and dressed an animal from scratch under the watchful eye of the assessor.

Paul Walker took the dressing seminar, explaining what products should be used on different coats and then everyone had a go at dressing a beast – everyone always loves soap but it’s not always the best for the animal’s coats and assessor Andrew always walks around asking if they have made the right decision and what would they do differently. The trainers are also on hand to give some advice too.

Julie took the ring craft session and explained what she would expect exhibitors to do in the ring whether it was for junior handlers or for breed classes. This is always the bit that everybody loves and comes into their own but hopefully the day teaches the participants that an awful lot happens before you hit the ring!

Another great workshop with thanks to Paul Westaway and Family, Julie Rooks, Paul Walker & Andrew Hughes.

Next stop on the magical mystery tour is home territory for me in Cornwall and I’ll wait to see whether we’re amidst the heat wave or the thunderstorms – hopefully the first one!