Aberdeen-Angus Cattle Society > YDP Article > An insight to the hosts and trainers at the Scottish Borders workshop!

An insight to the hosts and trainers at the Scottish Borders workshop! 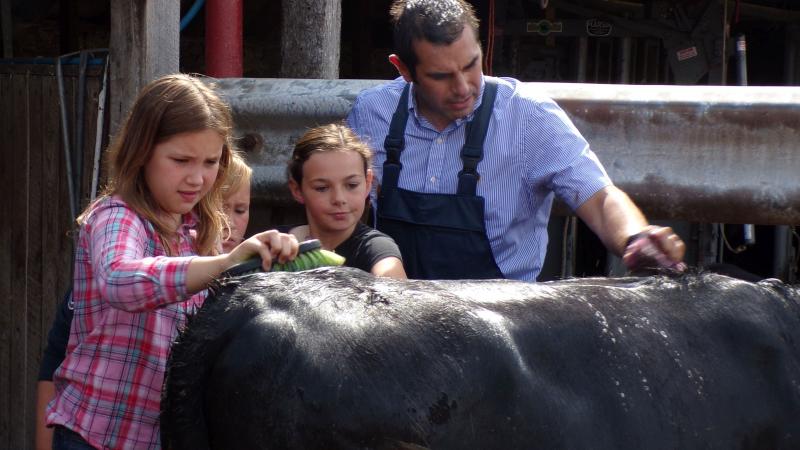 August 5th saw a visit to James and Debbie Playfair’s Tofts Herd at the Scottish Borders workshop. James and Debbie have both been involved with the YDP before, but it was their first time hosting an event and it was great! James and Debbie do not show their cattle so they had to halter break the heifers specially for the occasion for which we are hugely grateful.

We had some great talent on the list for training all very successful with various breeds of cattle with some new additions to the YDP which is always great. Mark Phillips – freelance showman has helped us before and was also a dressing judge at the final in 2017 and I think he enjoys our events as much as we do! James Playfair also got involved with some training too and is an expert at stock judging training. Alan Lawson, owner of the very successful Hallington Herd of Aberdeen-Angus joined us for the first time and was a great addition to the team. Another new addition to the training team having judged the dressing at the 2016 final was Robert Wilson from Romany Herefords, Robert is getting used to the training lark after opening up ‘Fluffy Moos’ which offers similar training to YDP but for any age. Assessor for the day was Harry Emslie who took notes on the participants aptitude and attitude throughout the day to fill out the score sheets to give valuable feedback.

We had 11 participants join us for the day and all were hugely enthusiastic. We started the day with a meet and greet and then split into 3 groups. Alan did the dressing session, showing how all the products are used to their best advantage and then everything was covered from top to toe in black soap and foam! Robert did the clipping workshop taking an in-depth look at clipping and everyone will have picked up some great tips as Robert has been learning some new tricks in Canada. Mark did the washing and knot tying – Mark had a great idea for the older participants seeing as the cattle hadn’t seen so many people they were all pretty quiet but starting them off took a wee bit of time and patience so each participant picked an animal and worked away quietly by themselves to get them clean and tidy. It was a great way to see them bond with the animal and get the best out of them.

After lunch James took everyone through what they should be looking at in a breeding animal and how to put some reasons together and then everyone had a go at judging the animals which is always fun.

We ended the day with the ring craft and Robert took everyone through what he would do and expect to see in the show ring and everyone got to have a go. It’s always great to see the confidence that has grown throughout the day and end on a high.

We are very grateful to the Playfairs for putting on a great event and to the trainers for giving up their time (especially on a very sunny day ideal for harvest!) and giving the participants such a great experience.

Some photos from the event are shown below: