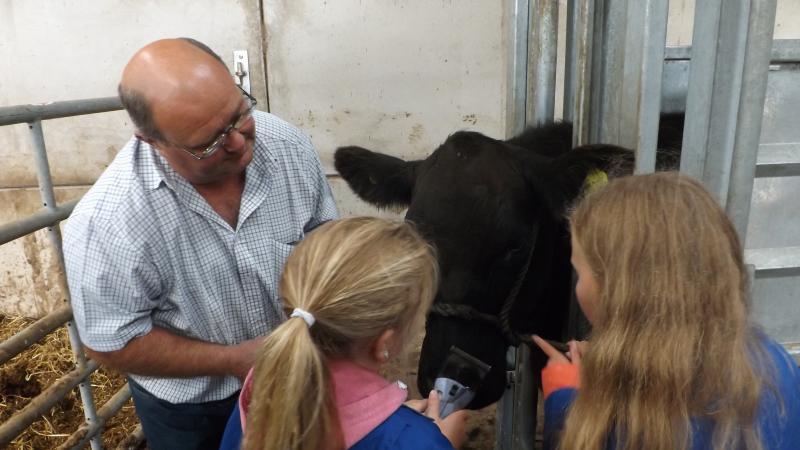 The Central Scotland workshop is always one of the biggest ones of the year – it takes a bit of organising it’s a fair job to keeping 20 + participants occupied and making sure they all get the chance for hands on experience and that means we need a fabulous team, good facilities and plenty of haltered cattle. Netherton ticks all these boxes and we very much appreciate Highland Wagu and The McLaren family for letting us use these facilities year on year.

Now with great facilities and numerous cattle we need a plethora of trainers so we can work in small groups and keep everyone out of mischief! The dream team were made up of some new faces for 2015 and some stalwarts of the YDP. So in no particular order – we welcomed Harry Emslie to the list of trainers for 2015. Harry is better known for his Limousins and commercials but he does now have several Angus on his farm too. Harry and his wife Lynwen judged the final in 2013 so we thought we’d put his skills to the test and he certainly passed with flying colours!  We couldn’t have a Netherton workshop without Roy Crocket getting involved – Roy a freelance stockman from the Borders has some very unique ideas and there is always a lot of laughter coming from his seminars. Jim Smith is another trainer who is passionate about the YDP. Now stockman with Simmentals Jim has helped YDP on many occasions and is great at helping the youngsters to get involved. Another new face for 2015 was George McCulloch. George looks after the Shorthorns and Wagu for Highland Wagu so it was a real HW team effort for the day. Last but by no means least was George MacFadzean – George has helped us out this year with the stock judging and the youngsters seem to find him very entertaining and of course informative.

With 22 attendees we started the day in small groups – Jim did the washing and blowing at great first step at handling animals for beginners and a good way to see how the more experienced participants work with cattle and others. Harry did the dressing covering all the products and how best to use them. George McCulloch did the clipping, explaining what needs to be clipped and what should be left on to make the best of every animal (difficult with summer coats!) Roy did the halter changing & knot tying, an important workshop for safety reasons but always fun when done by Roy and George McFadzean did the stock judging, where the kids must have given some persuasive reasons as even Georhe nearly changed his mind by the end!

With so much happening at the same time we needed as many assessors as we could get to keep up with the scoring and Andrew Hughes, Bert Taylor and Marie Louise Ryan did a great job at the assessing as they have throughout the year.

As with every workshop we ended on the ring craft. Harry gave an insight into how to get the best out of an animal and what judges look for in the show ring. It was great to so many trainers to help out as even the not so confident ones got to have go and all did really well.

This workshop report seems very short but at Netherton we have everything down to a fine art now that all the subjects are covered thoroughly but with great efficiency!

This workshop is no mean feat and there are many thank you’s to do – First & foremost our hosts Highland Wagu (Moshin & Martine) and the McLaren Family and then all our trainers, Roy Crocket, Harry Emslie, Jim Smith, George McCulloch, George MacFadzean and not forgetting the assessors Andrew Hughes, Bert Taylor & Marie Louise Ryan

We said our goodbyes and headed off to the North of England for the last workshop of 2015.