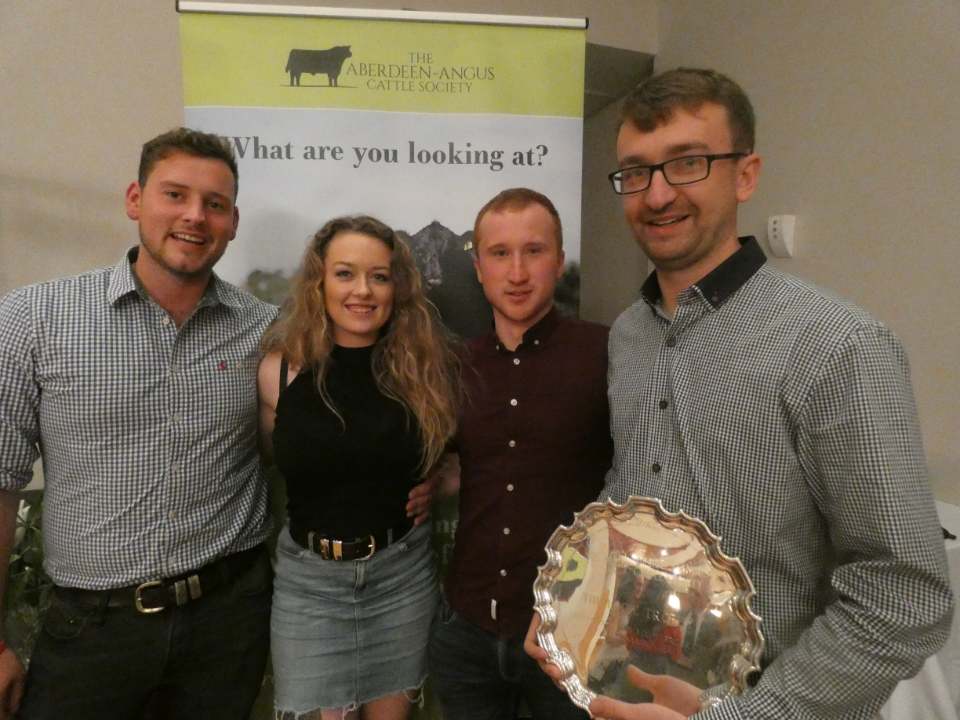 We caught up with 2019 YDP winner Bryan O’Halloran to hear about his experiences of being part of the YDP programme, his reaction on winning the final and plans for the future…

• What is your background?

“My name is Bryan O Halloran, I am 24 years old and I am a first generation Aberdeen-Angus breeder. I began breeding Aberdeen-Angus in 2006, establishing the Briarhill Aberdeen-Angus Herd alongside my Uncle Tim. I have gained some valuable experience during my relatively young career working with cattle, along with gaining some very beneficial qualifications along the way. I am a past pupil of Cork Institute of Technology, where I graduated with an Honours degree in Agricultural Science. In July 2018 I began working with Greengold Farm Advisory Services in Macroom, County Cork. Here we provide a wide range of services for all categories of farmers, which includes Financial Planning, Basic Payment Scheme applications, Knowledge Transfer scheme/facilitating discussion groups, Grant applications/farm buildings and equipment, environmental schemes, soil sampling, feed analyse and last but not least lecturing in a nearby Agricultural College to the up and coming young farmers.”

• Do you have any other interests outside of agriculture?

“I have a huge passion for GAA, both hurling and football. From a young age I have always had a hurley or football in my hand, however, last year and due to a recurring injury had to become an armchair hurler, I miss the competitiveness of the game, but I still enjoy supporting the club and county. I also enjoy the odd game of Golf in my spare time.”

• How did you get into farming?

“I discovered my passion for farming at a very young age. Farming and the love of animals is in my genes and was instilled in me from a young age as my grandparents were farmers. Sadly I never got to meet my grandfather but my grandmother and grand uncle were hugely influential in developing my interest in farming and played a huge part in my life. I had to be stuck in the midst of all that was going on. Some of my earliest memories include collecting the eggs from the hens and shadowing my grand uncles every move carrying out the daily work on the farm. It was near enough a natural progression that I would be involved in farming.”

“In 2006 I purchased my own cow with a bull calf at foot while still in school and that bull when sold bought my second cow. Over the years I’ve had some success showing at agricultural shows with the progeny of these cows, my highest accolade was 2nd in All Ireland bull class. This bull was then sold and he went to the home of the Angus, back to Scotland, something I am very proud of considering the short time frame I had been breeding Aberdeen-Angus cattle. As I progressed in secondary school showing the animals was put on hold because of study, exams, deadlines etc. This year I returned to the show circuit and again captured a 2nd place in the All Ireland Final Intermediate bull class. I was happy with this result as this was the progeny of a cow I bought in Stirling in October 2018. In 2019 I had the excitement of calving down my first two Embryo Transfer calves which were purchased from HW & Netherton Angus which are renowned worldwide for producing top quality Aberdeen-Angus Cattle. After a successful breeding season my aim is to calve down 40 Purebred Angus cows in the autumn of 2020, so this will give you a perspective of how far the Herd has come in a short space of time and my knowledge of Angus Cattle.”

• How did you get involved with the YDP?

“I started showing back in 2005 at Bandon Show with the Burke Family of the Clontead Herd. My father worked with Eustace Burke Snr in MSD pharmaceutical plant and I showed a Clontead baby calf for them that day. From then on my parents and the Burke family started bringing me to agricultural shows the length and breadth of the country after that. At each show they entered me in the Young Handlers class which I had some great success in over the years. From this I progressed on to attend the Aberdeen-Angus YDP workshops held in the Munster Region where I learned an array of different skills. As I gained more experience and confidence over the years I began to qualify for the YPD finals held each Autumn. It was a great honour to represent my region at the grand finale. I competed once in the Junior Section, twice in the Intermediate Section and once in the Senior Section in 2019.”

• What are your thoughts on the programme?

“Open to young future farmers of all breeds and backgrounds, the Aberdeen-Angus YDP brings together the youth of the industry to learn lifelong skills and gain experience from some of the most capable and successful trainers and stockmen and women from around Ireland and the UK. The young people who participate in regional workshops, get the chance to attend educational and insightful conferences and future leader programmes, learning skills that can be utilised in their future careers in the Agricultural Industry. With the recent introduction of regional co-ordinators, there is much more of a local focus in regard to volunteers and facilities used with strong input from the local Aberdeen-Angus clubs, allowing for a real community buy-in to the programme. I think the senior conference is a great way for older participants to broaden their industry knowledge, giving them a better understanding into both commercial beef production, Pedigree breeding and an insight into the supply chain and the challenges they may face.”

• The Final Weekend in Drumshanbo

“I was the oldest member and team leader of the Irish participants who took part in the finals. We built up great camaraderie over the few days and did very well in the overall prize giving, the best result yet for an Irish team at the YDP finals. In the run up to the final I had personally put in huge preparation for the event. Public speaking now comes naturally to me due to my experience as an Agricultural lecturer and aiding in the facilitation of Knowledge Transfer meetings. In 2019 I also became an Aberdeen-Angus National Council member, the youngest member of the council and in 2020 I was elected as Vice-chairman of the Munster Aberdeen-Angus Club. The busy year on the show circuit in 2019 certainly aided me in the Cattle preparation and handling sections. When all the hard work was done one must not forget one of the most important fundamentals in life, talking, making new friends and learning from other people. I am sure all participants would agree they have made lifelong friends through the YDP.”

“Thrilled, absolutely thrilled, it was my last chance of competing in the Senior Section and I was chasing a dream which had eluded me until 2019.”

• What are your plans now since you won last year’s YDP final?

“It took a while for the success to sink in, for the few weeks after the event it was straight back to work and finish off the calving season as we are an autumn calving herd. As previously mentioned, attending shows with the Burke family and visiting herds across the country from a young age gave me a taste of visiting new places. It had always been in the back of my mind to extend my travels overseas to the likes of North America & Canada to experience what farming is like in these parts of the world and study some of their breeding programmes. By winning the Senior Section of the YDP it has enabled me to fulfil this lifelong dream. Of course due to the current Covid-19 circumstances these plans have been put on hold but it has also given me a chance to carefully sit down and map out where I plan to go.”

• What are your plans for the future?

“As mention previously I’d really like to visit other countries and learn from their cattle breeding processes. On my travels I would also be in search of some new exciting outcross bloodlines to introduce into my herd in an attempt to bring my herd to the next level.
I would also love to become involved in helping out and delivering workshops within the YDP to young cattle enthusiasts to impart some of the knowledge I have gained throughout this hugely beneficial programme.”

• Do you have any words of advice for any other young enthusiasts?

“What are you waiting for? The YDP programme helps in providing a skill set which otherwise I would not have. Meeting new people, developing skills and confidence, visiting farms, seeing great cattle and potentially travelling the world. Since the programme is open to all young people and not just Aberdeen Angus breeders, I couldn’t recommend it highly enough.” Winning the 2019 YDP Final at Drumshanbo. 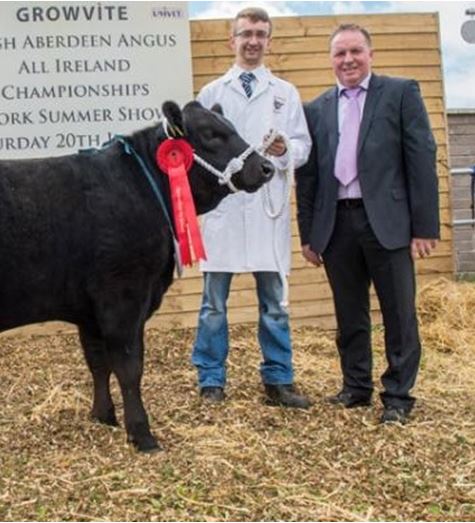 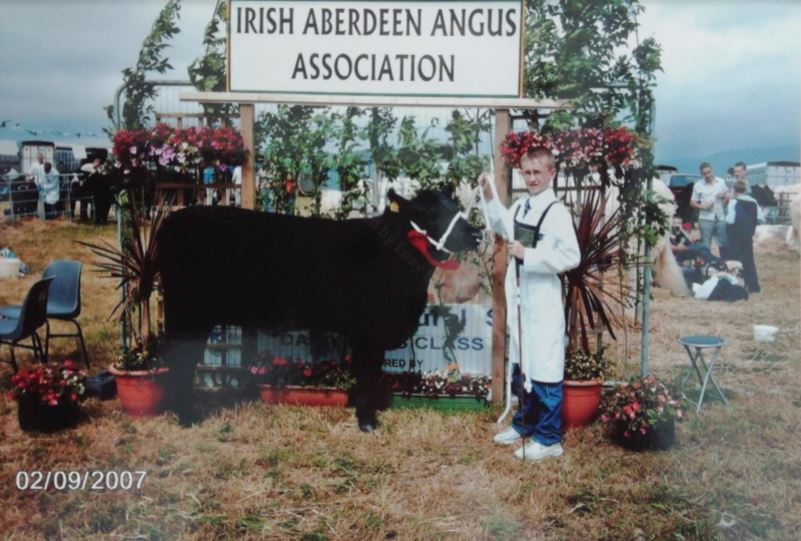 We extend a huge congratulations to Bryan on his brilliant achievement! Good luck with all your plans for the future and thank you for taking time to talk to us about your YDP experiences. We look forward to keeping track of Bryan’s future and budding career in the world of agriculture.