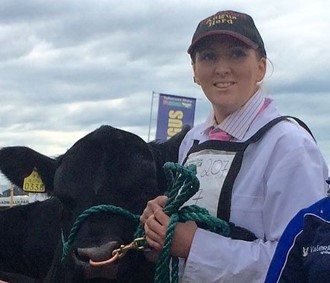 Irish Aberdeen-Angus Association – Announcement of the Appointment of a General Manager:

It is with great pleasure that the Irish Aberdeen-Angus Association is in a position to announce the appointment of a General Manager to oversee its operations and newly licenced Herd Book in the Republic of Ireland.

Dr Felicity McGrath Ph.D. BSc, who farms in partnership with her mother in Ballinasloe in County Galway brings with her a multitude of skills, a background in sales, business administration and management to mention just a few which will be essential as the new company embarks on its post Brexit journey.

Patricia, Felicity’s Mother, is a Dubliner who took enthusiastically to country life after she inherited her uncle’s farm some 20 years ago. When she took over the farm, there were plenty of challenges.

“The cattle were hard to handle. My uncle had kept a lot of crossbreeds that lived up to their name in being very cross! We weeded them out over time” she said. And following a brief sortie with a continental breed up to 2008, settled with Aberdeen-Angus and made them the future of their enterprise and regularly appear on the show circuit with their Gortnalon herd.

Felicity – who did a PhD in physics at Imperial College London, subsequently worked in the UK for six years, and returned to Ireland in 2018 and managed Athenry based agri business Bo Steel which manufactures and sells agricultural livestock equipment.

Felicity puts her physics expertise to good use on the farm, designing her own cattle weighing crate and cattle training pens. “I find physics great for problem-solving,” she said. This will, we are sure stand her in great stead with the job she has now in which taking a logical approach to resolve situations which she may come across will pay dividends.

In a previous life Felicity was involved in an international role and travelled extensively on a global scale on frequent long-haul flights, she just wanted to be home with the cattle adding, “I would sooner be up at 3:00am to watch a cow calving than sitting in a hotel room.”

She does not miss the airports, but this experience will stand her well again with the future development plans for the IAAA. John McEnroe, the current president of the Irish Aberdeen-Angus Association added,

“We are very confident that Felicity will bring a new dimension to the Association, her enthusiasm, experience and willingness to just get stuck in will be an asset to the members of the Association in the months and years to come”.

The appointment puts us on the map confirms the commitment that the Association must be a successful stand-alone breed Society and business after being under the wing of the Aberdeen-Angus Cattle Society in the UK for some 125 years.

Felicity starts with the Association on the 29th of March 2021 and will be working with Kathryn Bradshaw, the Council and the Presidential team to get up to speed as quickly as possible with the new business and looks forward to getting out and about when the restrictions allow to meet as many of the members and stake holders as possible.

President of the Irish Aberdeen-Angus Association.