A Top Price of 10,000gns at the October Stirling Aberdeen-Angus Sale 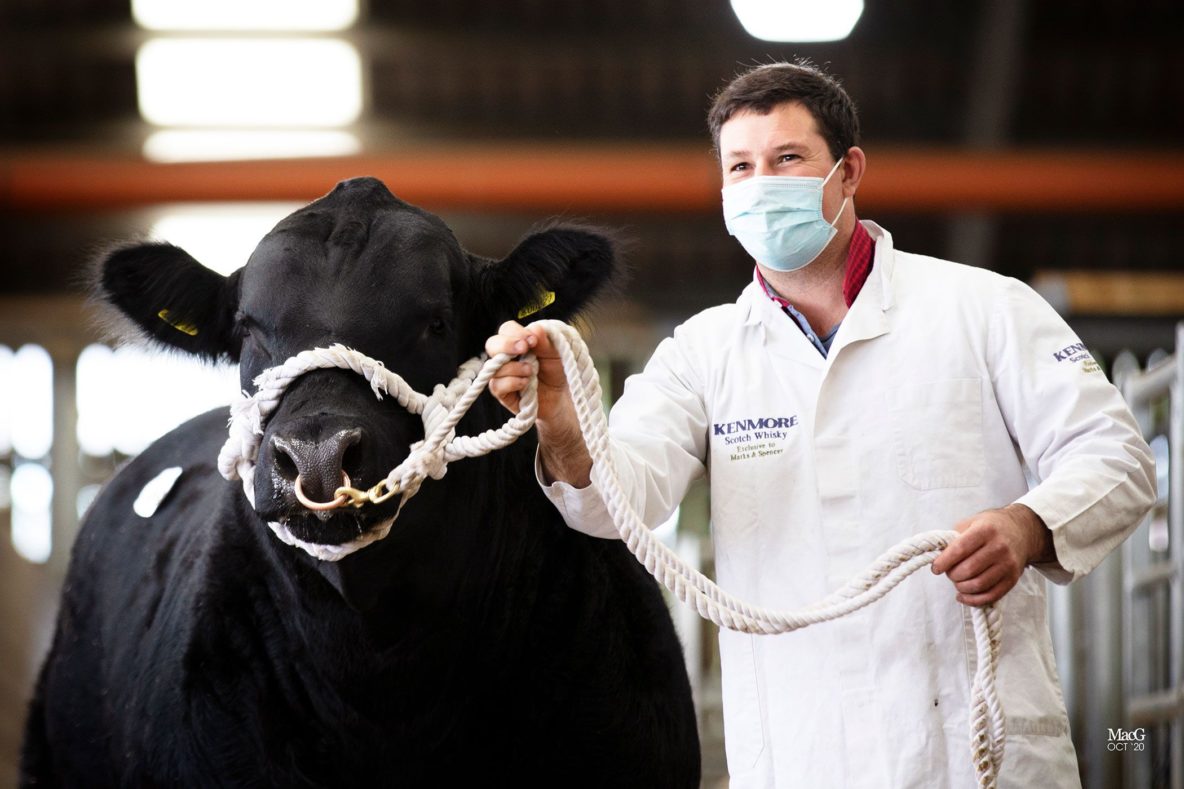 A Top Price of 10,000gns at the October Stirling Aberdeen-Angus Sale:

The autumn sale of Aberdeen-Angus bulls and females took place on Saturday 17th October 2020 saw Aberdeen-Angus sell to a top price of 10,000gns. The sale saw a 66% clearance rate and reached with 40 bulls sold through the sale ring selling to an average of £5,051 which is £455 up on the October 2019 sale.

United Auctions held the October fixture of the world-famous bull sales under strict Covid-19 restrictions, which included the cancellation of the pre-sale show, and a requirement for buyers to sit at least 2 meters apart in the sale ring and for everyone to wear facemasks at all times.

Leading the trade at 10,000gns was Ettrick Batman V227 from Firm of G Gray. The April 2019 born bull is a son out of homebred cow Ettrick Bella N122 and by Linton Gilbertines President S021 who was Champion at the October bull sale 2017 and was jointly purchased for 17,000gns with Keirsbeath Aberdeen-Angus. Batman was purchased by A M & C Ewen, Meikle Toux, Cornhill, Banff. 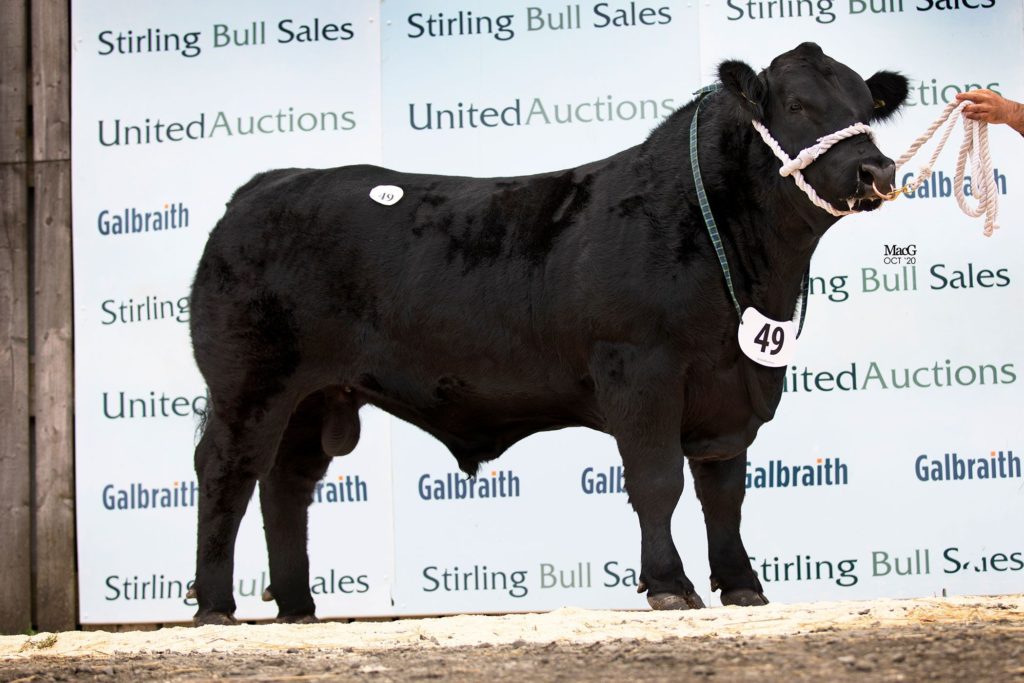 The next highest price in the ring was Foxhill Dominator V185 (ET) from Mr & Mrs M Alford who sold to A J & W M Norrie, Wrae Farm, Turriff for 9,000gns. Dominator is a is a March 2019 born bull from the Foxhill herd and is by the famous Gretnahouse Blacksmith L500 and out of Weeton Diamond Mist N383 who was purchased at the 2015 Weeton sale for 7,500gns. 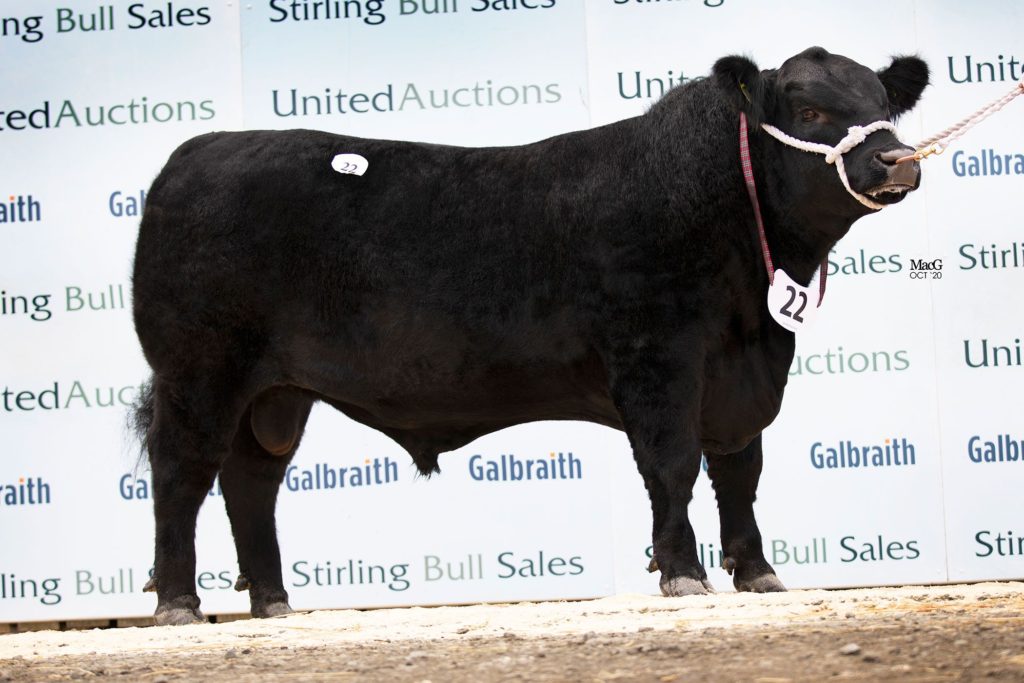 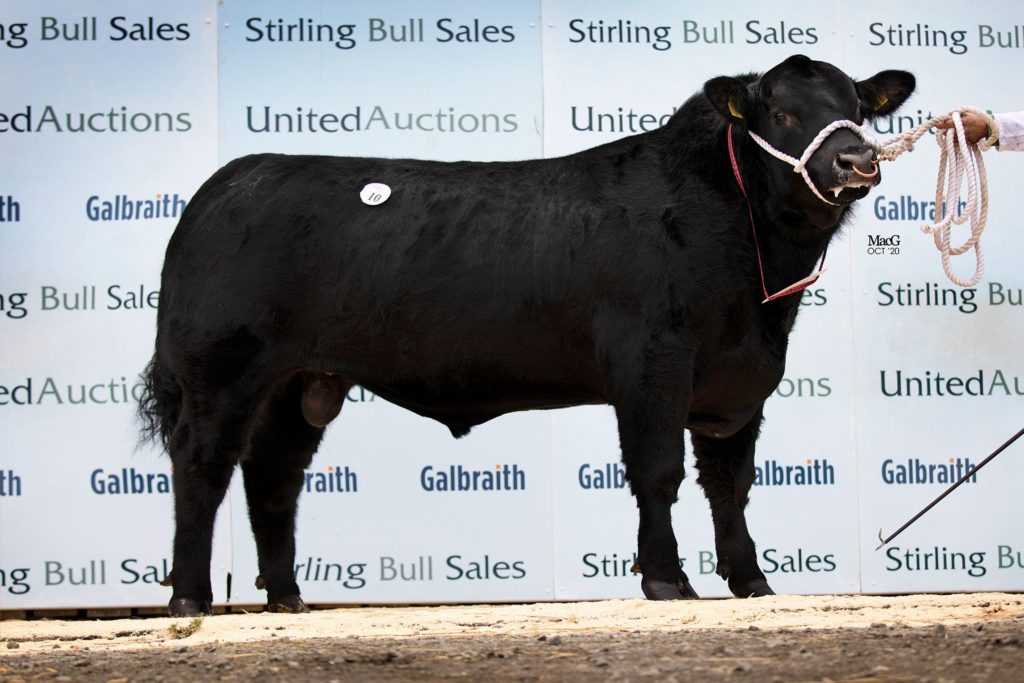 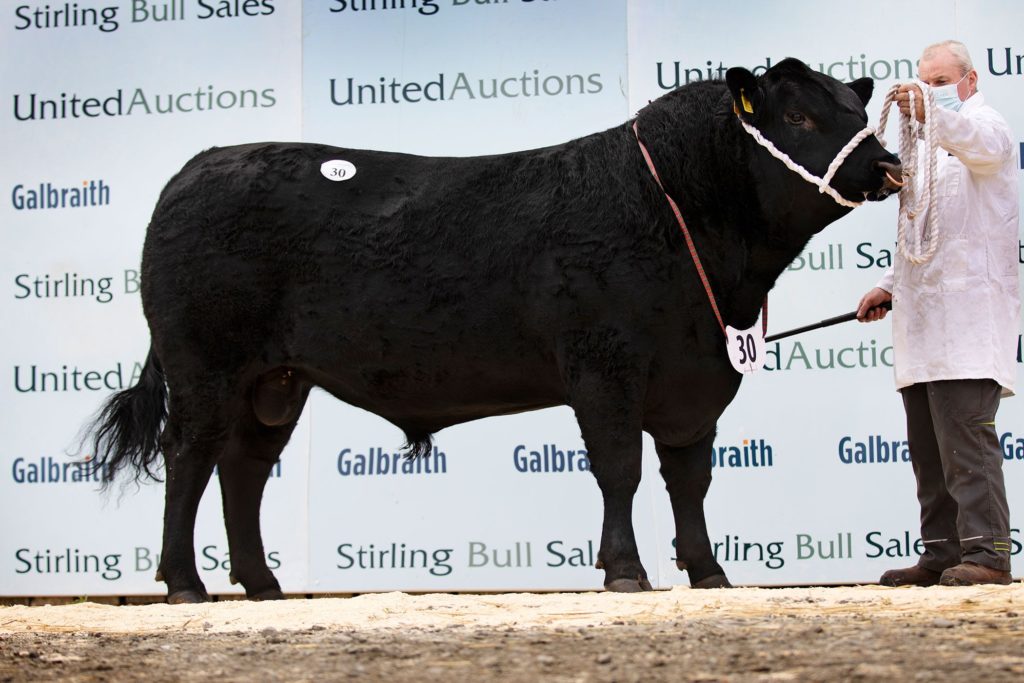 Stephick Ezra V561 (ET) from Stephanie Dick sells for 6800gns to J King, South Hill of Drips, Thorntonhall, Glasgow. Ezra is a January 2019 born bull which is by the 14,000gns Weeton Diamond Mine P444 and out of Weeton Evora P439 (ET) who was purchased for 4,200gns at the 2015 Weeton reduction sale. Ezra was Junior Male Champion at the Stars of the Future calf show as well as Junior Male Champion at the Black Beauty Bonanza in 2019. 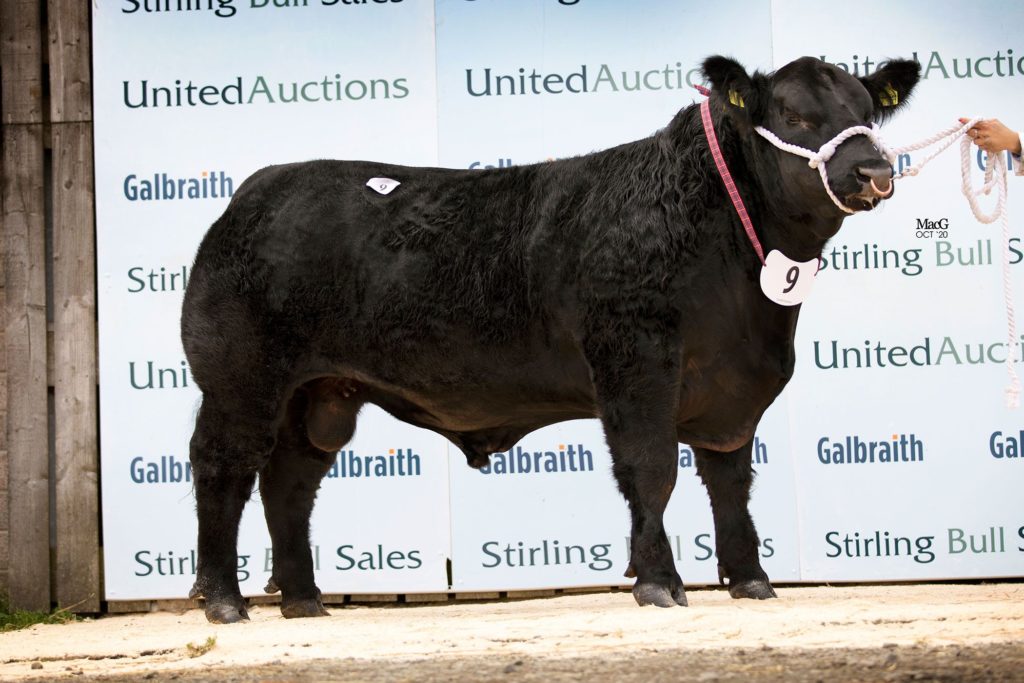 Following closely behind was Foxhill Dictator V186 (ET) who is a full brother to the 9000gns Foxhill Dominator V185 (ET). Dictator sold for 6400gns to Liam Muir, Upper Onston, Stenness, Orkney. The full brothers have a combination of blood lines from North America and the UK. 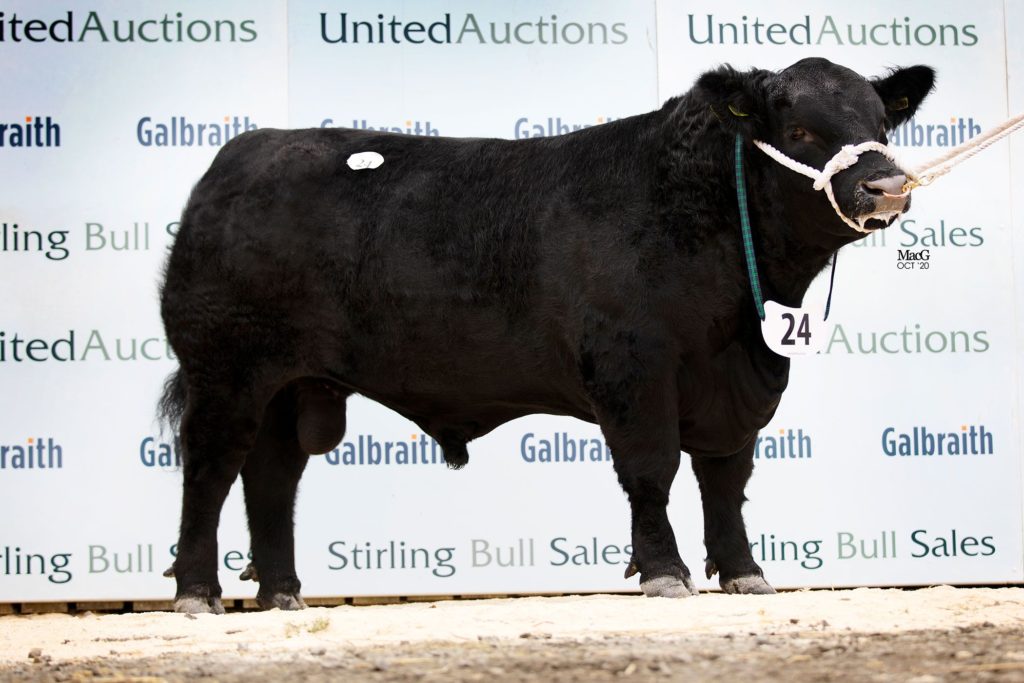 Selling for 6200gns was Roscoe Big Man V716 from Ross Farm, Big Man was purchased by Messers Ewing, Dumbretton Farm, Annan, Dumfries. Big Man is sired by Netherton Kentucky L596 and out of Schivas Beautiful Maid P255 who was purchased for 3500gns in 2018 at the Schivas dispersal. 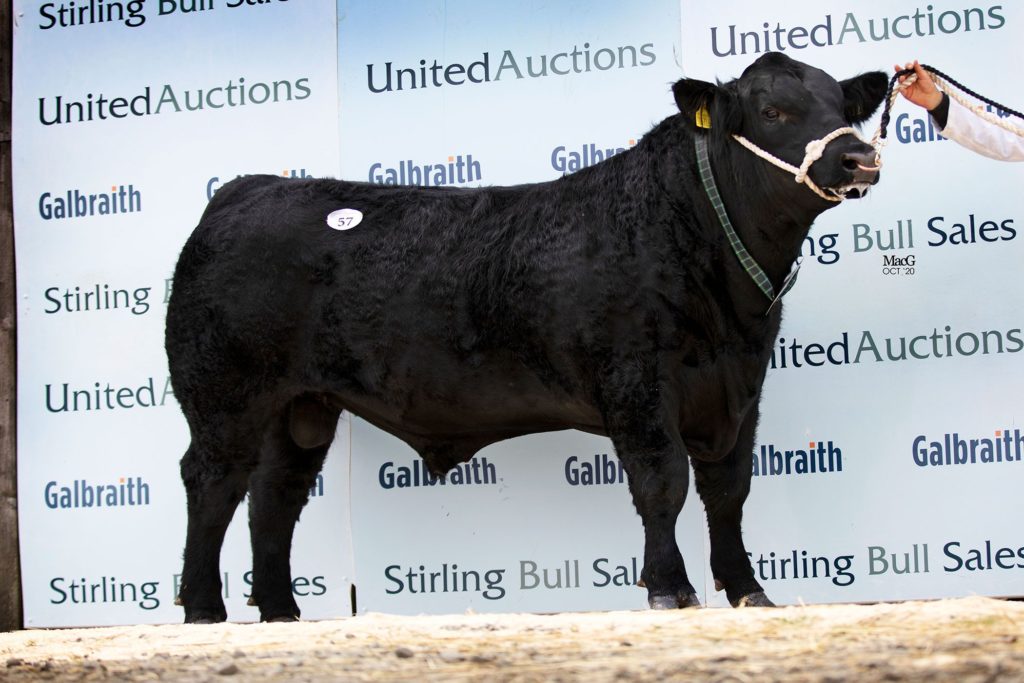 Five lots made 5,500gns. The first, selling to Easter Tulloch Farms near Laurencekirk, was December 2018 born Tonley Lord Hoffman U588 (ET), by Blelack Duke J262 (ET) from the Wattie family at Mains of Tonley.

The McCombies at Auchincrieve, Rothiemay, also made 5,500gns when they sold Auchincrieve Jekyll Eric V454 to Jim Innes, Dunscroft, Huntly. He is a March 2019 born son of Blelack Lord Hermes S765.

The last lot at 5,500gns, selling to Messers Sinclair in Orkney was Logan Bar Emperor V231 from Dunblane breeder Murray Lyle. He is an 18-month-old son of Wedderlie Kenyon N863.

In the female section, Gordon Duchess U236 an in-calf heifer from the Trustees of the Late Gordon Brooke sold for 4000gns. Duchess is by Balmachie Jack Eric R206 and in-calf to Rawburn Java Eric T567, she sold to John McWibbin in Co Down, Northern Ireland.

The sale also included the dispersal of the Weeton herd of Lancashire breeder John Loftus and a major reduction of the Brewis family’s Eastfield herd based near Kelso. 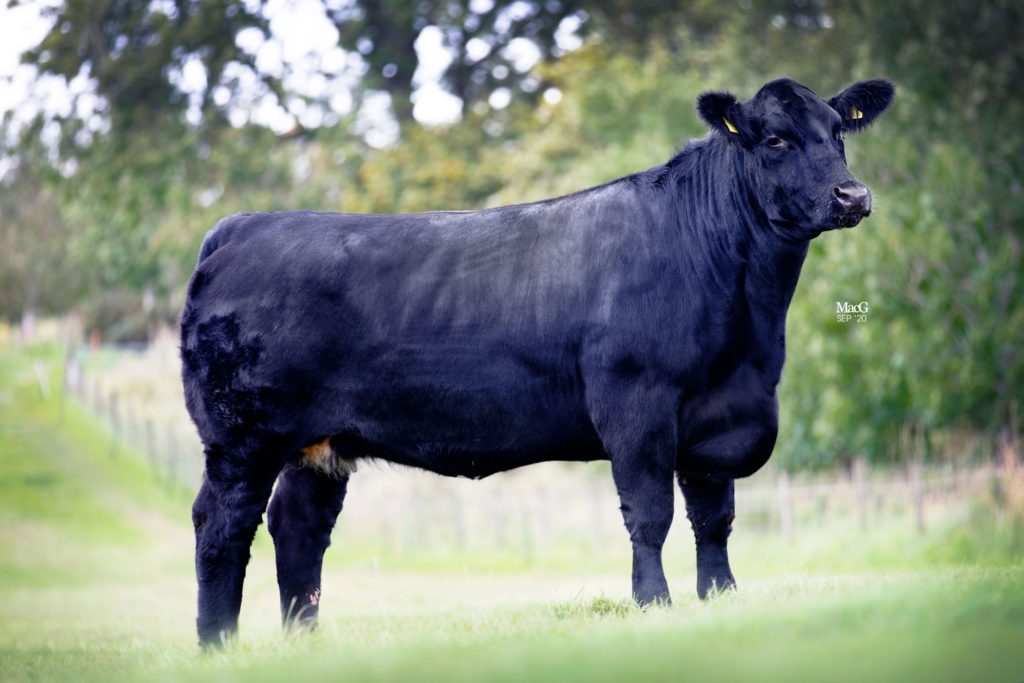 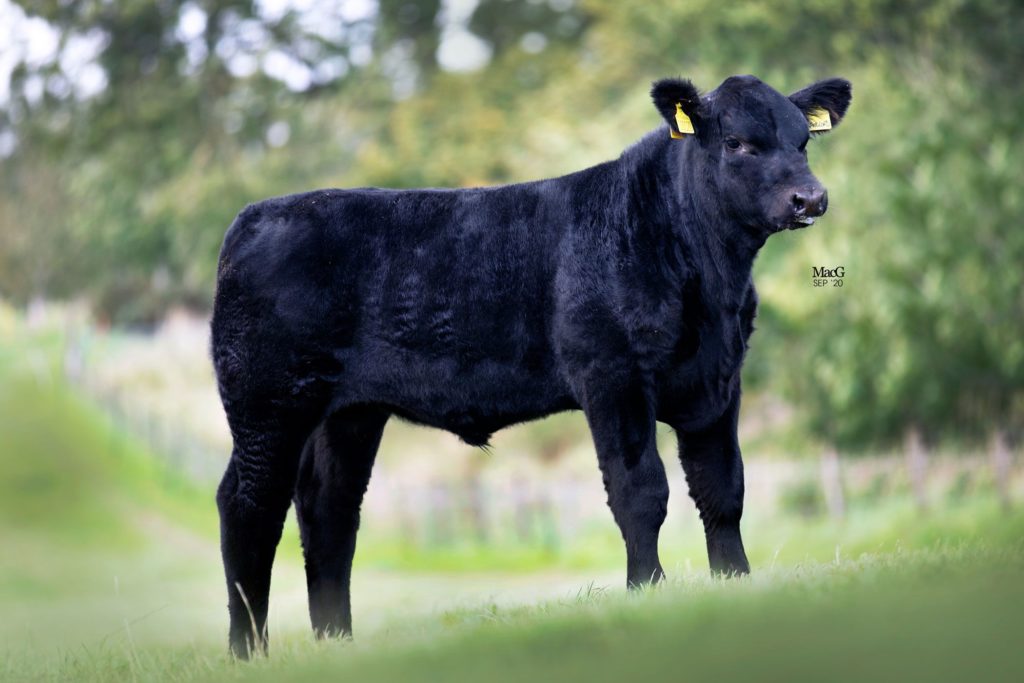 The Eastfield herd reduction sale topped 5,200gns for seven-year-old cow Eastfield Jenny N500 by Rawburn Edge J983 and her March born heifer calf Eastfield Jenny W457 which is by Linton Gilbertines Elgin T149. The pair sold to the McCornick family for their McCornick herd in Dumfries. 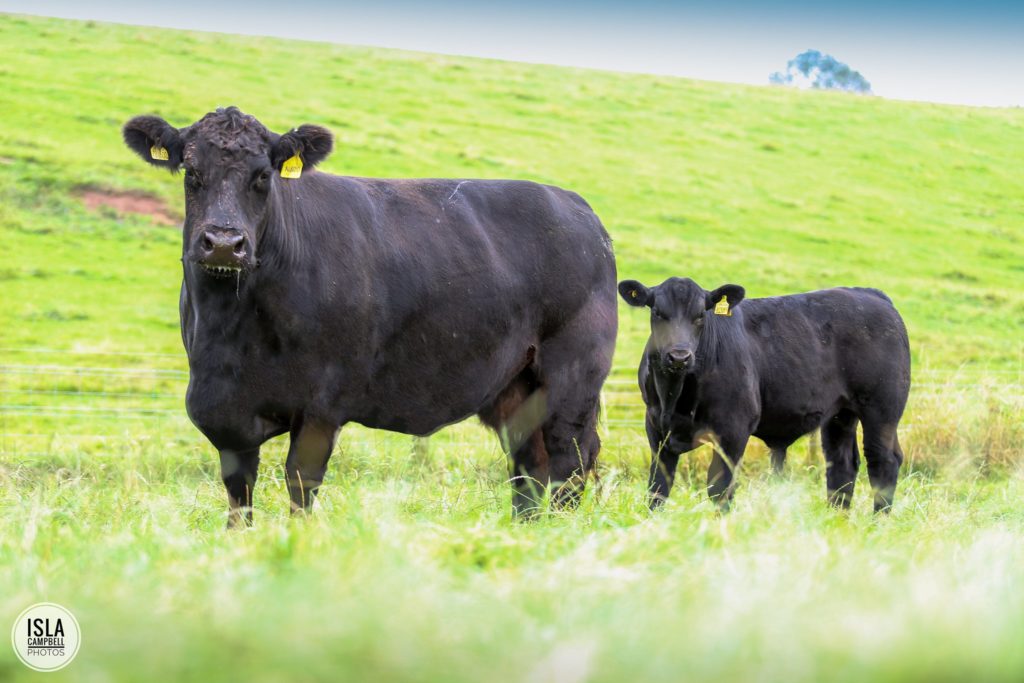 Prices from the sale