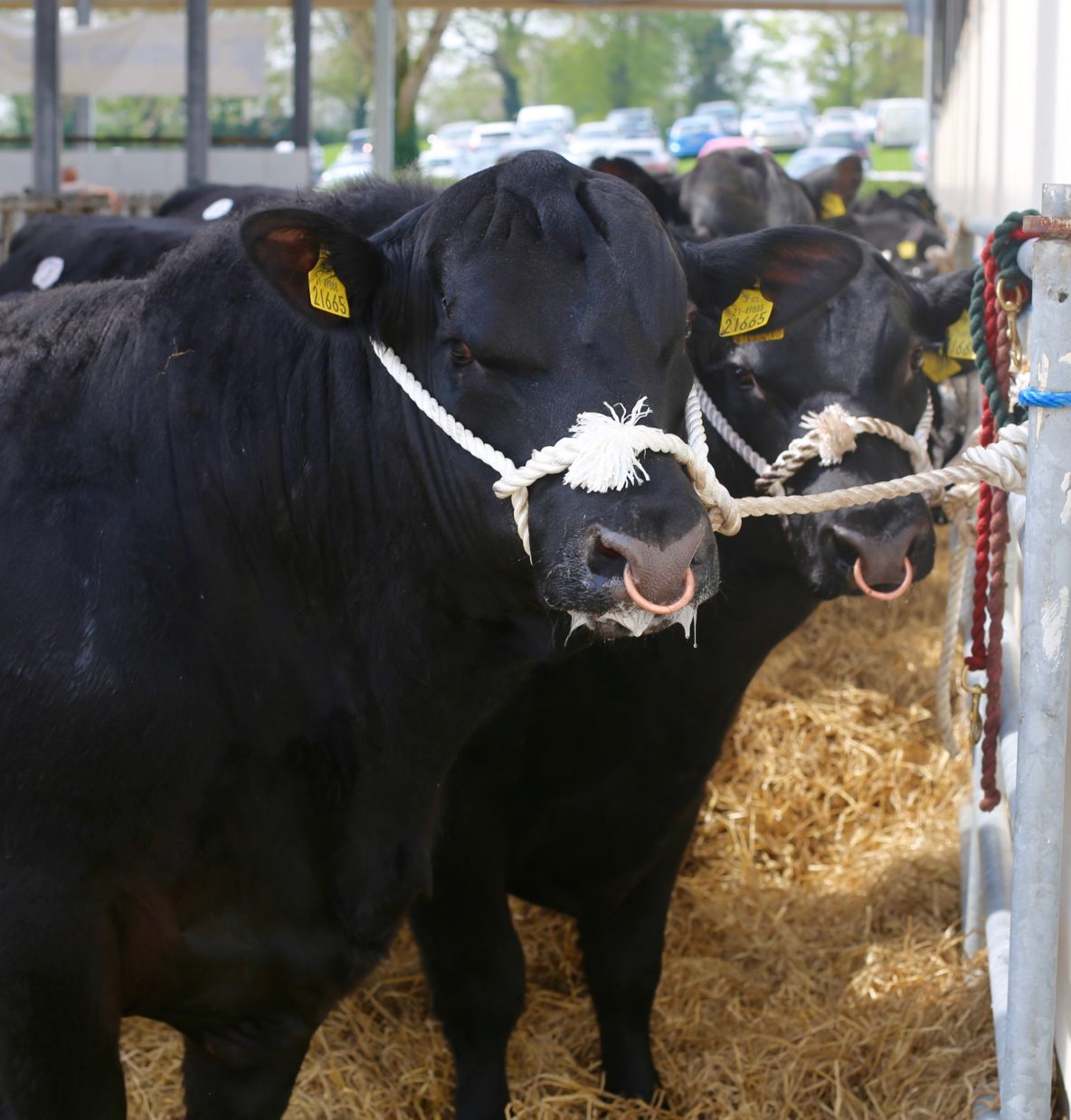 The well-known Gigginstown Aberdeen-Angus herd, owned by Ryanair CEO, Michael O’ Leary and managed by Joe O’ Mahoney and Gerry Smyth, held their annual production sale of pedigree Aberdeen-Angus bulls and heifers over the weekend. The bull trade was well improved from last year with the average price jumping from €2350 in 2018 to €2650 this year at a 92% clearance with just two of the twenty five bulls on offer failing to reach their reserve. The heifers fared even better with a 100% clearance in the sales ring, selling to an average price of just under €2600 (down from €2800 last year) with a good and sustained demand for females of all ages.

The sale topper, across bulls and heifers, was the December 2017 born Gigginstown Lord Incaid T724. This four star terminal index bull is sired by senior stock sire, Friarstown Empire J160 and is out of a homebred dam that goes back to Penguin Mr Elevate F253. This bull was one of the youngest bulls available on the day and attracted a round of intense bidding in the sales ring to top the entire day’s trading at Gigginstown.

The only red Aberdeen-Angus bull in the sale, Gigginstown Red Gaffer T687 claimed the second highest price of the day, selling for €3800. This five star terminal index bull was born in October 2017 and is sired by former three-time All-Ireland Aberdeen-Angus champion, Rosemead Karona J957 and is out of a Friarstown Empire J160 dam. This one sold to Irish Aberdeen-Angus President, Mack Crowe for use on his Broomstreet Aberdeen-Angus herd.

Gigginstown Bellini T676 secured the next best price in the male section, selling for €3500. This bull boasted one of the highest suckler beef values of the day with a five star rating across both terminal and maternal indexes. This one is sired by Friarstown Lord Big M224 and is out of Gigginstown House Baroness G470 who is sired by the Canadian bull, KBJ Conqour All 447J.

Two bulls, Gigginstown Elevation T681 and Gigginstown Sword Play T691 traded at €3000 each. Both of these bulls were born in October 2017 and were sired by the aforementioned Friarstown Lord Big M224 with both carrying a five star replacement and five star terminal index.

Rounding out the principal prices in the male section were Gigginstown Jolly Eric T696 and Gigginstown Ace of Spades T674 who sold for €2850 and €2800 respectively.

Turning to the females, all 19 heifers that were presented for sale sold on the day, with the top priced heifer coming in the form of the in-calf heifer, Gigginstown Kid Gloves T652 who sold for €3550. This one was sired by Liss Maxy R537 and was scanned in-calf to herd sire, Luddenmore King Kong S273 and carried a five star replacement index.

The aptly named Gigginstown Tiger Roll U785 whose namesake had twice won the Grand National at Aintree for the Gigginstown racing stable over the last two consecutive seasons was knocked down at €3350 to claim the second highest price in the female section. This 12 month old maiden heifer is sired by Friarstown Lord Big M224 and carries a replacement index value of €104.

Another in-calf heifer, the 24 month old, Gigginstown Decision Maker T648 sold next for €3250. This one is sired by Friarstown Empire J160 and is out of Gigginstown Days of Thunder P198, a Idvies Euxand L505 daughter and was several months in-calf to the newly acquired stock bull, Aughnamona Nando.