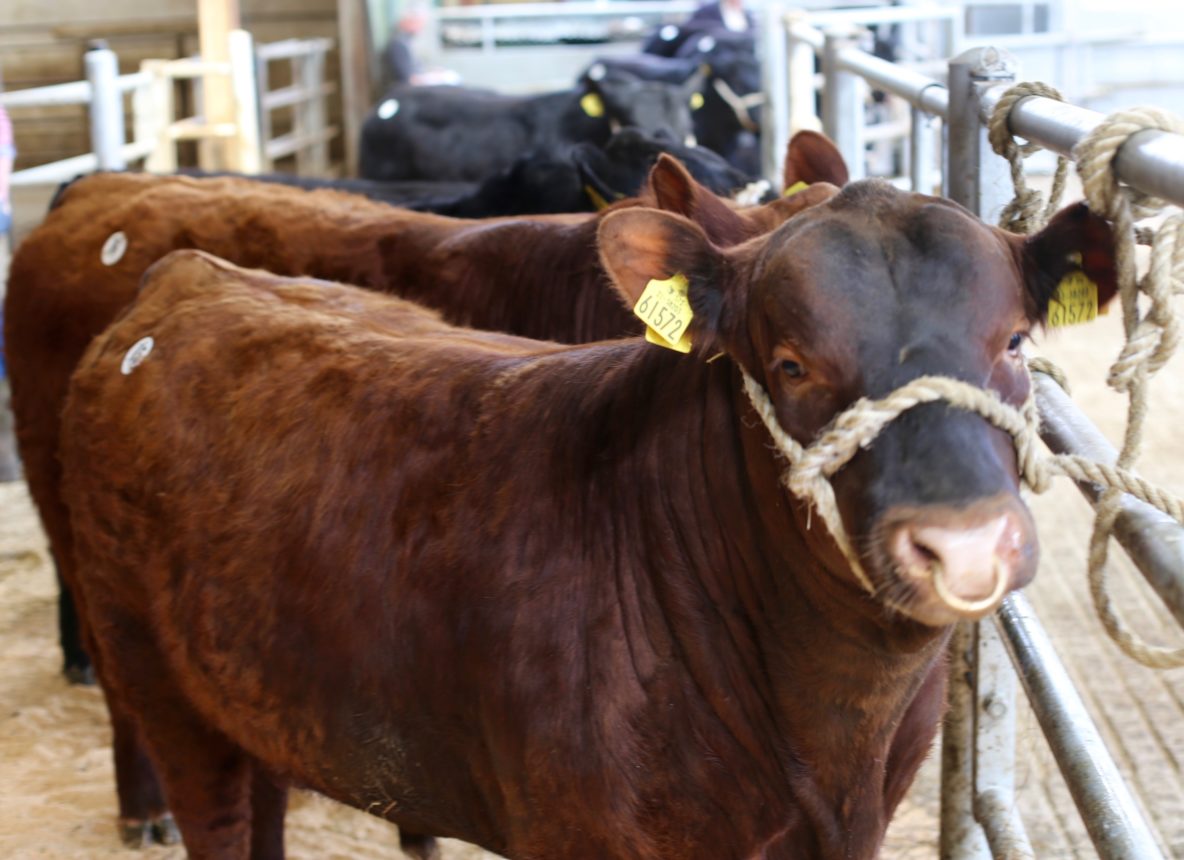 The annual production sale for the Lisduff Aberdeen-Angus herd of Leo McEnroe, Lisduff, Maghera, Virginia, Co Cavan took place at the Mid Tipp Mart, Thurles, Co Tipperary yesterday with 39 Aberdeen-Angus bulls catalogued for sale. This is the sixth consecutive trip to Thurles for Leo and his hard-working team of helpers and assistants with all bulls being accredited under the ICBF Whole Herd Performance Recording programme (WHPR) and sold under high herd health status on the day.

Overall, the yearling 2018 born bulls failed to attract any significant interest in the sales ring which led to a disappointing 45% clearance overall with bulls selling to an average price of €2650. These figures were well down on last year’s sale (€3200 average at a 60% clearance) but it is worth noting that the mature, 2017 born bulls sold very well in the ring with the red Aberdeen-Angus bulls attracting particular interest.

For the third year in succession, a red Aberdeen-Angus topped the Lisduff offering of bulls, this time in the form of the 17 month old, Lisduff Red Mist T572 who sold for €3500. This one is a son of the stock bull, Lanigan Red Krackerjack and boasted a five star terminal and five star replacement index along with a calving ease figure of just 0.9% and follows in the footsteps of the red Aberdeen-Angus bulls, Lisduff Red Pepper R368 and Lisduff Red Kevin S466 who topped the Lisduff production sales in 2017 & 2018 and sold for €8000 and €4500 respectively.

Hot on the heels of this year’s top priced bull was another red Aberdeen-Angus bull, Lisduff Red Master T571 who sold for €3400. This five star replacement index bull was also born in November 2017 and was out of Lisduff Red Missie N145 (a Flodden Red Beau Laddy K573 daughter) and was again sired by Lanigan Red Krackerjack.

The first Aberdeen-Angus bull into the sales ring yesterday, Lisduff Pioneer provided the third highest price of the day and sold for at €3100. This four star terminal index bull was the oldest bull on offer, at 26 months, and was sired by Bunlahy Kojak and out of Summerseat Emily P010 who goes back to Crerogue Ebbs L348, Aynho Rossiter Eric B125 and former All-Ireland Aberdeen-Angus champion, Blelack Elijah G747 on the dam’s side.

The double five star bull, Lisduff Batey T553 sold next best at €3000. This July 2017 born bull is a son of herd stock sire, Mogeely Josh M206 who himself is a son of the famed All-Ireland Aberdeen-Angus champion, Wedderlie Blackbox J935. This one carried a calving ease figure of 1.3% as well as a replacement suckler beef value of €121.

Also selling at €3000 was the 19 month old, Lisduff Elevator T569. This one is a son of homebred stock bull, Lisduff Delle P261 and is out of the recently purchased female, Trimblestown Eloisa R087 who goes back to Liss Bett Man B414 and Carrigroe Vincent D499.

The third of three Aberdeen-Angus bulls to trade at €3000 was Lisduff Dooley T584. This three star replacement index bull was born in December 2017 and is out of a Goulding Jim Dandy dam from the Danoty cow family at Lisduff. 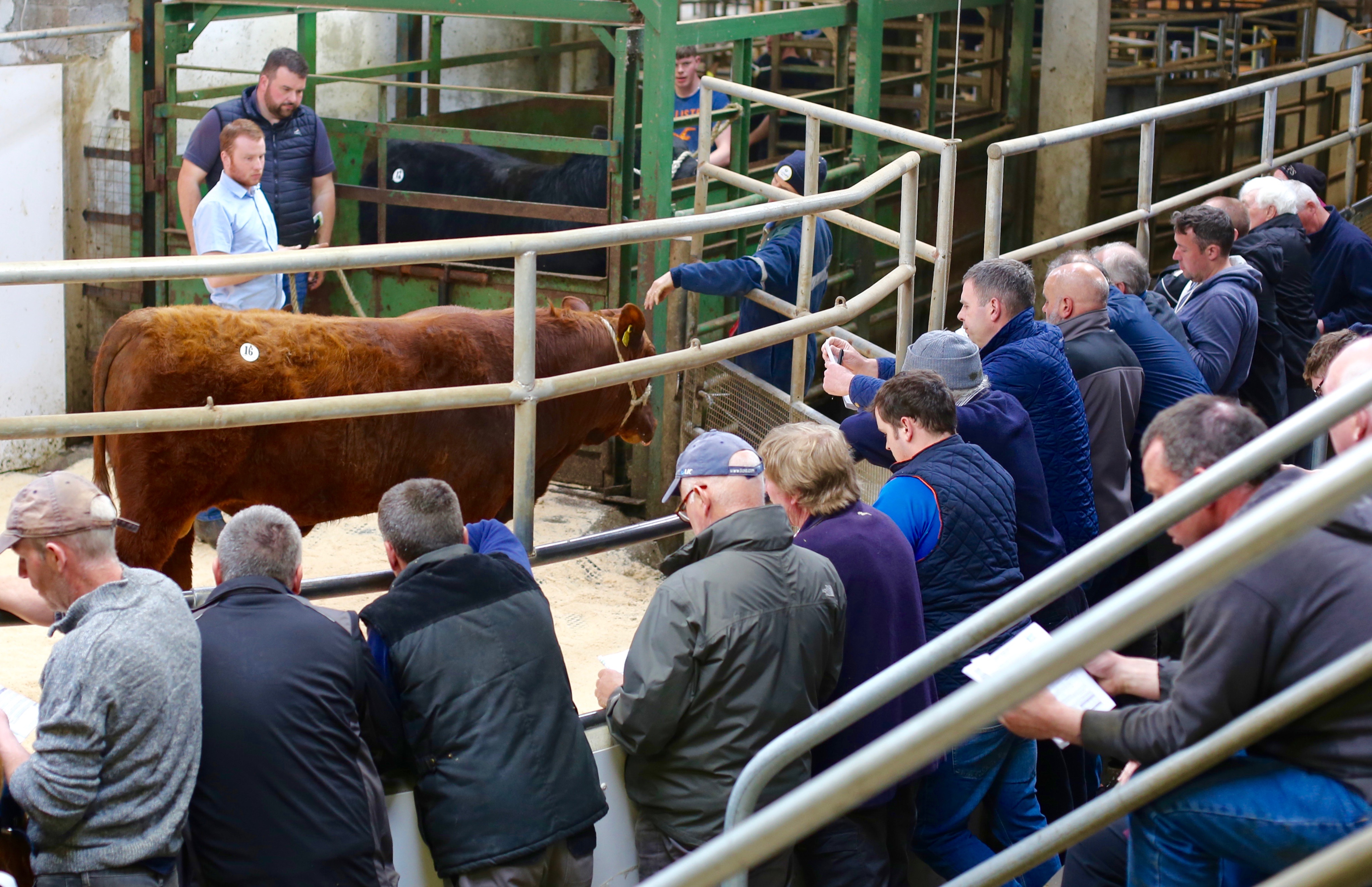