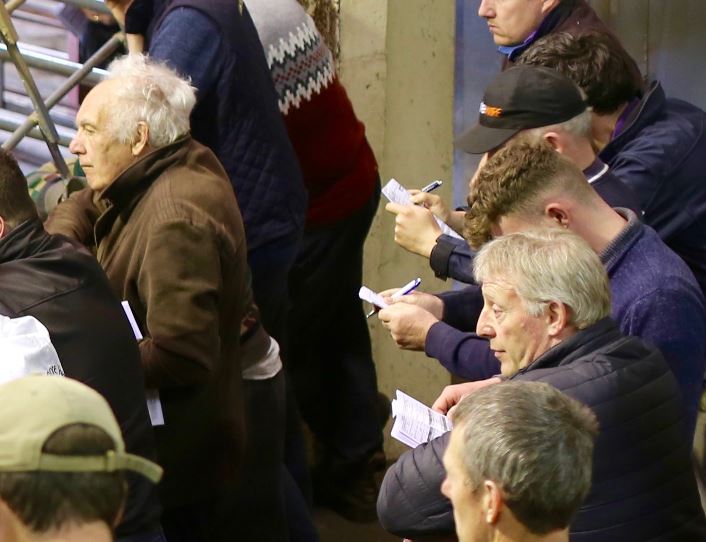 The 2019 Irish Aberdeen-Angus Association Premier Spring sale of pedigree Aberdeen-Angus bulls took place at Nenagh yesterday with over 40 exhibitor bred bulls catalogued for sale. 80% of the bulls forward were born in the Spring of 2018 and it was from this age group of bulls that master judge, Shane Healy of the Branner Aberdeen-Angus herd in West Cork found both his supreme champion and reserve champion. The sale went on to produce a 65% clearance overall (down slightly from a 75% clearance last year) with the majority of the bulls that sold on this occasion aged 12-15 months, with one bull not having even reached his 1st birthday. Whilst the young bulls attracted sustained interest in the sales ring, the average price dropped in line with the power, age and maturity of the bulls on offer to settle at just over €2200.

The sale leader came from Joe Kelly, Glostermin, Gorvagh, Co Leitrim who sold his November 2017 born bull, Glostermin Lord Harrison T021 for €2850. This 3rd prize winner was one of just three Autumn 2017 born bulls to trade on the day and is a son of the well known AI bull, Friarstown Ideal Pete K202 and goes back to Springblack Lady Hupitor A016 on the dam’s side.

The day’s supreme Aberdeen-Angus champion was awarded to the 13 month old, Coolnahinch John Eric U106 from James Hall, Coolnahinch, Keenagh, Co Longford. This five star replacement index bull sold for €2750 and is out of Edgeworthstown Eva N141, a Lios Breac Lord Bloom H059 daughter. This one held one of the lowest calving ease figures of the day at 1.1% (breed average: 2.06%) as well as a replacement index of €143. 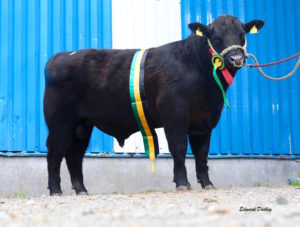 The reserve Aberdeen-Angus championship was won by the youngest bull in the entire sale, the 11 month old Glostermin Lord Herbie U022 from Joe Kelly, Glostermin, Gorvagh, Co Leitrim and sold for €2200. This young bull came from the same herd as the day’s sale topper and is out of a homebred cow that goes back to Goulding Jumbo King K436 and Aynho Rossiter Eric B126. 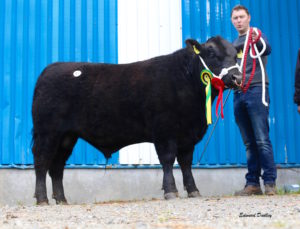 Another Spring 2018 born bull, Clooncorick Master U903 exhibited by John Richardson, Keenaghan, Ballyconnell, Co Cavan sold next for €2500. This one was a 3rd prize winner in the pre-sale show and was sired by Lismoy Lancelot who himself is a son of the famed multi All-Ireland Aberdeen-Angus champion, Rosemead Karona J957.

The 1st prize winner, Templequain Lord John U061, exhibited by Martin Costigan, Templequain, Errill, Portlaoise, Co Laois sold for €2350. This February 2018 born bull was a son of HF Rebel 53Y and came from the Lady Janice cow family at Templequain.

The 12 month old, 2nd prize winner, Creggane Pops U473 from James Boyce, Creggane, Charleville, Co Limerick sold for €2250. This bull had barely reached his 1st birthday and was another of the young, yearling bulls to sell on the day and carried a calving ease figure of 1.2%, which was much lower than the official breed average of 2.06%.

Also trading at €2250 was the 14 month old, Sheemore Plumtree U526 from Paddy Farrell, Ballinwing, Carrick-On-Shannon, Co Leitrim. This one also took a blue rosette in the pre-sale show and was out of the homebred cow, Sheemore Pretty Lady M373 with Blackeagle Challenger 19E, Netherton Figo C244 and Wandering Creek Challenger 5A in the back breeding. 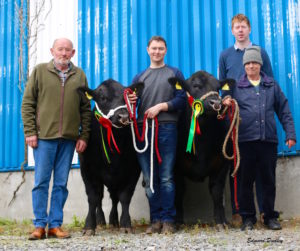