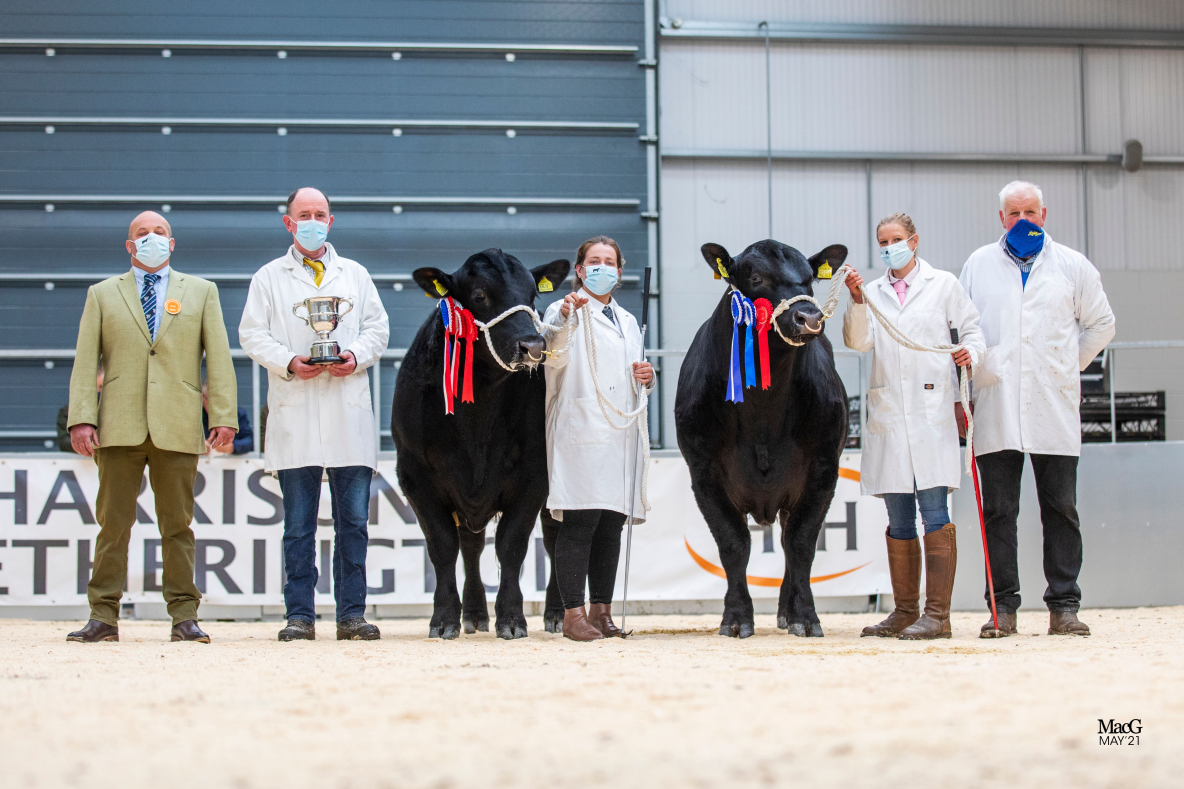 Overall Champion and Overall reserve champion with Judge Dallas Allen Auchincrieve Excalibur W553 and Lot 43 Rulesmains Kings Gold W321 which went on to be unsold in the sale and retained by the herd for breeding.

At an 85% clearance rate 52 Aberdeen Angus bulls found new homes at an average of 4164gns followed by a fine selection of very well-bred females that went to a top of 5800gns for a cow and calf unit from the Taylors of Crook hill to make an average of 3018gns for the 16 lots on offer with 100% clearance leaving no doubt that Aberdeen Angus Females are in demand.

The first show since the lockdown found our judge Dallas Allen dusting the cobwebs from his judging jacket and donning a “mask for his task “and the difficulty that is presented to all judges as Shows and Sales is, will the gavel follow his Judging? It did and four out of the first five leading bids were first prize winners in their classes and he had the champion and reserve champion as his first two. The top 14 leading lots were all bar one prize winners, so the buyers gave their assent to his judging capability, a big thank you and a huge well done to Dallas for taking on the job at short notice. 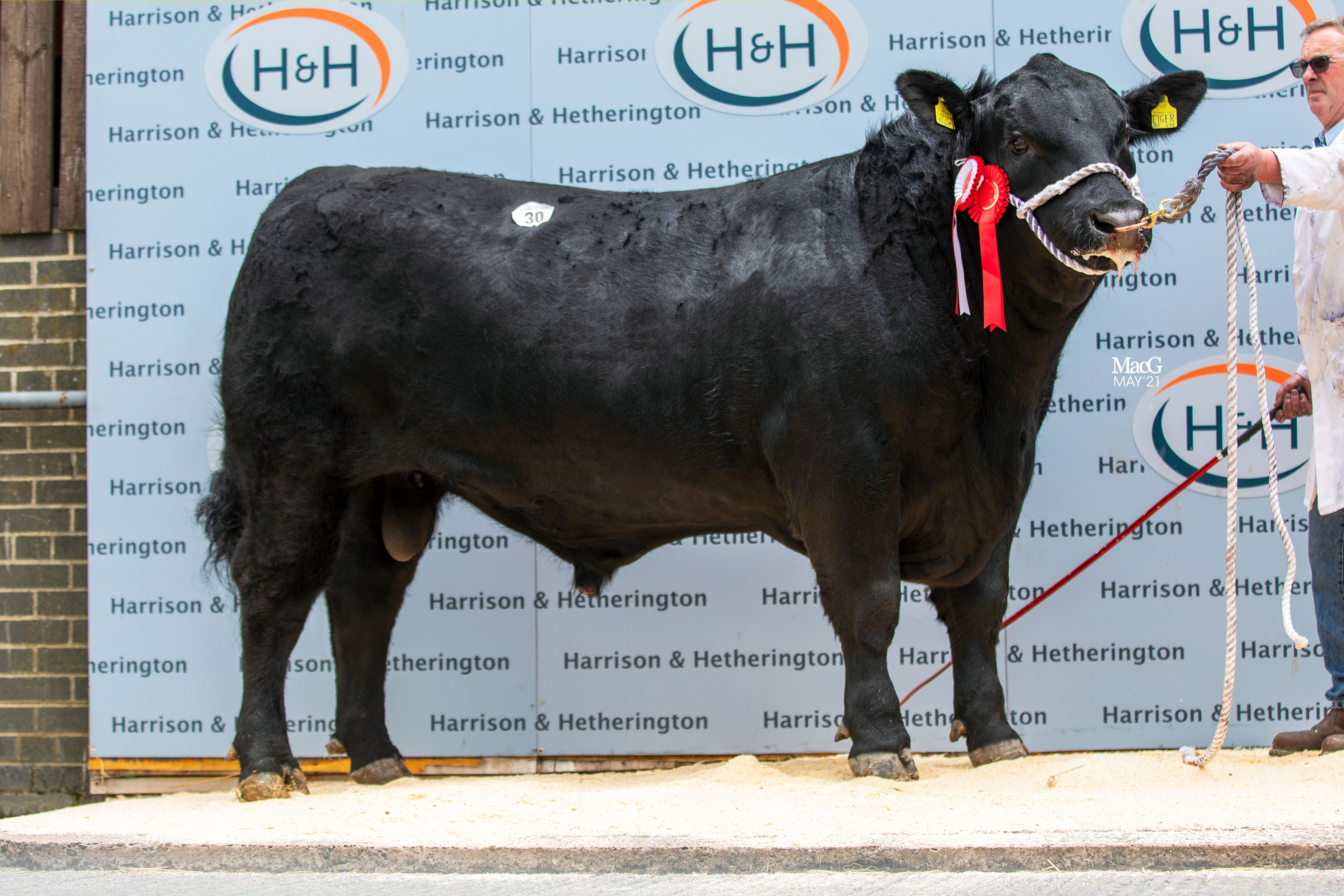 Lot number 52 From the Auchincrieve herd of Charles McCombie with Auchincrieve Excalibur W553 the Junior Champion and overall champion of the show and first in his class 6 realised 6500gns going under the hammer to Messrs Rutherford, Whitfield, Hexham, Northumberland. 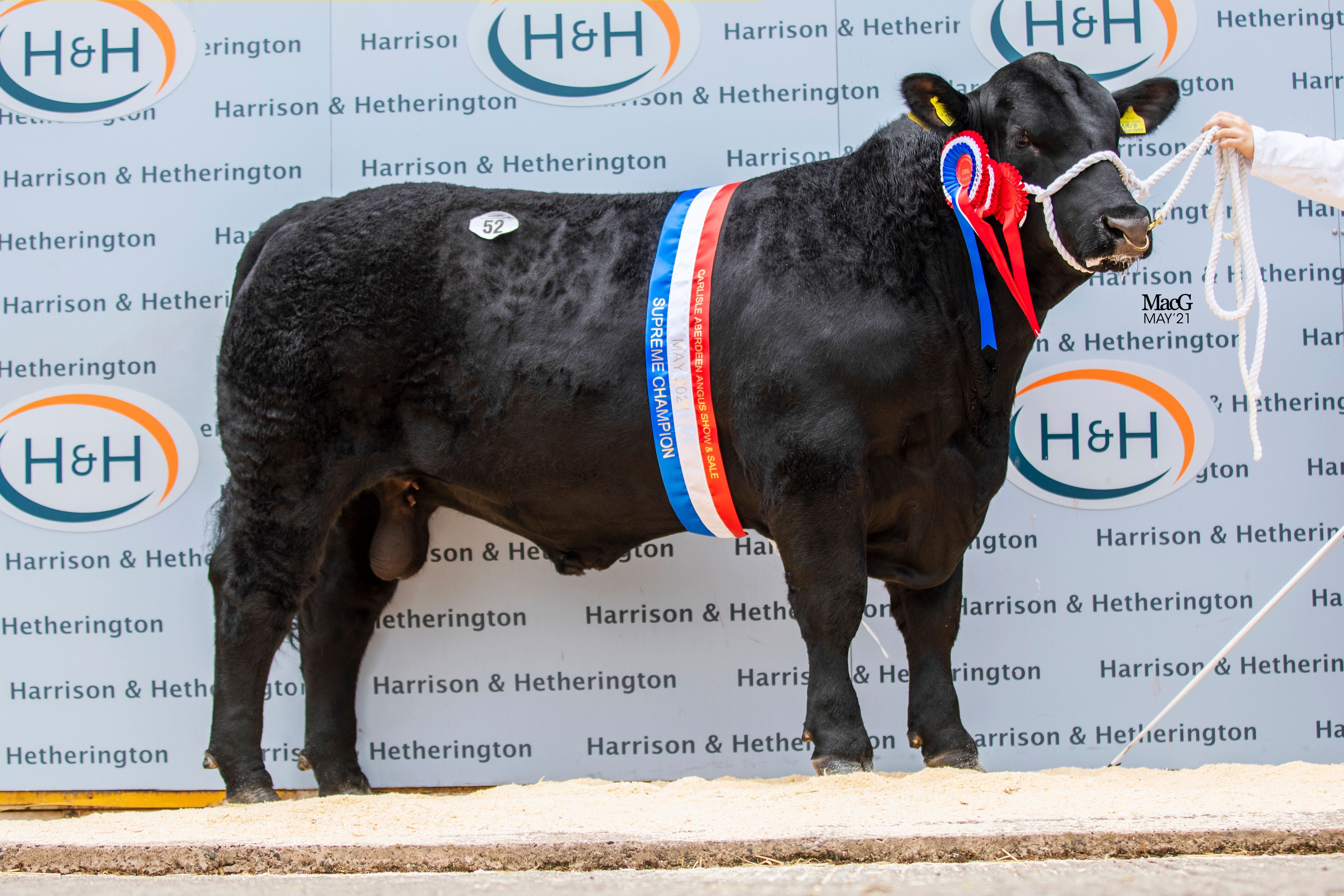 Lot number 22 from Mr Neil Wattie’s Tonley herd was next up changing hands at 6000gns Tonley Equaliser V662 changed hands and went back over the border to Messrs Mactier & Son, Mochrum, Newton Stewart, Wigtownshire. Equaliser was 3rd in class 3 in the show. 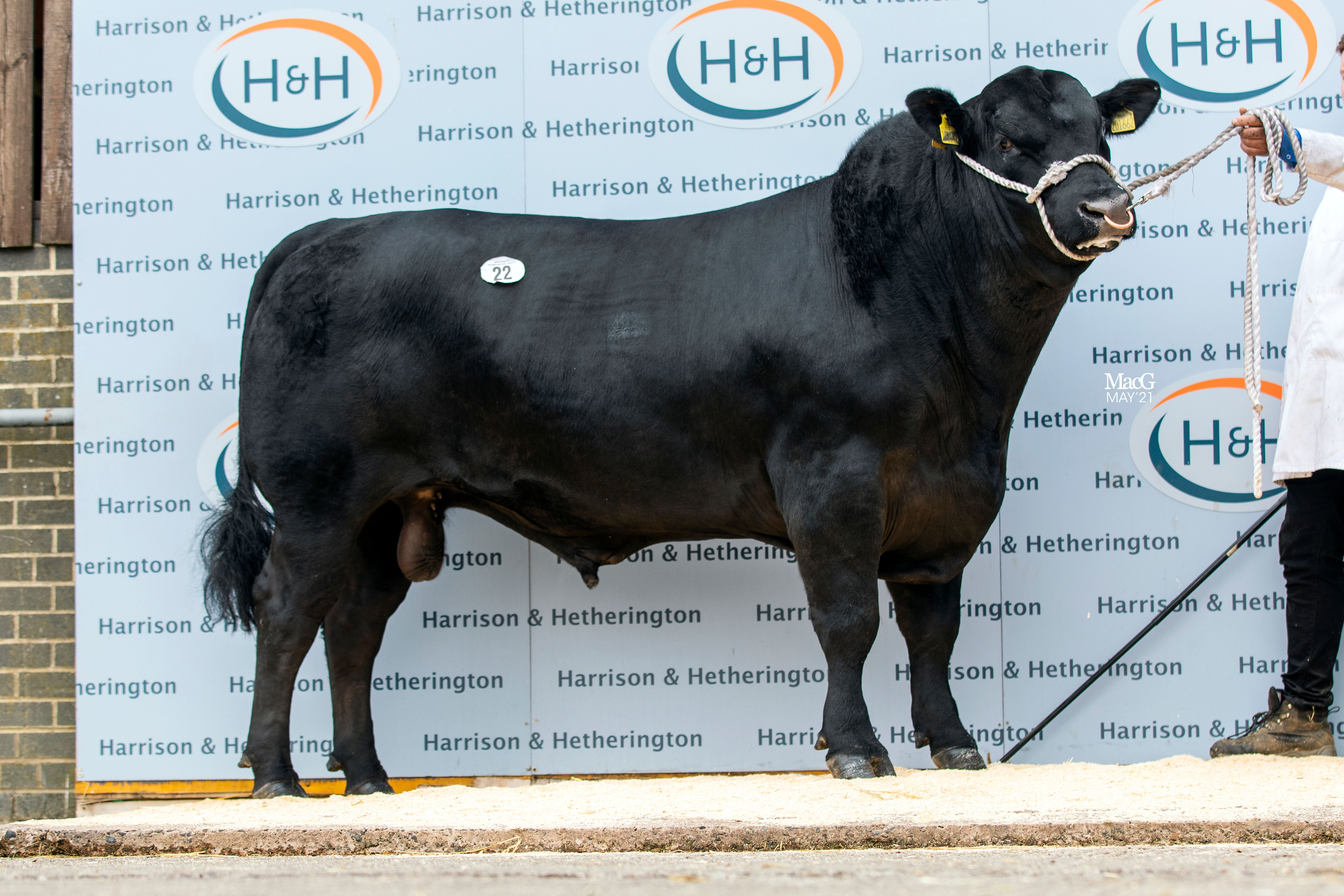 Lot number 58 was consigned by Martin McCornick and went down to Yorkshire to his new home with Adrian and Penny Johnston’s Yearsley herd at Brandsby near York, A second investment in a McCornick bull for them at 6000gns the bull took 1st place in Class 7 in the show. 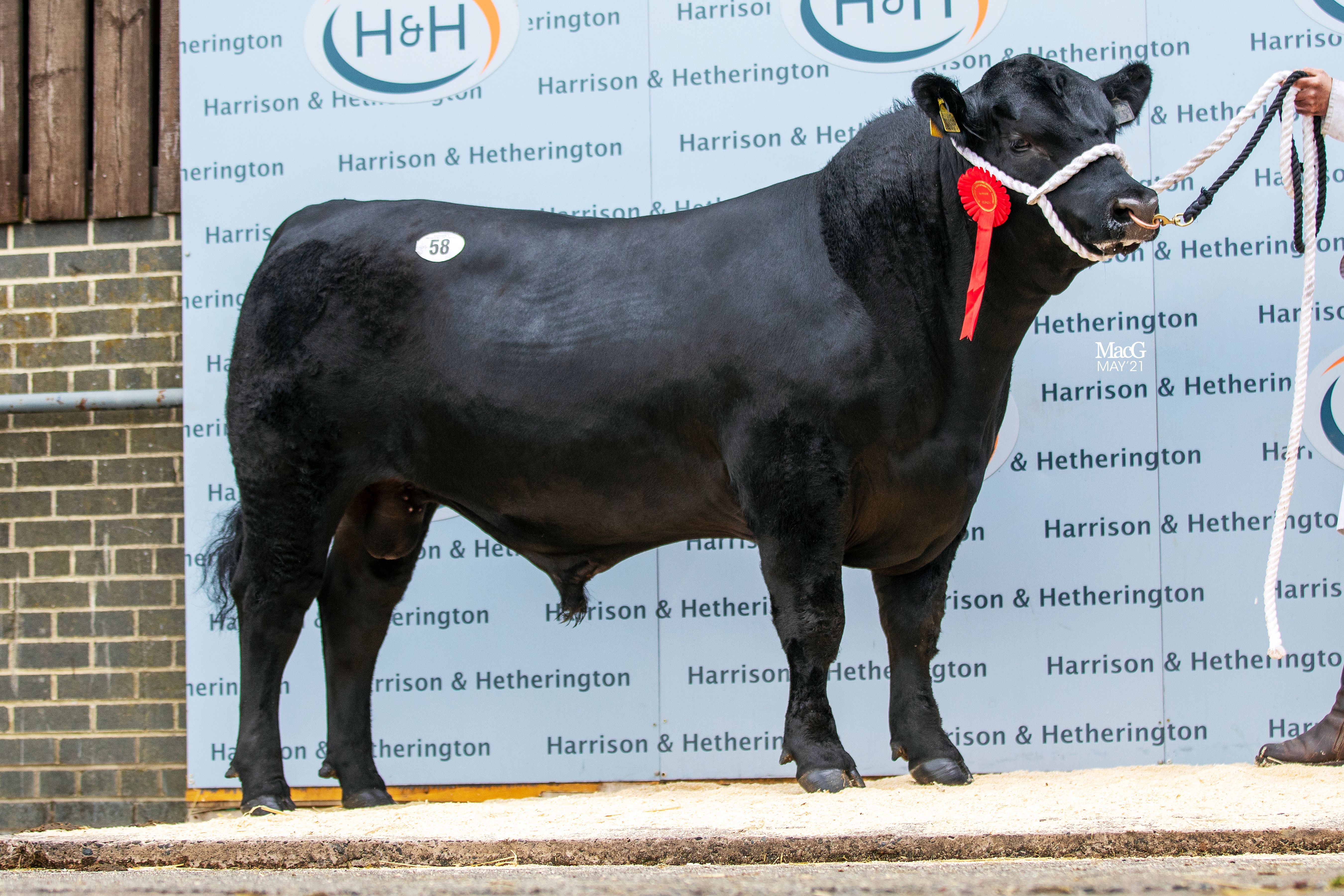 A Second of the string of bulls consigned by the Aberdeenshire Auchincrieve herd of C&E McCombie to make the topflight of prices on the day was lot 69 Auchincrieve-Elbow-W598 being placed first in his class in the show and realizing 5800gns in the sale and being the bull of choice for Messrs Bell, Kirkton, Hawick, Roxburghshire 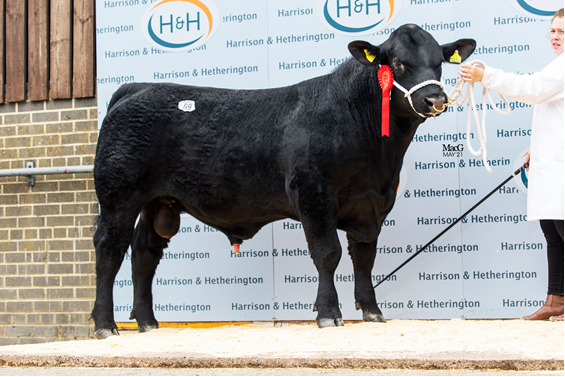 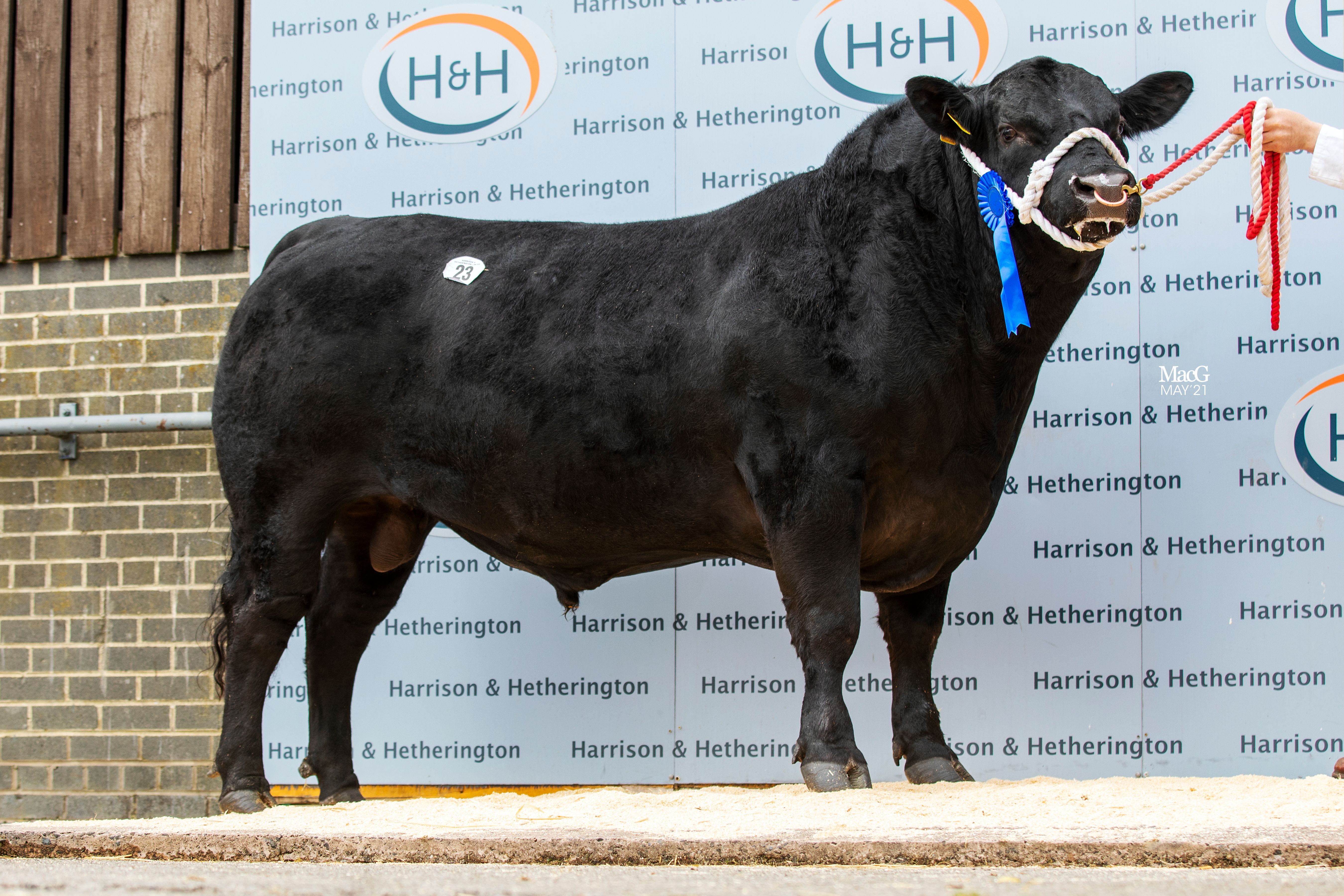 Lot number 51 was the pick of the bunch for JCB Farms Ltd, Farley, Oakamoor, Staffordshire where the brisk bidding carried on at 5200gns for Auchincrieve Egor W548, again from the string brought south by C&E Mc Combie finding willing bidders for his quality of animal. 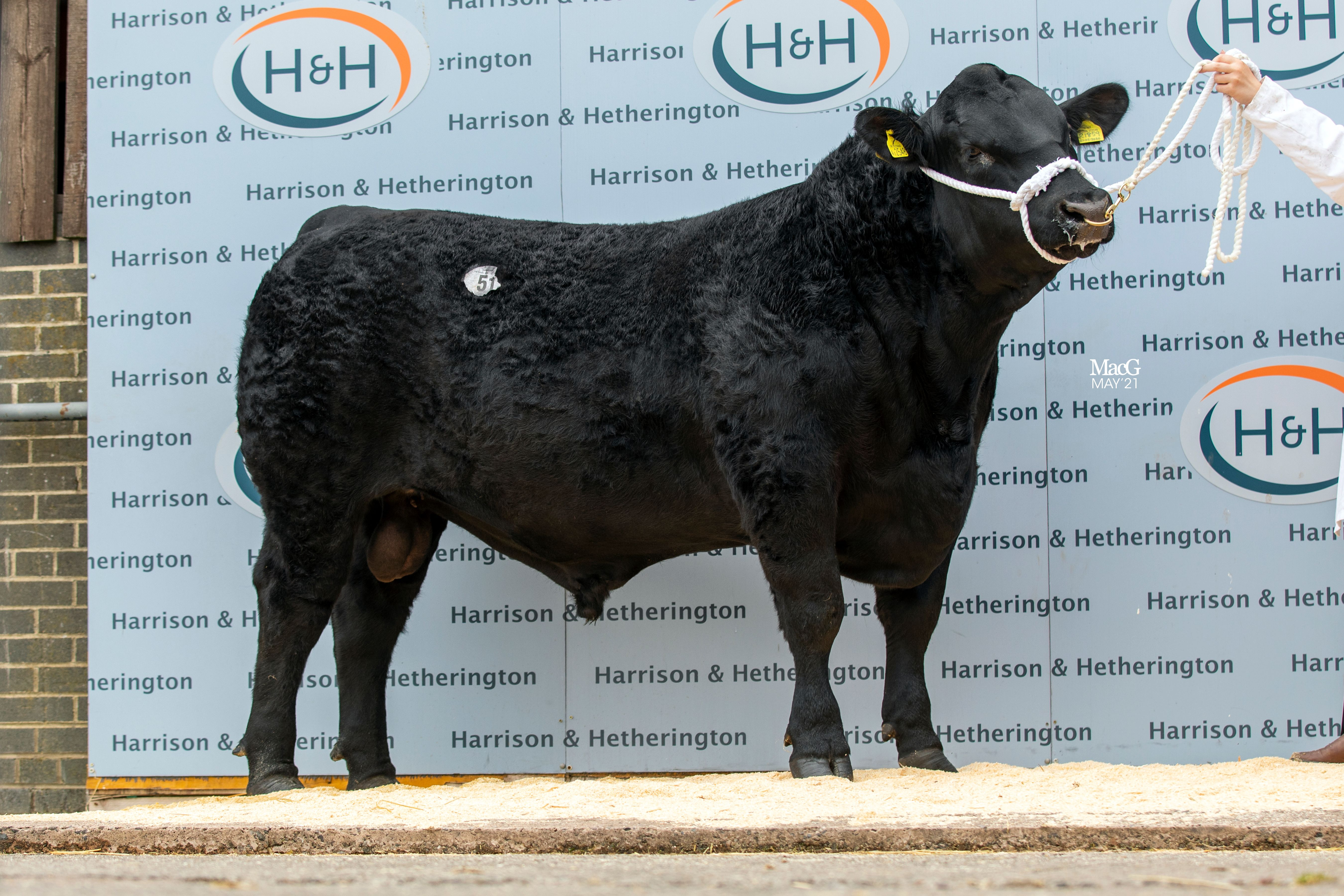 Lot 83 Crook-Hill-Dicky-Double-W041 went south to Wales at 5200gns to an undisclosed buyer continuing the metamorphosis of the Welsh who three years ago were not favouring Aberdeen Angus and certainly not reflecting the other home nations in its popularity are now finding how easily managed they are compared to the alternatives. Lot 83 was first prize winner in Class 9 and was the start of a very successful sale for the Taylors Crook Hill herd. 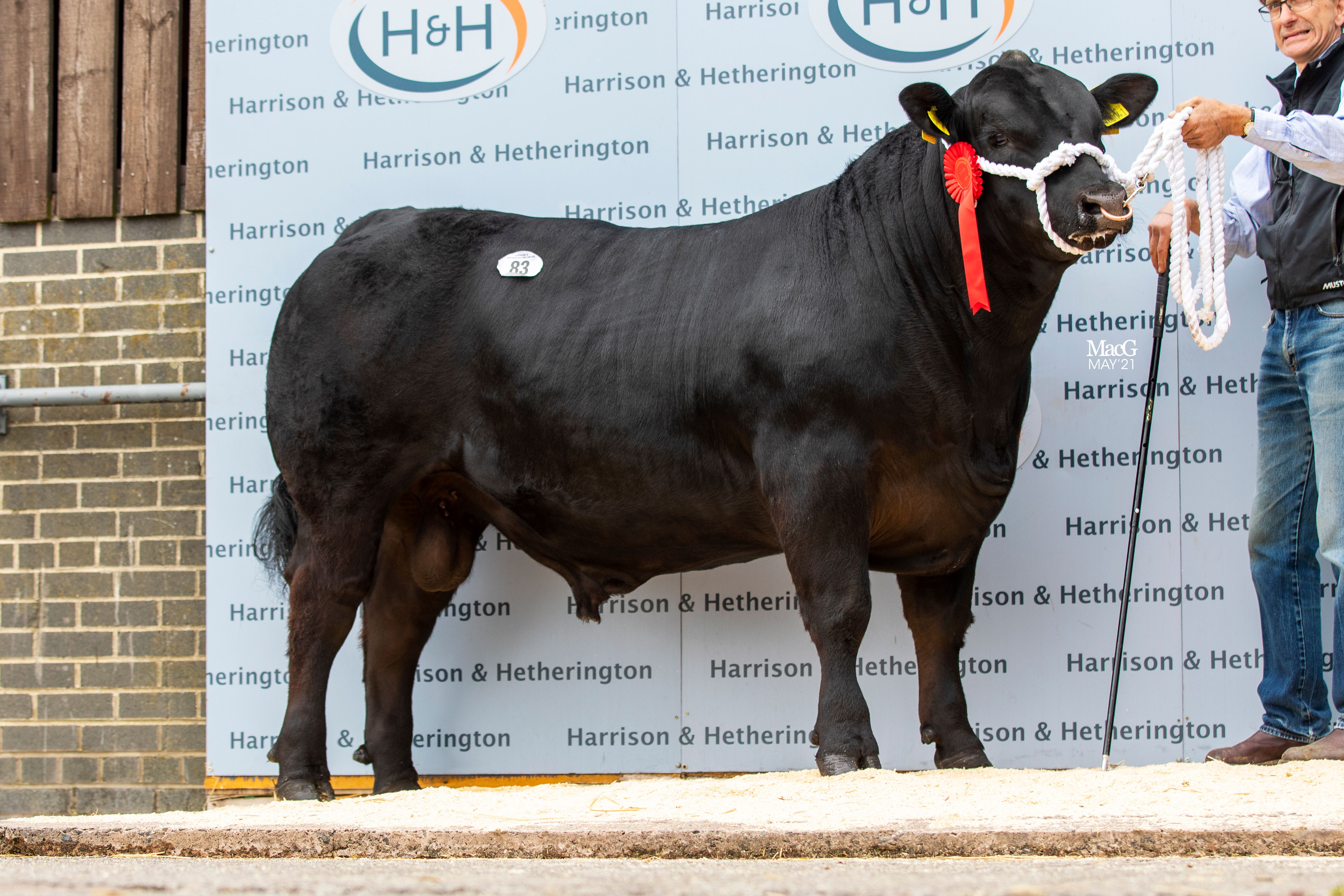 The Society wishes you all the best of luck with your purchases and thanks you all very much for your continued support of the best breed in the UK on a number of fronts.

There being no show for the females it was down to the gavel to decide what the bidders thought of the quality on offer and it got off to a flying start with a consignment from Dr William and Mrs Margaret Taylor, lot no 87 Liley Bella L103 an ET daughter of SAV Nett Worth 4200 and Prairielane 297E Band 3110 selling with her bull calf at foot which was a strong calf Crook Hill Benedict,  by Rawburn Makka Pakka setting the trend at 5800gns

A 2020 maiden Heifer lot 98 from Martin R McCornick was next up McCornick Duchess W677 a daughter of Skaill Dino P099 and home bred Mc Cornick Duchess N970 a heifer with a considerable show pedigree found appeal with the buyers and eventually going under the hammer for 3600gns and new owners Messrs Burgess, New Abbey , Dumfries, Scotland.

Hard on its heels at lot 97 another daughter of Skaill Dino and the McCormick’s Duchess line with Duchess S264 being the dam of this heifer. brisk bidding took this heifer born in 2020 to 3500gns and heading for Messrs Halhead , Hillam, Lancaster.

Recognition of the McCornicks breeding carried on with a  lot 104 McCornicks Evening Star W673 sired by McCornicks Kerry’s Boy S215 and its dam McCorncks Evening Star T405 this fully home bred heifer was run on and eventually sold for 3200gns to go across the Irish Sea to Messrs Murphy, Banteer, County Cork, Republic of Ireland where this heifer will again become a resident of the EU!

Last on the role of honour of leading female prices was again from the stable of Maiden Heifers from the Mc Cornicks, McCornick Nelita W697  came through the ring and reached a 3100gn price tag. Again home bred sired by  McCornick Evade R168 and its dam being McCornick Nelita P026 this heifer was part of the very smart looking draft and was purchased by Messrs Picken from Kirkcudbright in Dumfries and Galloway.

The Society wishes to acknowledge the vendors who consigned stock to the sale under the auspices of the organisation and hope that by our support that you continue to consign stock to the sales and giving us the opportunity to showcase the breed to the rest of the industry.