Following the very different circumstances of last year’s May sale at Stirling owing to Covid 18 restrictions governing the sale format in 2020 the Aberdeen Angus breed saw a buoyant trade in 2021 with quality bulls forward being in demand. With a top price of 7200gns, an overall average of 5245gns an increase over last year of 299.50gns accompanied by an 81% clearance. A strong trade across the age ranged helped with the figures and demonstrates the continuation of the strengthening in the marketplace at both sides of the farm gate, on pedigree and commercial beef farms of the Aberdeen Angus breed and Brand.

Top of the shop at 7200gns, lot number 234 was Cardona Jewel Eric V105 from the herd of Robbie Galloway’ sired by Rawburn Boss M554 out of Cardona Jeweliot Erica S002 going to its new home at W Mitchell and Sons, Hazelside, Douglas. 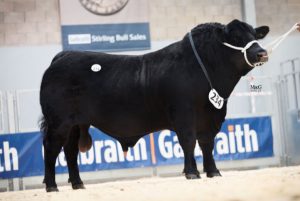 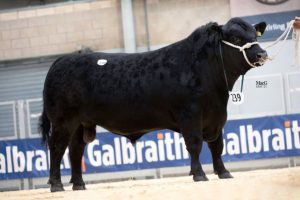 The Tonley herd of Neil A Wattie took home 6500gns for their home bred entry lot number 247, Tonley Pokemon V657 sired by Tonley Pato N938 out of Tonley Princess N970, taking a long trip to his new home with Messrs Thomas from Powys in Wales 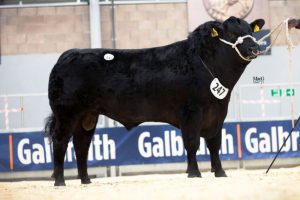 Two further lots at 5500gns lot 255 from Messrs R&C Rettie with Retties Rocky V077 going up to the Scottish Bull Stud at Knocknagael and lot number 258 from Mrs June Barclays Hareston herd with Hareston Elijah V294 finding favour and a new home with, R Inglis and Son from Aberdour in Fife.

John Steels Westdrums herd consigned lot number 257, Westdrums Everest V202 realising its summit and a winning bid of 5200gns from GT and S Coghill and heads across the short but precious water to Orkney. 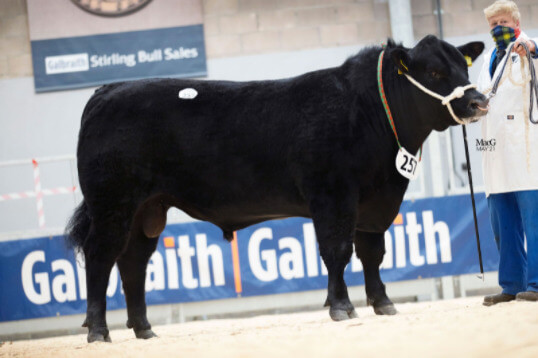 Two lots realised 5000gns one from the Wattie’s Tonley string, Tonley Alfie V671 lot number 250 heading to pastures new in the South West of Scotland with Messrs Smith from Dalry near Ayr placing the winning bid. And one from the herd of Donald Rankin Esq, Kilmaluig Leonardo V278 which lot number 259 is heading to Messrs Semple at Campbelltown.

A further 11 lots realised prices from 3800 to 4500gns, the Society thanks all consignees for their support of the May sale.

And we also wish all the buyers every success of their purchases and for their confidence placed with their investment in the future of their businesses by choosing Aberdeen Angus, the Breed and Brand for both now and in the years to come.