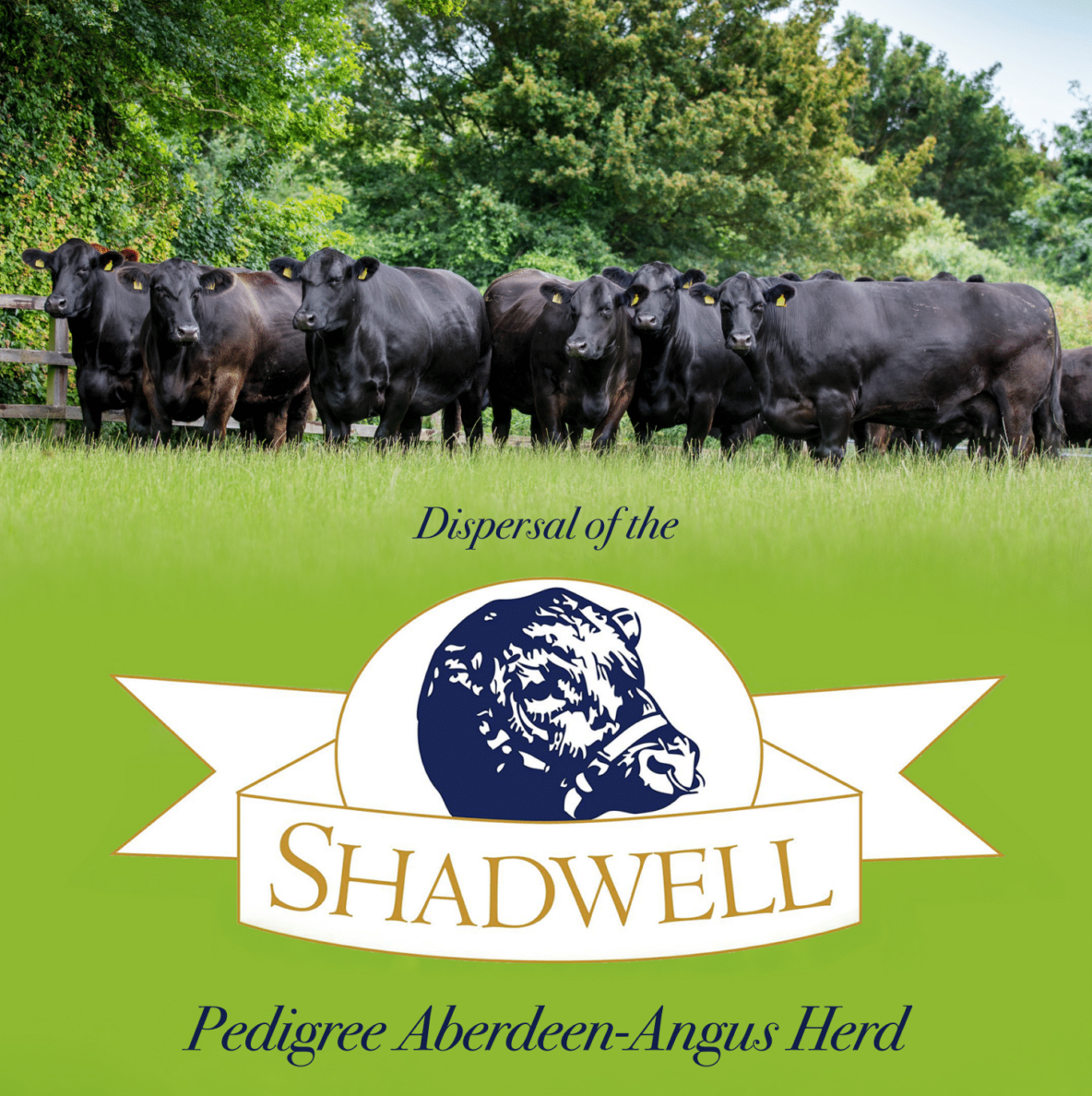 Tremendous trade for 153 cattle all sold to a combined total of £653,730, with a top of 28,000gns for a cow and calf outfit and a standalone high of 22,000gns for a maiden heifer, with record breed averages recorded for both in-calf and maiden heifers, were just some of the multiple highlights at a dispersal sale of the entire multi award-winning pedigree Shadwell Aberdeen-Angus herd in Thetford, Norfolk.

The sale comprised predominantly females – proven breeding cows, in-calf and yearling heifers – from one of the country’s most prominent herds on the show circuit, having bred multiple national and interbreed champions at the UK’s major shows since the herd was first established in 1997. Many cattle by top-notch Shadwell sires were included in the sale, along with embryos.

A packed ringside was complemented by a live online and telephone bidding facility, with multiple buyers recorded from the length and breadth of the UK and across into Ireland. 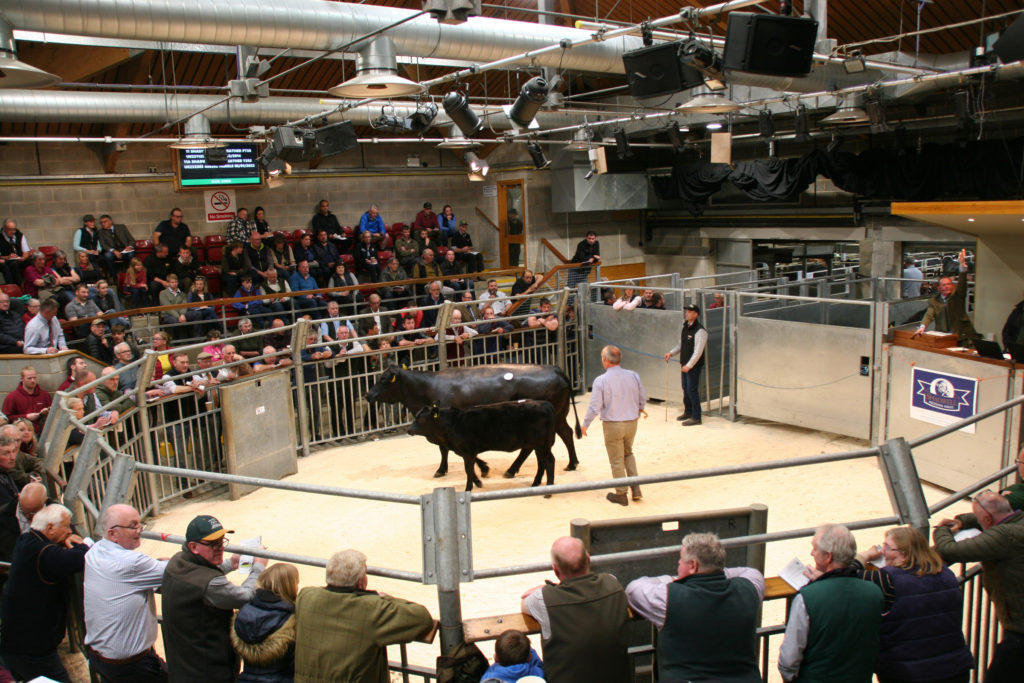 Already a mother of seven and described as a cow with huge capacity and a tremendous udder, she sold with her latest female calf at foot, the January, 2022, Lady Heather Y292, by the much-acclaimed Shadwell Evolution T003, a sadly missed sire whose progeny had such a major impact on the sale. He had won many championships around the country, including the 2019 Summer National, while his own dam, Evora M618, was Summer National champion in 2014.

Having been run since mid-April with Stouphill Master Prince, a bull purchased at Stirling this February as a back up to Evolution, and himself the last lot to be sold in the dispersal, the top performing outfit on price joined JM Steele in Duns on the Scottish Borders,

Lady Heather P738 herself made her mark when two of her daughters also went under the hammer at exceptional selling prices. First up and making 11,000gns was Lady Heather W176, a January, 2020, daughter of Haymount War Smith R578. Scanned in-calf to Evolution, she joined online bidder Joe O’Mahoney, in Kilpatrick, County Westmeath, Ireland, who was a prolific buyer with 21 successful purchases for Tillingdale ULC, home of the Gigginstown herd of A-A cattle, which he manages.

However, it was the second daughter, the year younger Lady Heather X250, a top-notch maiden heifer and solid cow in the making by the prolific Evolution, who really caught the eye when making the day’s top call for a standalone entry of 22,000gns when going to Michael and Melanie Alford, Foxhill Farm, Devon. 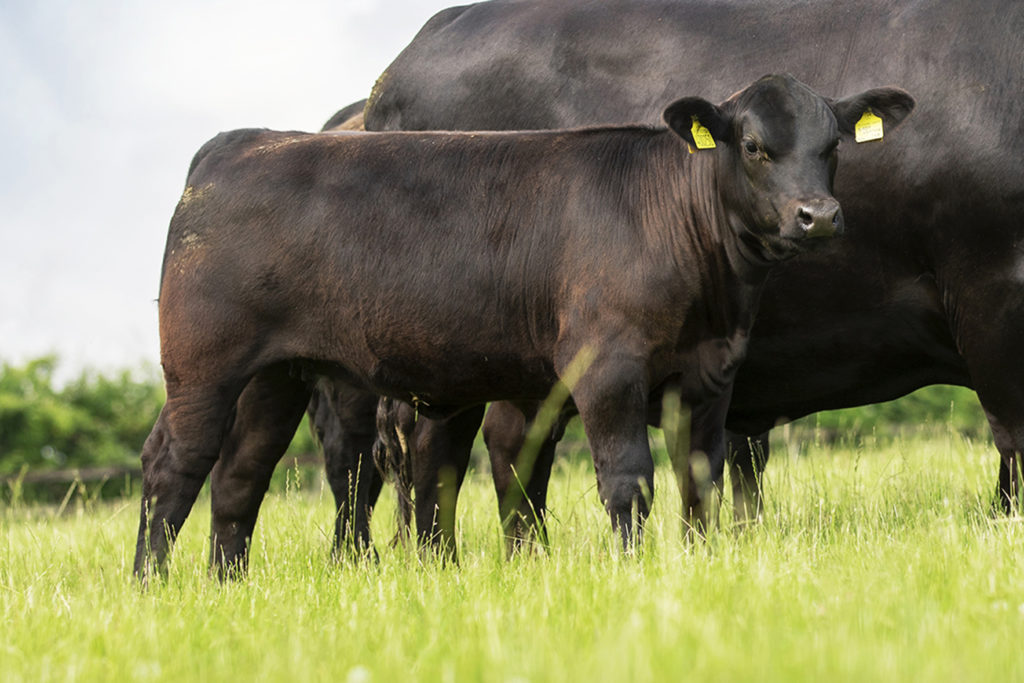 From another renowned female line and consistent family, Shadwell Blackbird R797, soared to 10,000gns. The 2015-born mother of five is one of the few daughters in the herd by the £40,000 Rawburn Black Hawk L261 (by Lockerley Legolas), out of a home-bred Peter Pershore dam. Scanned in-calf to Evolution, she travelled north of the border to Forfar with A&J Adam.

Her bull calf son, Shadwell Black Magic X281, by Evolution and one of the picks from the 2021 autumn calf crop, was also offered for sale separately, doing better than his prolific dam when sold for 14,000gns to another Scottish buyer, Aberdeenshire’s NA Wattie, the outfit together netting 24,000gns.

Another mother and son outfit, this time from the Evora family, were sold separately, jointly making 20,000gns. The dam, Evora UO55, a four-year-old daughter of Rawburn Fast Ball P844, is out of Evora J443 (by Muirhall Total Deal). Described as the pick of the herd by manager Robert Clarke, her maternal sister, Evora M618, was 2014 National Show Champion 2014, while a maternal brother, Shadwell Excalibur L522, was Stirling Champion in 2013.

The mother of two, scanned in-calf to Evolution, fell to a 15,000gns bid from the Isherwood family’s local Airedale pedigree Angus herd in Kildwick, while her second calf, an October, 2021, bull, Shadwell Earthquake X288, another well-bred Evolution son, made 5,000gns when going to W&R Dunlop in Lanarkshire.

Outfits from the Blue Belle line were also in ready demand. Hitting 9,000gns was the October, 2016, Idvies Eland daughter, S934, bred out of a Peter Pershore dam. In-calf to Evolution, she joined Porter Farms in Lisburn, Northern Ireland., being accompanied into the sale ring by her October, 2021, son, Shadwell Bravado, again by Evolution, who sold separately for 8,000gns, again going to Ireland with M Irwin, of Omagh, Co Tyrone, the duo jointly netting 17,000gns.

A member of the Shadwell show team, Pam T941, female champion at the Great Yorkshire Show as a yearling heifer in 2018 who, at five-years-old,  has grown into a lovely cow and appears primed for the 2022 shown circuit, was also keenly contested at the ringside.

By Idvies Eland, himself by Shadwell Black Broughton K465, a bull purchased from the herd for a record five-figure price, who at seven years of age stood overall Interbreed Champion at the 2015 Royal Highland Show and was Scottish Farmers’ ‘Angus Champion of the Decade,’ Pam’s own dam, M601, is another daughter of Peter Pershore. Sold with her third calf at foot, the January-born Evolution son, Shadwell Power House, and since run with Stouphill Master Prince, the outfit commanded five figures at 14,000gns when joining Messrs Mawer and Benge in, Woodhall Spa, Lincolnshire. 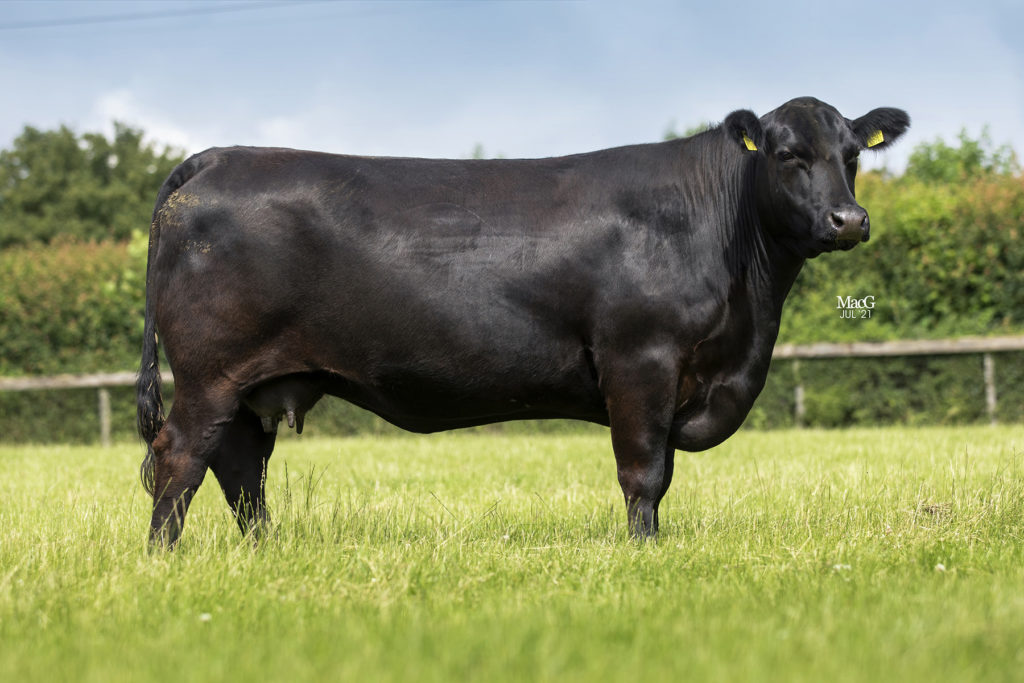 Another Blue Belle mother and daughter outfit, sold separately, but also jointly commanding 14,000gns were the four-year-old U039, by Weeton Diamond Mine P444, the record price 14,000gns calf at the Weeton dispersal sale, out of a Nightingale El Paso PAS0-sired dam, In-calf to Evolution, she made 7,500gns when going to AJ&M Taylor, of Blackburn.

Her September, 2021 calf, X280, by Carruthers Grenadier R797, acquired in 2020 after standing male champion at the Royal Highland Show the previous year, whose first son sold for £14,000, was knocked down for 6,500gns to Calderdale’s Andrew Hughes in Halifax. Other Shadwell cow and calf outfits regularly made up to 10,000gns.

Two-year-old Shadwell heifers, many with exciting pregnancies, were also extremely popular, all making four figures, with several hitting five-figure prices among them a brace at 15,000gns from the Evora line, the most successful in the herd.

First up at this price was Evora W173, by Haymount War Smith R578, bred out of a Peter Pershore dam and a maternal sister to Evolution. Scanned in calf to Carrington Park Time On B7, she also became a Joe O’Mahoney acquisition. Then came the 15,000gns Evora W211, by Idvies Eric, out of a Shadwell Ebenezer dam. In-calf to Rawburn Transformer, she also fell to Porter Farms.

Another Evora, W190, again by Idvies Eric, out of a Black Hawk daughter, made 12,000gns, while another at the same price was the Evolution daughter, Lady Heather W237, bred out of a Rawburn Rommel E423-sired cow, both again going to Mr O’Mahoney.

Back with the maiden heifers, the yearlings were described as probably the herd’s most uniform group, with another from the Blue Belle line, the March, 2021, X267, arguably the best Evolution daughter, bred out of a Nightingale El Paso dam, hitting 18,000gns when sold to Glympton Farms in Woodstock, Oxfordshire.

Also doing well at 13,000gns was yet another Evora, this time the January, 2021, X251, by Carruthers Grenadier, out of a Muirhall Total Teal E009-sired dam. The buyers were PC Stovvold & Son, in Godalming, Surrey.

The final lot into the sale ring was the highly regarded young stock bull, the September, 2020, Stouphill Master Prince W346, who had run with many of the females. Bred by William D Allen, the son of Logie Defiance T774, out of a Stouphill Double Top NO62-bred dam, sold for 7,000gns when again travelling across the Irish Sea to join Mr O’Mahoney. 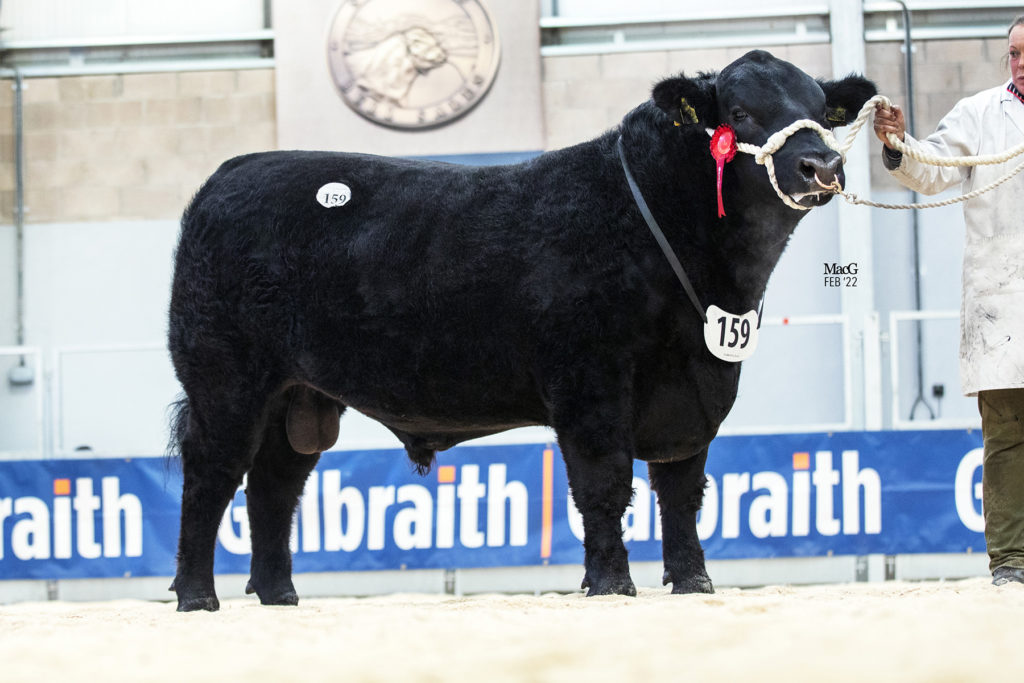 In addition, a total of 43 Shadwell embryos grossed £15,330 in total, averaging £356. The sale was conducted by United Auction Raymond Kennedy.

Herd manager Robert Clarke said afterwards: “It was a sad day for myself and my family, including daughters Maddie and Isobel, and I can only thank them for their hard work over the past ten months. We had been with the Shadwell herd for the last 12 years with much success along the way, but I couldn’t have asked for a better sale.

“I thought the herd was heading in the right direction with the young females we had coming through and was so pleased that the prices reflected this. It’s never a one-man effort and I can’t thank everyone enough for their help with the sale.

“Thanks must go Macgregors Photography and Margaret at United Auctions for putting together the catalogue and to Andrew Adam and Andrew Hughes for their help at home, and Richard Rettie and his team at the sale.

“The staff at CCM were absolutely faultless with their help and support and the venue at Skipton was superb. Special thanks to Raymond Kennedy not just for his skills at selling, but for his support leading up to the sale. I wish all buyers the best of luck with their purchases and hope they enjoy them as much as myself and my family did.”