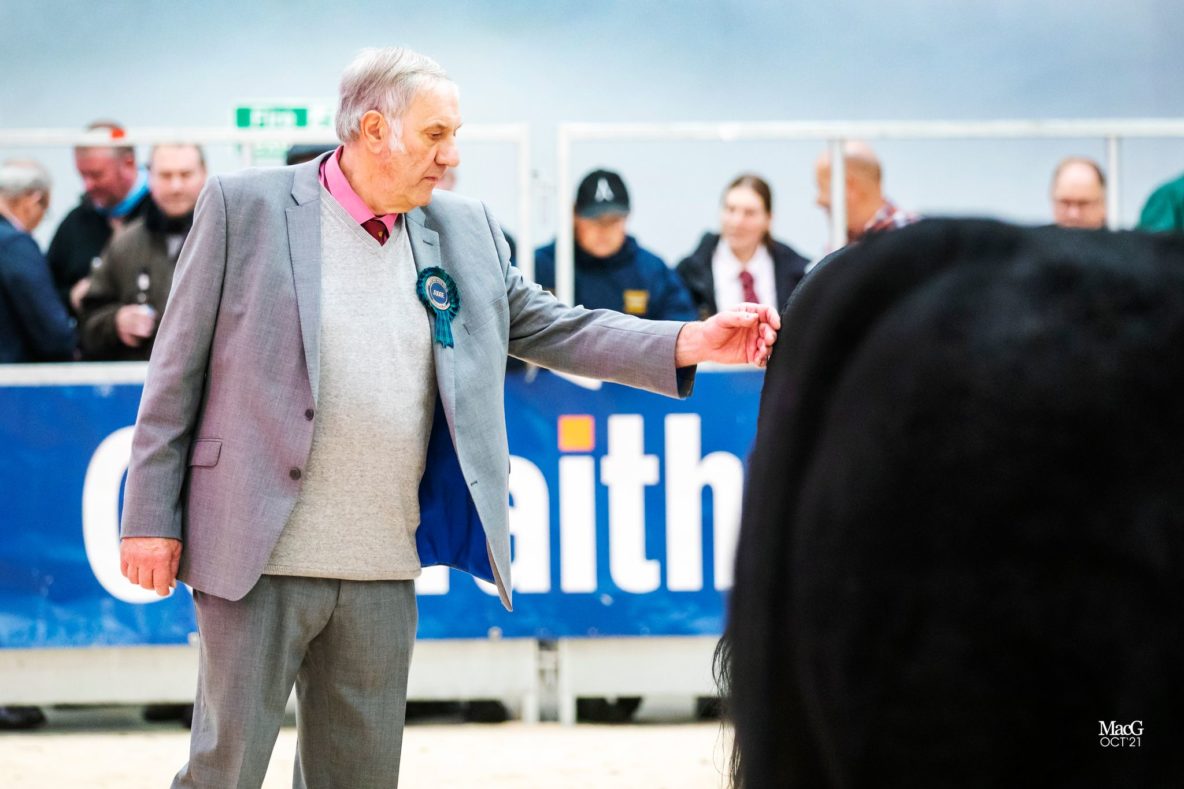 Blelack shine through on all fronts

Stirling October sale 2021 was what can only be termed as a very special event in the history of the breed where the full and final dispersal sale of Neil and Graeme Massie’s high profile Blelack Herd took place.

50 years of dedication to developing the reputation for their stock and being at the forefront of the breed locally, nationally and internationally throughout the Aberdeen Angus herd books of us and our sister Associations and Societies around the world.

In his career, Neil Massie has reached the very top, winning the Sir William Young Award for outstanding service to the livestock industry; a two-time president of the Aberdeen-Angus Cattle Society and a recipient of the President’s Award. Neil has judged around the world and has been honoured with an OBE, fitting rewards for the commitment that he has shown to cattle breeding and a true inspiration to cattlemen everywhere.

Through the 80’s and 90’s Neil scoured North America for sires to make Blelack the most successful herd in the breed’s history at the UK’s premier Perth and Stirling bull sales. The roll of honour from the shows and sales would suggest he achieved his aims.

The Blelack prefix is ingrained in every show and sale catalogue for the past three decades producing champions – and more importantly, pounds – not only for the Massie Family, but for breeders throughout the UK and Ireland.

It was fantastic to see things nearly back to normal at the sales with so many people seeing each other many for the first time in 18 months and it certainly made the occasion a special one in itself with the chance to interact with each other face to face over the weekend.

Highly experience breeder and Judge David Murray from the Wolflaw herd, based in Forfar took to the ring as the Societies nominated judge to put the cattle and exhibitors through their paces and is seen below receiving the customary rose bowl to mark the occasion buy the Chief Executive Barrie Turner. 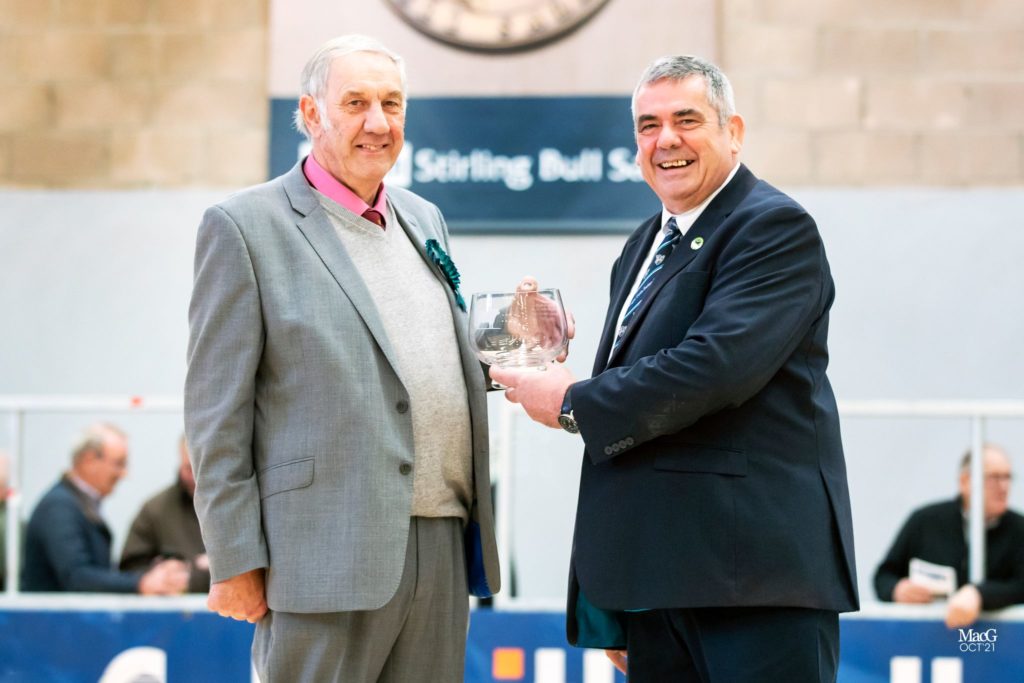 The Blelack trend continued right until the end when in the Show prior to the sale of Bulls the family took both Champion and reserve champion and the coveted Guerrero cup and the Gloagburn cup respectively with, Champion lot number 53 heading to the well-recognised Idvies herd of Alistair and Graeme Fraser at Forfar for a princely sum of 24,000 gns and the reserve lot number 58 heading for his new home in Lanarkshire to D Strachan and Sons East Shawtonhill Farm at 11,000 gns. 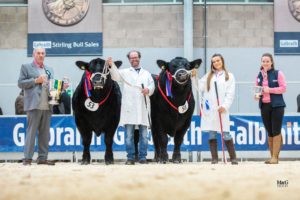 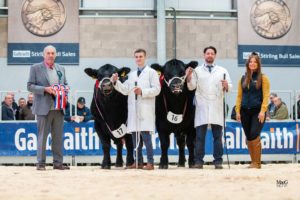 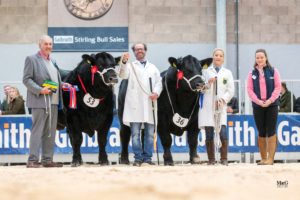 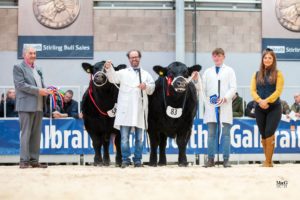 The inevitable outcome of the group of three bulls going again to the Massie Camp. 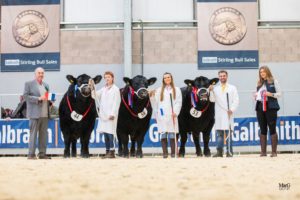 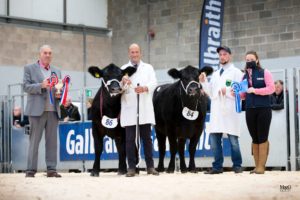 The group of three was an “overseas” entry coming from the Herd of Graeme Sprowl, Eastlands Farm Rothsay for his team of three females.

Interestingly, in a sale fixture usually dominated by bulls there are always some consignments of heifers, and the led heifers were judged with a pair of Red heifers from G&N Taylor, Mosshall included in the line up being shown at Stirling for the very first time with the following outcome.

The mega Aberdeen Angus Bull sale weekend was brough to a conclusion on Monday when the success of the previous two days really starts to count as cash starts to change hands. A packed ringside and good quality cattle forward was the recipe for the sale ring for the bulls. The day ended with 42 sold, a 68% clearance rate to average 6413 gns; up on last year’s average by 1362gns, the best performance by breed on the day. 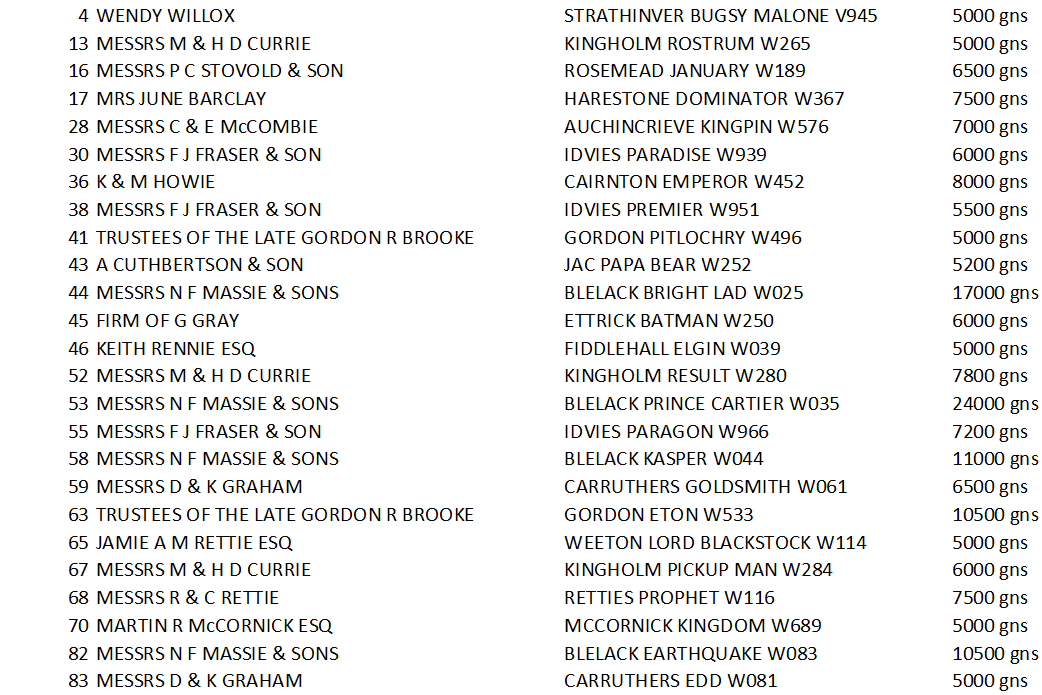 No Question the roll of honour was dominated by Blelack. It cannot be denied that they dispersed the herd in a Blaze of glory to cap a momentous 50 years of success in the breed. Breeders were keen to get a final piece of the herd to include in their own breeding programmes with four of the top five prices going to the Massies.

Further testament to the position of Aberdeen-Angus in the marketplace there was keen competition outside the top 5 with a Bull from the Brooke Estate, Lot 63 GORDON ETON W533 Reaching 10500 and being bought by the Lindsays at Baldovie. The Cairnton herd of Ken and Margaret Howie took home 8,000gns, for their bull, lot 36 CAIRNTON EMPEROR W452 going over the water to the Norther Irish breeder Robin Lamb from Armagh. Three bulls from the Kingholm stable of Matthew Currie; lot 52 KINGHOLM RESULT W280, lot 67 KINGHOLM PICKUP MAN W284 and lot 13 KINGHOLM ROSTRUM W265 attained 7,800, 6000 and 5000gns respectively.

7500 gns changed hands for two consignees with the Barclays putting forward HARESTONE DOMINATOR W367 and the Retties herd putting forward RETTIES PROPHET W116. They went to new owners, with the Harestane bull going to the Innes family at Dunscroft, Huntly and Liam Muir taking the Rettie bull over the water to Orkney.

The sale was a fantastic spectacle and a testament to the breed’s position in the pedigree world in the UK, cementing its place at the very top of the breed choices available.

Several new breeders were welcomed to the fold from both the pedigree and commercial world and the word on the street is there are still a great deal more to come. Aberdeen-Angus has a reputation that is the envy of many in that we can demonstrate the cattle are easily managed, good to keep and perform very well as either pedigree or commercial animals. The resultant stock can be taken through to slaughter, producing beef with an enviable reputation. Consumers recognise the Aberdeen-Angus as a sure sign of quality when printed on a menu or pack.

On behalf of the consignors and the Society we wish all purchasers at the sale the very best of luck with their new assets and look forward to welcoming you to further events that we have planned.