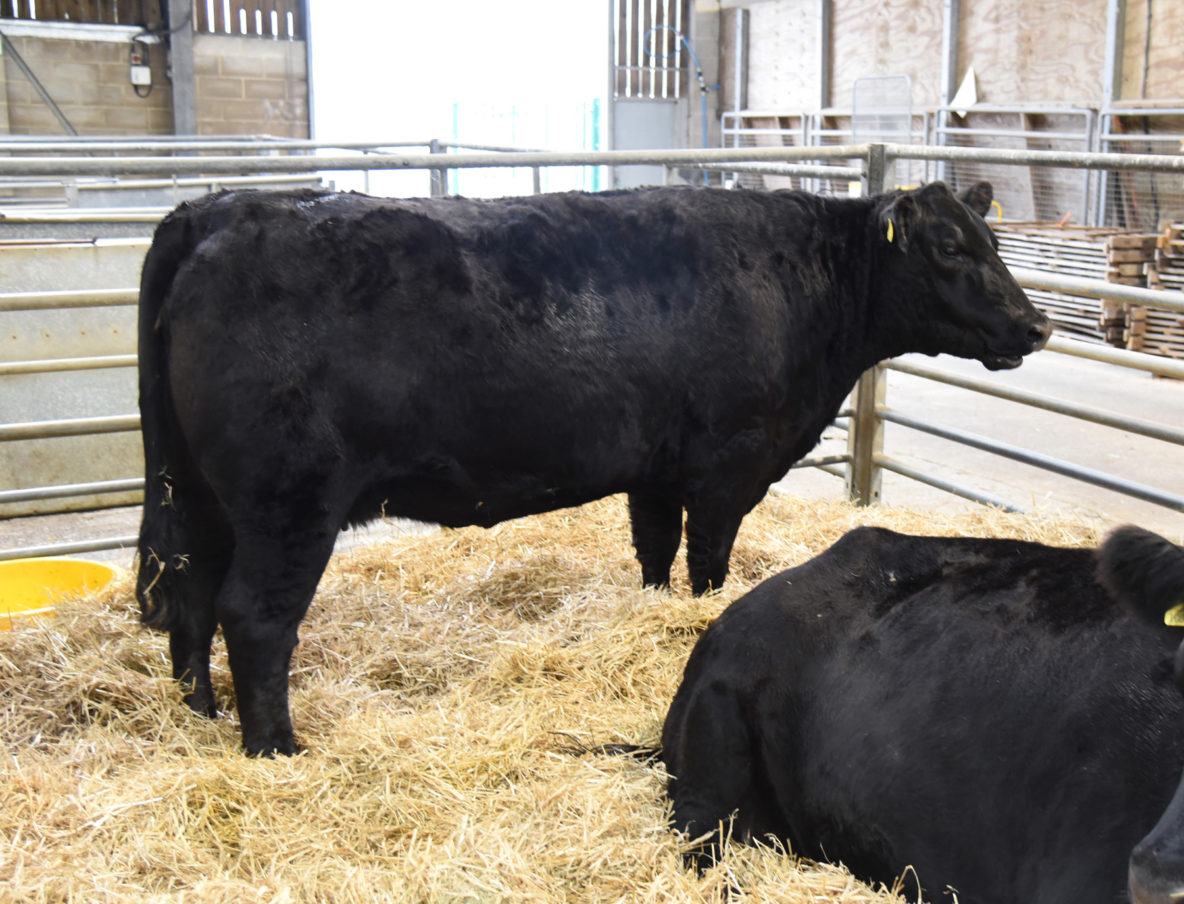 Their annual herd reduction sale was responsible for all but two of the total turnout of 39 head, the majority of which found new homes and claimed the two leading prices of 4,200gns and 4,000gns. 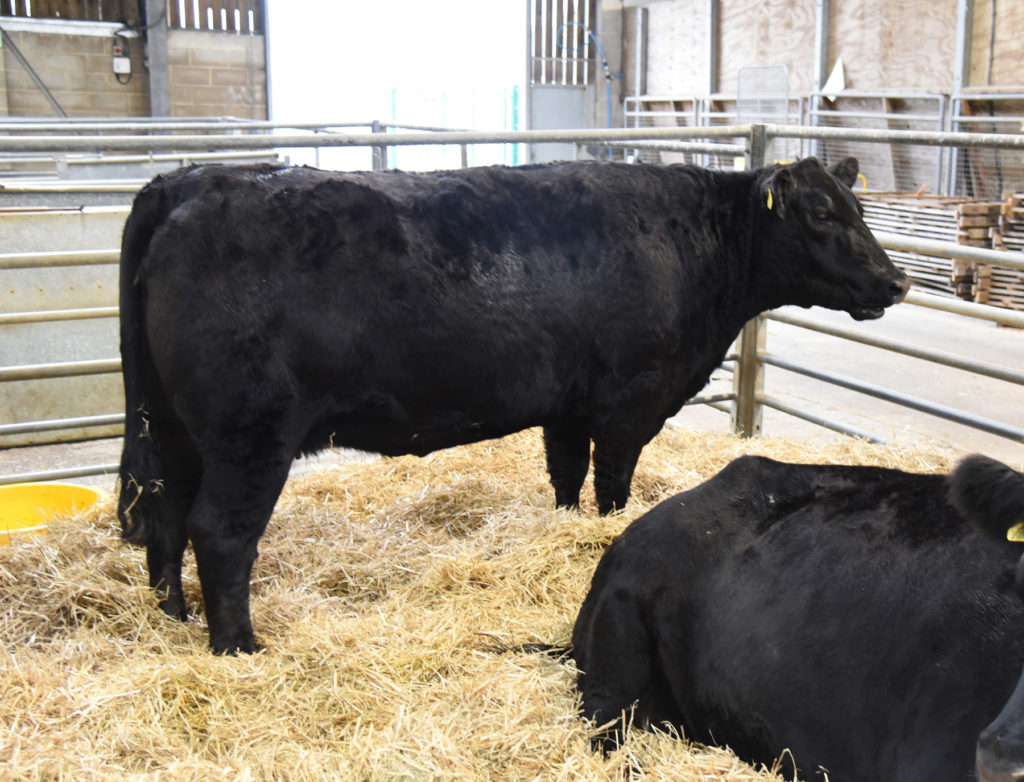 Messers Burgess had travelled down with near neighbour Donald Graham, who runs the Carruthers Angus herd at Corrie, Lockerbie, who didn’t make the return journey empty handed when also adding three from the Airedale offering. Another well-known Scottish breeder, Mark Wattie, who runs the Tonley herd near Alford in Aberdeenshire, was also among the purchasers.

Back at the top end, making 4,000gns was Airedale Kylie R406, a five-year-old daughter of Rawburn Ernst M552, also of Lockerley Legolas G850, out of the Blelack Duke J262 (ET) daughter, Oak Moor Kylie M157. She sold with her third calf at foot, an August 2020 born Airedale Lord Sinden T542 son, the outfit joined RA Nicholson in Brandesburton in the East Riding of Yorkshire. 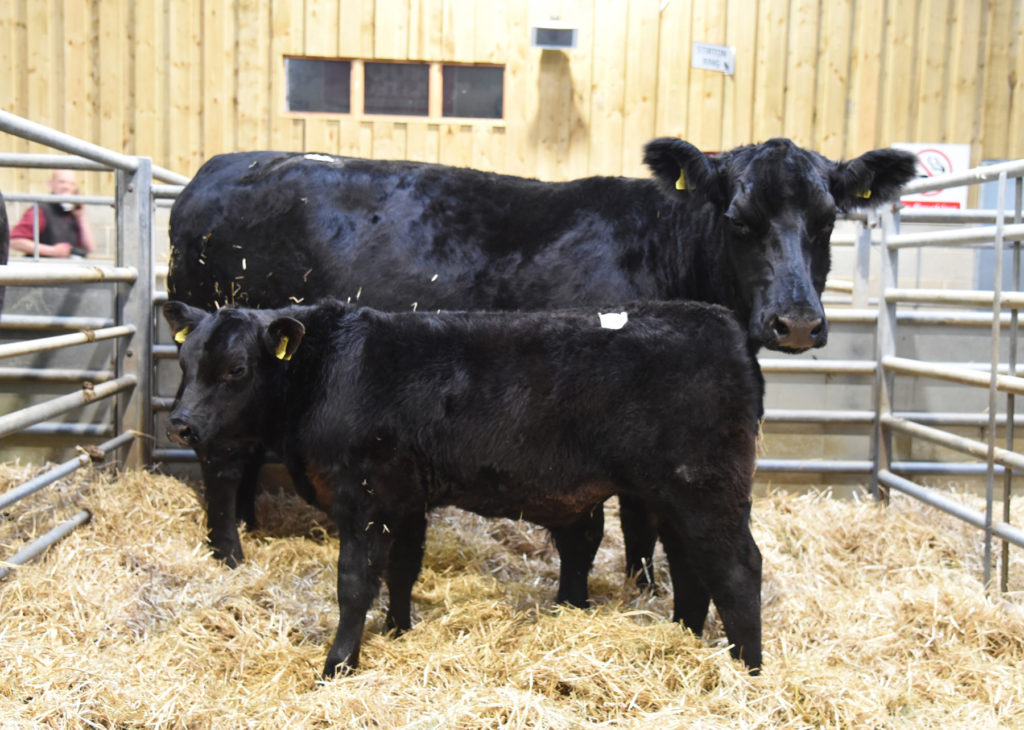 The Isherwood’s sold other lots at 3,600gns, 3,200gns and 3,000gns, with their 37-strong consignment – just three returned home – achieving an overall selling average of £2,100 per head. Seventeen in-calf heifers themselves averaged £2,563, while nine cow and calf outfits, two with twin calves, averaged £2,158.

David Isherwood explained: “As we have done in the past, the cows offered for sale gave prospective buyers the opportunity to acquire some of our best genetics – healthy cows of good breeding and great temperament.”

The Isherwood’s, who farm 117 acres of meadow and pasture land alongside the River Aire, established their award-winning Airedale herd in 2013 to give added prestige and stature to the combined farming and butchery operation – son Josh heads up Isherwood’s Butchers in Silsden, founded in 1987 and now the town’s last remaining traditional family-run butcher. Aberdeen-Angus meat from the herd continues to be in big demand at the Kirkgate shop.

Dr William and Mrs Margaret Taylor, who run the Crook Hill Aberdeen-Angus herd in Stocksfield, Northumberland, made 2,200gns with their single entry, Crook Hill Miss Bishampton U019, a June 2018, daughter of Ardrossan Admiral A2 (AI) (IMP) and out of Liley Miss Bishampton L007 who is by Nightingale Poundman C183 (ET). Scanned in-calf to Rawburn Makka Pakka R076, she remained in North Yorkshire where she joined the Yearsley herd of husband and wife, Adrian and Penny Johnson, from Brandsby, who were responsible for the 2,600gns top price performer at last year’s Skipton breed highlight.

The new ‘normal’ was very much the case at the Aberdeen-Angus fixture, with a socially distanced group of buyers in the sale ring and a large amount of bidders and interested parties tuned in on the internet, which produced bids and several sales.