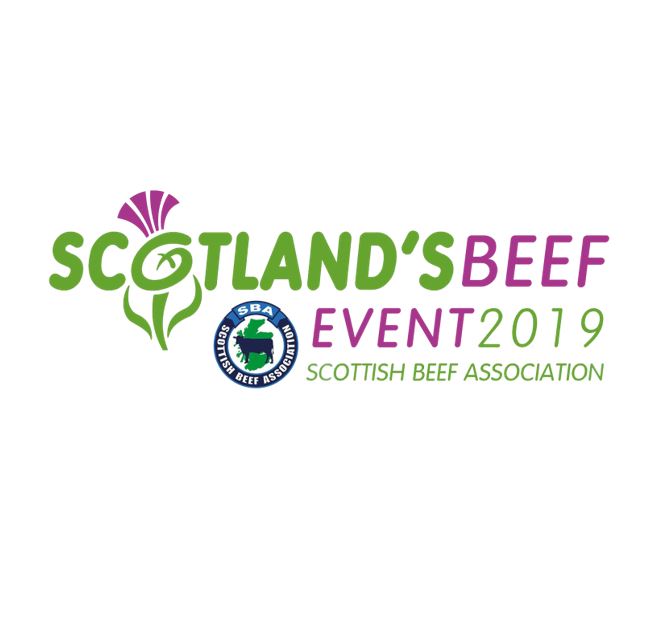 On a day where the weather could’ve been a bit kinder, Scotland’s Beef Event for 2019 was held in Aberdeenshire at the Farm of Robbie and Barbara Milne and son, James, at North Bethelnie, Oldmeldrum, Inverurie. The North East Scotland Aberdeen-Angus Club took charge of the event and put every effort in to make the presence of the Breed felt by all the visitors, for which the Society is very thankful.

The club must be congratulated on their efforts with the stand which they manned expertly, with many of the members observing the rota to make sure that there was always someone there to answer questions and meet and greet the visitors. The catering arrangements were fantastic with “Ad-lib” tea, coffee, sandwiches and cakes available all day – very welcoming on a cold old day in the north. It was lovely to see so many of the members keen to be involved and the teamwork involved in spreading the workload was highly commendable – well done and thank you to all involved.

We had a fantastic day, despite the weather and gale blowing through the stand! It didn’t dampen the enthusiasm – a case of hardy folks and hardy animals that can withstand those conditions!

Over the decades Aberdeenshire has not been the easiest place in which to convince commercial people of the attributes of Aberdeen-Angus; however we received many positive comments about the cattle on show and the messages that were being delivered. In that part of the world the adage is weight pays, but the overall message was that the younger end were making inroads to change that way of thinking. The odd comment was made about the desire to keep cows red and lest we forget there is a red option within the Aberdeen-Angus breed – so that one can always be countered!

There was plenty of discussion about DNA and recent issues within the industry, which is of course a talking point, and we are of course doing as much as we can to ensure that our processes and testing procedures are robust as possible.

There was a great deal of discussion about pedigree females and a school of thought coming from a number of angles, farmers, processors and industry experts who visited and flagged that we are perhaps not making enough of the advantages of the pedigree females. The cows and calves on display and the figures that were on display about them said it all, and there is a great deal of evidence backed by science that favours a smaller cow. With last year’s season being a challenging one, the message was coming back that the larger dams from other breeds proved very difficult to maintain condition, and that fact alone backs the story for a smaller female. It was coming through loud and clear that many were now looking again at the benefits of native breeds.

Lifestyle factors were also points for discussion for those that came to the stand, in an industry that is ageing with the workforce being cut back on farms, the need for a female that just ‘gets on with the job’ is there, and we have this within our breed – easy calving, easy care, lively viable calves needing little or no intervention – they just get up and get on with it. When labour owing to financial pressure is getting thin on the ground this is a huge plus.

The abattoirs and processors were in attendance and they were all very positive and confirmed there is a good demand in the market for Aberdeen-Angus beef and they all reported a real and positive future with Aberdeen-Angus.

The cattle on display also did the desired job impressively. Ballindalloch Earl is a bull with great presence, not hugely tall, but a very deep and powerful bull. There was also a pen of 7/8th bred steers that had performance figures on display for discussion. At just over 15 months and weighing up to 640Kg, these would be U-grade, with only having been fed on grass up until a couple of months ago – a great example of what the Angus can achieve at low cost. Alongside this were 2 commercial 2 year old heifers with well grown calves on them that were taken out the field the day before. This was exactly what was needed as an example to the “Big Cow Men” of what can be achieved with a smaller cow.

The message from many is that we have both ends of the market – the terminal and the maternal.  We have won the battle for the terminal side and need to not forget the attributes of the Aberdeen-Angus cow as well, which will help with the challenges of the export market when the ongoing Brexit situation is resolved. The other breeds are majoring on marketing females, as perhaps Aberdeen-Angus is the sire of choice for many. We need to be careful not to lose ground to other breeds as they are heavily promoting the dam line. We need to take this on board, accept that we have to remind the commercial breeders how great our females are and very quickly we will start to see even more demand for our pure females. Being terminal and maternal is not a conflict. All the benefits of keeping Aberdeen-Angus need to remain clearly marketed in the strongest possible way.