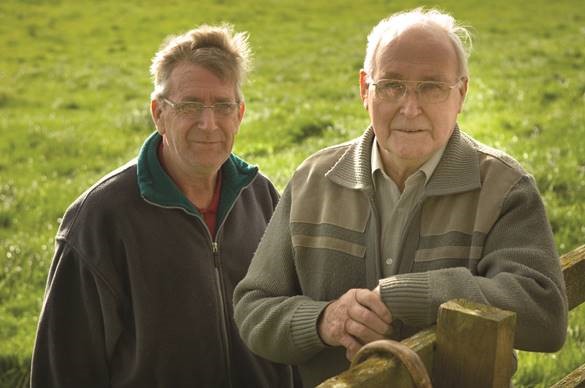 Picture: Sandy Senior the right who passed away and his son also Sandy is on the left.

The Aberdeenshire farmer who bred the animal which became the model for the life-size bronze sculpture of the Aberdeen-Angus bull which stands on the outskirts of Alford has died.

Until his retirement a few years ago, Sandy Fordyce (91) farmed at Bridgefoot, Kemnay, with his son, also Sandy, and hit the headlines at the Perth bull sales in February, 2000, when, with the Aberdeen-Angus breed in ascent, his bull, Jeremy Eric of Bridgefoot, sold for 28,000gns which was the highest price paid for an Aberdeen-Angus for 35 years since the post-war heyday of the breed in the early 1960s.

Much to the disappointment of the family, the bull failed to make the prize list at the show on the day before the sale, despite having won the bull calf championship at the Black Beauty Bonanza show at Thainstone two months earlier.

But the English judge, the late Norman Thomas from Oxford, didn’t rate the bull which he felt, although perfectly formed, lacked the size breeders were looking for in the modern Aberdeen-Angus.

But many other leading breeders had other ideas and after a keen bidding dual between the Galloway family of meat processors, Scotbeef, who own the Cardona herd at Doune, Perthshire, and the Fraser family, owners of the Idvies herd at Forfar, Alistair Fraser emerged as the successful bidder with a bid which stunned the packed ringside.

The bull, whose pedigree boasted some of the best bloodlines in the breed, proved a highly successful sire at Idvies, and became one of the most widely used bulls in the UK and Ireland, and indeed over the world, through semen sales.

The sculptor for the bull was Fife-based David Annand, the son of a former banker in Alford, and the sculpture was unveiled in 2001 by the Prince of Wales, who has an Aberdeen-Angus herd at Highgrove, in the presence of the Queen Mother who, as it turned out, was making her last public appearance in Scotland before her death. The Queen Mother was an enthusiastic breeder of Aberdeen-Angus at Castle of Mey and patron of the Aberdeen-Angus Cattle Society for 64 years.

Mr Fordyce and his late brother, Stephen Mr Fordyce and his late brother, Stephen, were for many years renowned finishers of top-quality Aberdeen-Angus cattle for the commercial market, finishing around 600 cattle a year, all of which went to the Portlethen meat plant when it was operated by William Donald. Sandy was a regular winner at fatstock shows and had the unique distinction of winning the championship at the Aberdeen Fatstock Show at Kittybrewster four years in succession in the 1960s, after which he missed a year to exhibit at the Scottish National Fatstock Show at Perth, where he won the award for the best pen of four cattle, before returning to Kittybrewster to take the championship for another three years in a row.

The pedigree herd was founded in 1995 when Mr Fordyce and his son, Sandy, went to the Perth sales with the intention of buying a Limousin bull for crossing but were so impressed with an Aberdeen-Angus bull, Ernest 3rd of Ladywell, that they bought him instead and later added pure-bred females to start the pedigree herd.

Mr Fordyce, who had retired to Inverurie, is survived by his wife, Ena, and sons Sandy and Neil, daughter, Gail, and four grandchildren.