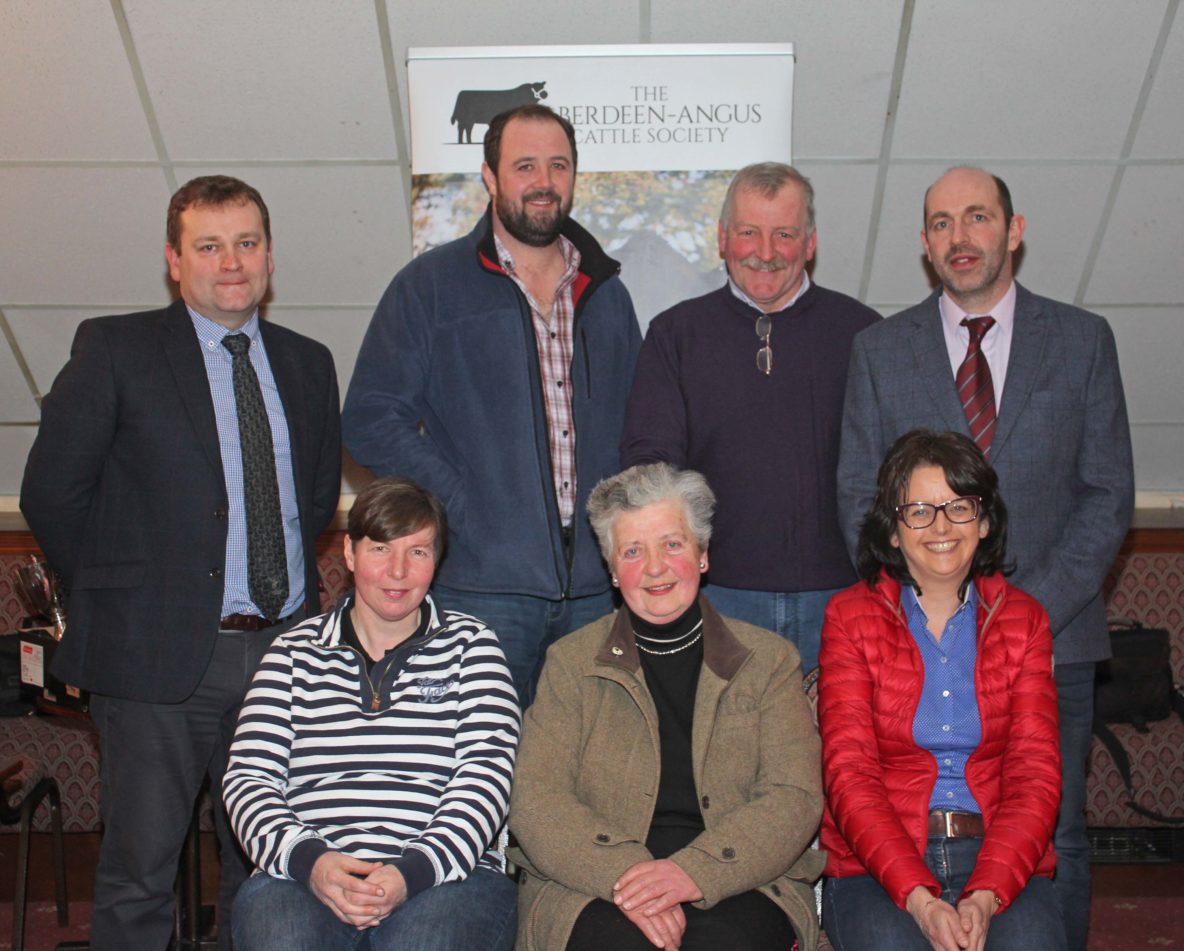 Outgoing treasurer Ruth Strain outlined the club’s financial affairs, while secretary Cathy O’Hara gave a resume of its many activities during her first year in office. Highlights of the year included the four-day Balmoral Show, the hotly contested herds competition, and the charity BBQ and auction which raised £2,300 for Air Ambulance Northern Ireland. Members also enjoyed a number of successful shows and sales, the YDP Workshop, a stockjudging event at the Wallace family’s Baronagh Herd, and a trip to the West Moreland County Show and herd visits.

Cathy O’Hara ended her report by saying: “Our annual calf show attracted a good entry of quality calves, and we are ending the year on a high note following a successful February show and sale at Dungannon. Prices topped at 4,500gns, and the sale average was up on previous sales.”
During the Chairman’s Report Alan Morrison thanked the office bearers and committee members for their support during what he described as a ‘productive’ year.

He announced that six provincial shows have been selected to host the Ulster Championships in the coming years. “The 2019 event will be held at Antrim Show, and we are also planning to host a Summer Show Spectacular at this year’s Clogher Valley Show. Schedules will be available in due course, and the Summer Spectacular will boast a generous prize fund and a selection of championships.”
The club’s Events Programme for 2019/20, sponsored by Fane Valley Stores, was unveiled at the AGM. It features a host of club events, the first of which is a grooming and showing skills workshop at Alan and Lana Cheney’s Lana Herd, Trillick, County Tyrone, on Saturday 30th March at noon.

The election of office bearers was conducted by club member Leo Cherry from Cookstown. Mr Cherry congratulated the outgoing team on another successful year. “The club had an action-packed year with 21 various activities and events. These things don’t just happen, so well done to everyone involved.”

A number of trophies and awards were presented to members to mark their successes at the various summer shows during 2018. Recipients included Moses Irwin, Adrian and Graeme Parke, the Matchett Family, W and V Vogan and James Porter.

Members attending the AGM were entered into a free prize draw to win semen from Aberdeen-Angus bulls Rawburn Fastball and Netherton Matrix. The prizes were sponsored by Norbreck Genetics and the winners were Gerard McPeake, James Mallon and Alan Cheney.

A pedigree Limousin breeder, Dr McAuley is a director in the Firmount Veterinary Clinic. He explained that the Myostatin gene is a hormone that directs muscle to stop growing. “It is common in lots of species, including Beltex sheep and Pietrin pigs, but when the mutation malfunctions it results in double muscling, also known as the culard condition.

“In Aberdeen-Angus cattle Nt821 is a disruptive mutation of the Myostatin gene. It is the breed’s most common gene, and is also found in Galloway, Piedmontese and Limousin cattle.

“There are six myostatin mutations, including Q204 found in Charolais, and F94L predominately found in Limousins. The Aberdeen-Angus Society has identified F94L in a small number of animals.”

Dr McAuley continued: “Research is on going in ROI, but approximately one third of all beef calves born in Northern Ireland are bred from a sire carrying the double muscle gene.”

Myostatin testing started in 1996, and while the presence of myostatin gene mutations has advantages such as improved feed efficiency, higher kill out percentages, and the enhanced tenderness of beef with a reduction in fat, it has also been associated with numerous disadvantages for cattle breeders.

The disadvantages of double muscling include foetal size, resulting in enlarged muscular conformation and difficult calvings.
Calves can be born with over developed or enlarged tongues, and there is an increased incidence of contracted tendons. They will also have less resistance to diseases such as pneumonia, and will be intolerant to exercise, and more at risk of developing fractured limbs.
Cows may also have compromised fertility, a smaller pelvic area, and less milk. Bulls will have a smaller scrotal circumference, and be prone to fractured limbs.”

Images from the AGM is shown below: 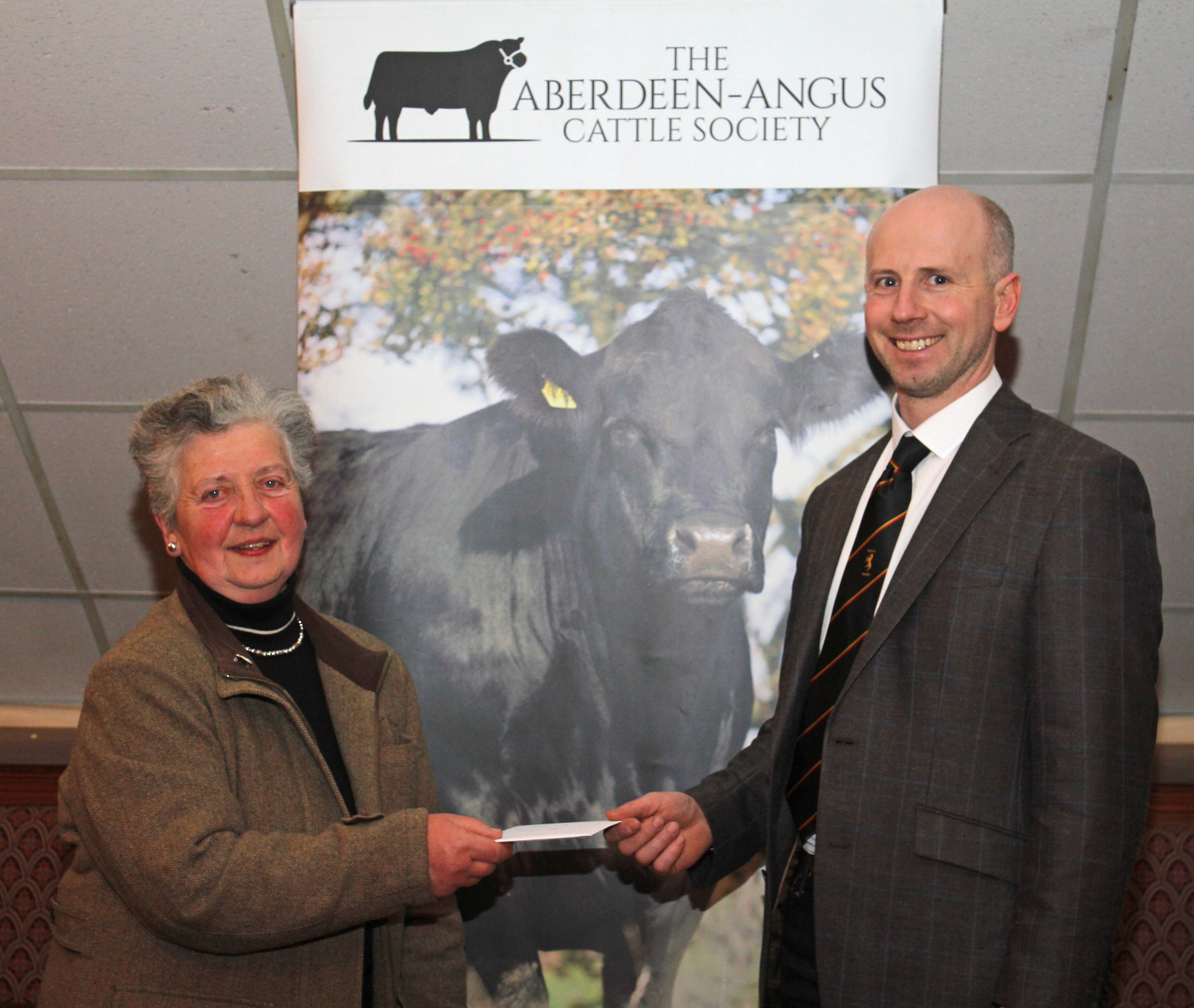 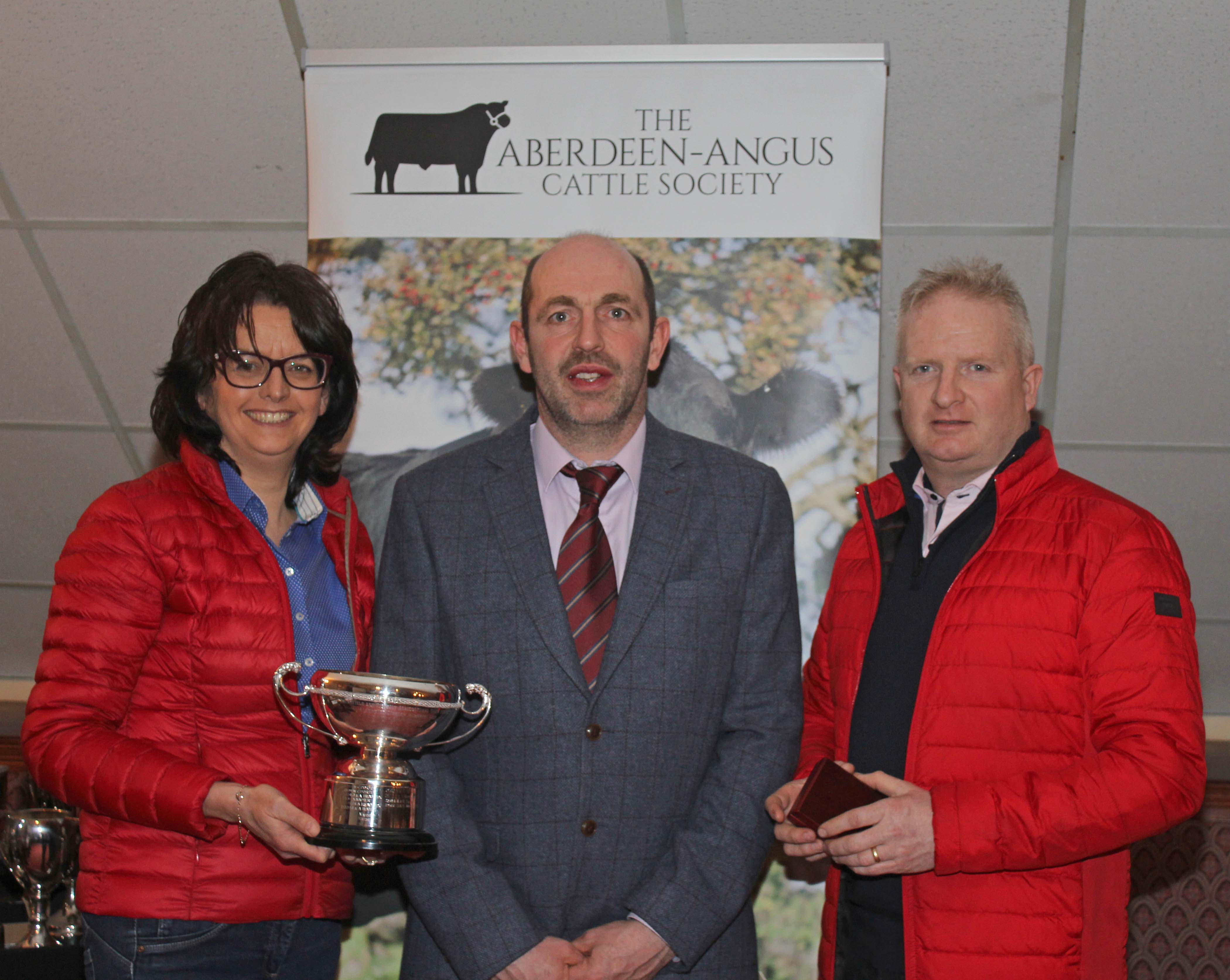 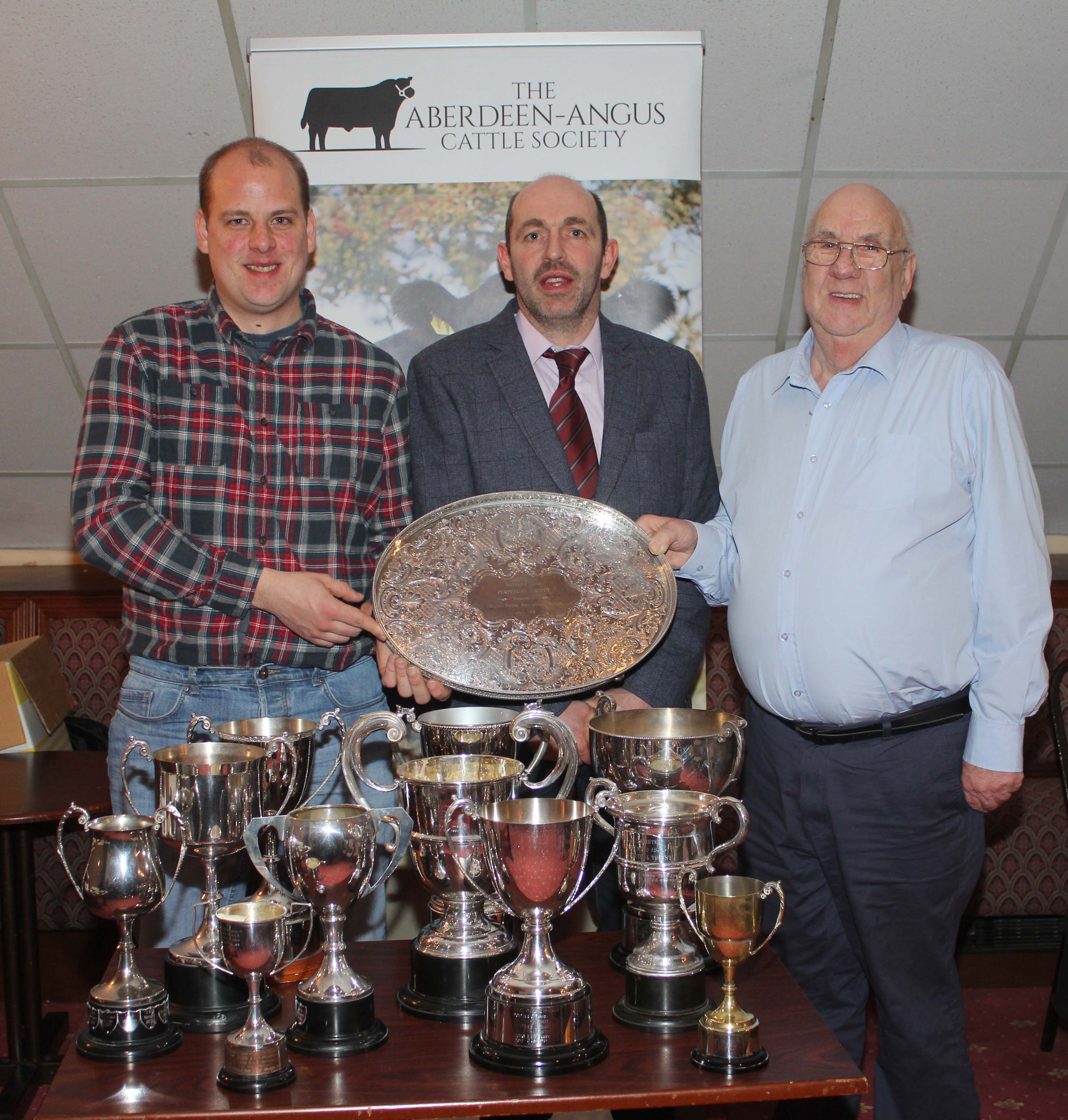 The Coolermoney Herd owned by Adrian and Graeme Parke, Strabane, won an array of awards in 2018. They received their prizes at the NI Aberdeen Angus Club’s AGM from the society’s vice president Alan Cheney. 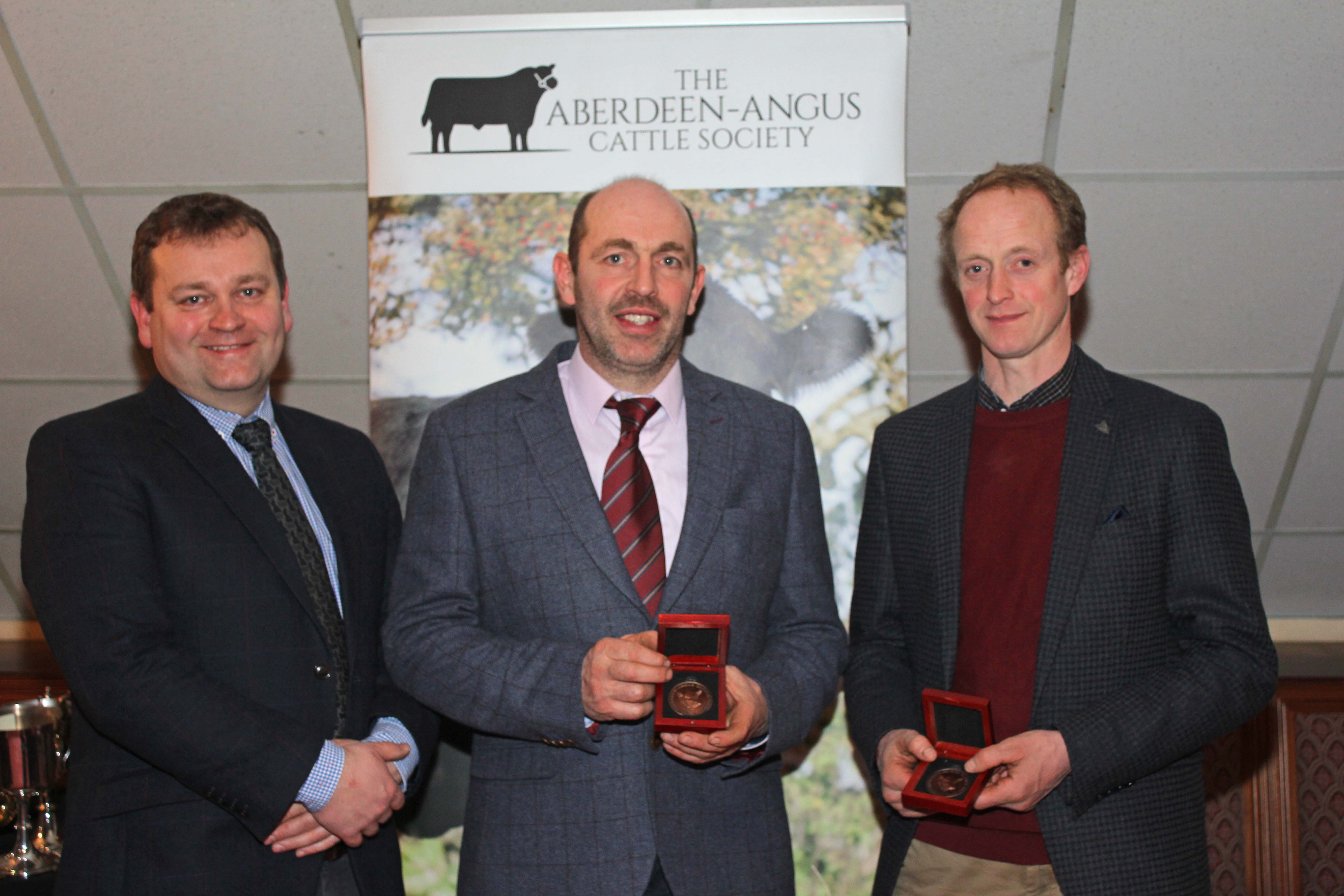 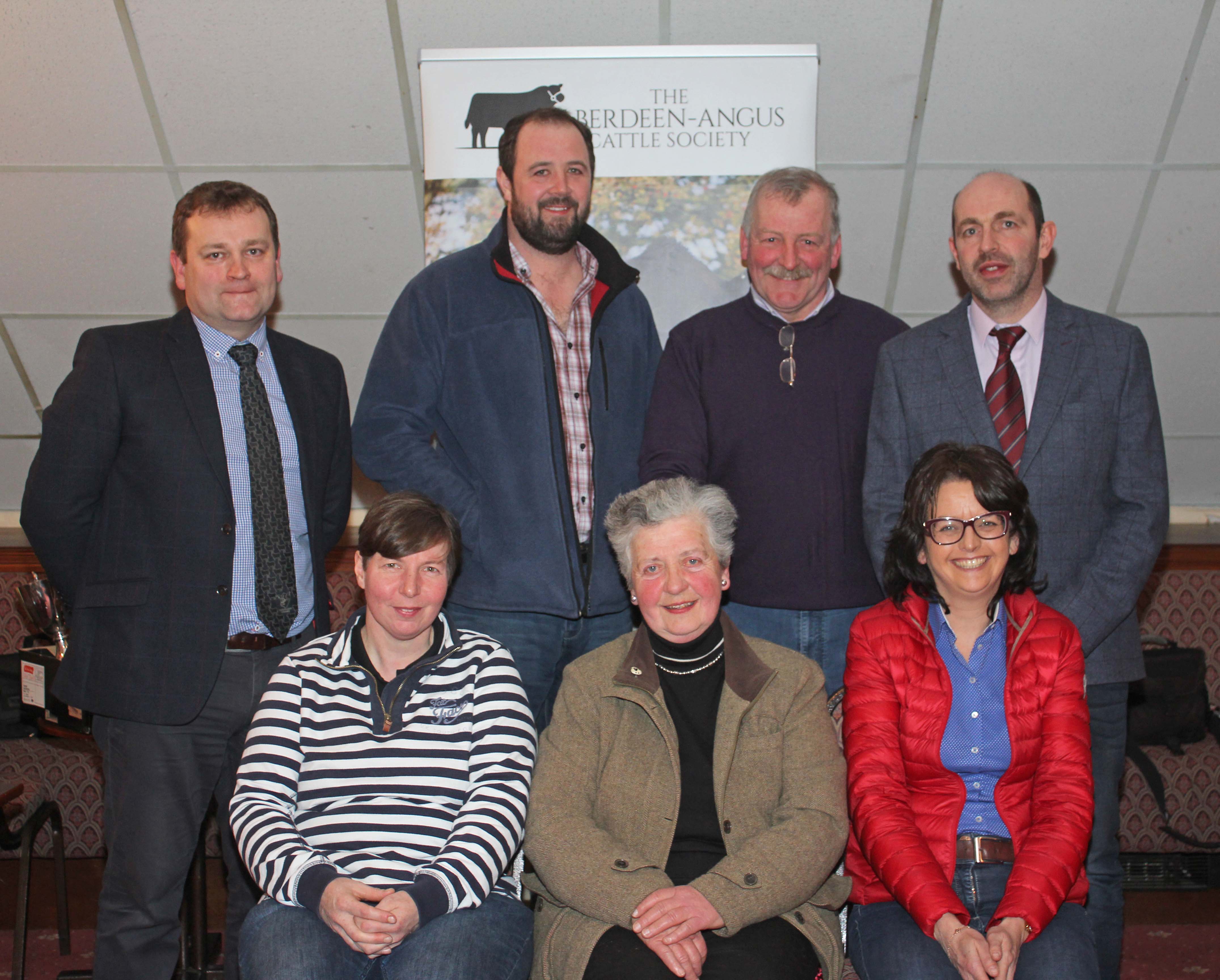