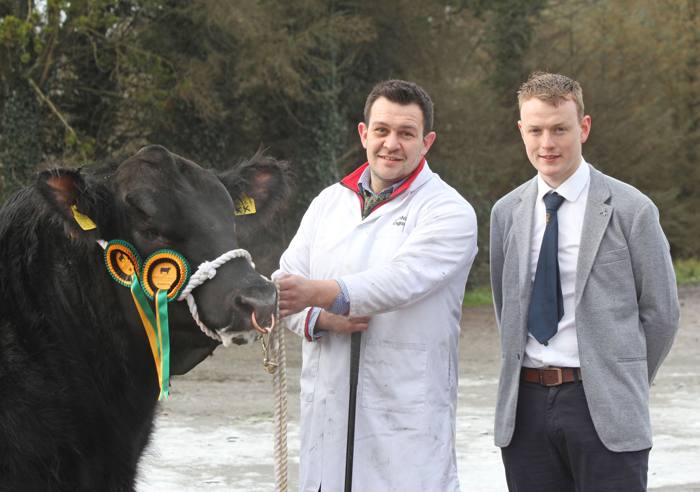 There was a buoyant trade for quality Aberdeen Angus bulls at the society’s Dungannon show and sale.

Prices soared to a top of 5,200gns, and following an 80% clearance auctioneer Trevor Wylie reported that 12 lots changed hands to average £3,167 – an increase of £122 on this time last year.

“Today’s sale reflects the growing demand for Aberdeen Angus cattle. The brand is continuing to gain momentum, and is currently enjoying a strong position on the national and global markets.

“Aberdeen Angus beef is recognised for its quality, taste and texture. The easy calving and early maturing Aberdeen Angus ticks the boxes for both farmers and processors, as its economical to finish and produces lower carcase weights.

“Farmers are aiming to produce the best beef they can, and the Aberdeen Angus delivers quality, and the fits the market requirements of the processor, retailer and consumer.”

Hitting the headlines in both the show and sale rings was the June 2018 Richhill Rusty U164 TSI+34 SRI+40 bred by Robin Lamb and sons from Richhill. Sired by the herd’s 6,500gns stock bull Keirsbeath Kingsland R537, he is out of the home-bred SAV Brave 8320 daughter Richhill Rosanna N403 – one of 40 cows in the County Armagh herd. The Rosanna family has featured consistently over the years in the best cow family category of the NI Aberdeen Angus Club’s annual herd competition.

This much-admired bull caught the eye of judge Barry Smith from the 25-cow Lawsons Ford Herd at Cootehill, County Cavan, to take the male championship ribbons. “This bull really caught my eye. He has superb ring presence, a great Angus head, tremendous breed character and conformation, and correct feet and legs. Attracting a top bid of 5,200gns he sold to James Thompson, Culmore, County Londonderry.

Second highest price of the day 3,700gns, was paid to Nigel, Gail, Sarah and Sam Matchett from Portadown, for the fifth placed Birches Lord Harrison U614 TSI+34 SRI+46. Born in May 2018, he was sired by stock bull Cheeklaw Emlyn P480 – All Ireland Champion in 2017, and is bred from the successful show cow Mogeely Lady Hilda H967. Ranked in the breed’s top 20% for eye muscle area +4.9, this one was snapped up by Michael O’Brien from Poyntzpass.

Following close behind at 3,100gns was the second prize winning Coltrim Edmundo U003 TSI+29 SRI+46 bred by Neville and Ivan Forsythe, Moneymore. Born in October 2018, he was sired by Wedderlie Ergo M574, and is out of the Oakchurch Duster M109 daughter Coltrim Evana S605. Ranked in the top 10% for calving ease +3.7, he sold to dairy farmers Andrew and Liz Addison, Upper Ballinderry, Lisburn.

“This is another stylish bull. He is well made, has great spring of rib and good bone,” added the judge. This one came under the hammer of Trevor Wylie at 3,000gns, selling to Linton Selfridge from Maghera.

Also selling at 3,000gns was the fourth placed Coolermoney Lord Hublo U876 TSI+31 SRI+51 bred by Adrian Parke, and son Graeme, from Strabane. This July 2018 entry was sired by Rawburn Boss Hogg N630, and is out of a home-bred dam by Steil Hero 202. Ranked in the top 5% for milk +21, he sold to John McGovern from Newtownbutler.

A draft entry of females from David Whan’s Slievecroob Herd at Dromara, peaked at 1,400gns, realised by the April 2018 Glen Cowie Evie U472. She was sired by Blelack Evolution R454, and is bred from Balgay Egyptian Queen P285. Buyers were Messrs Rea from Aughnalcoy. 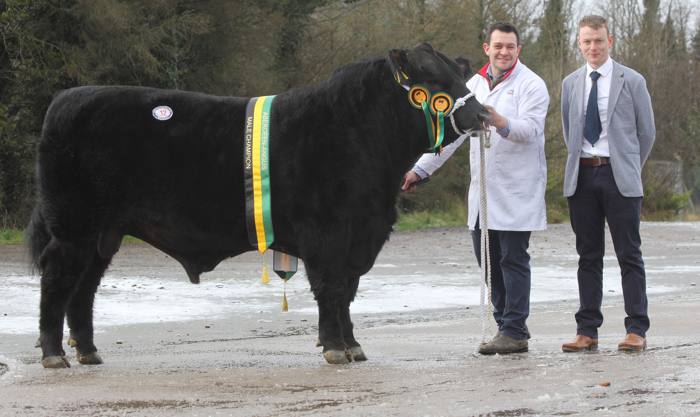 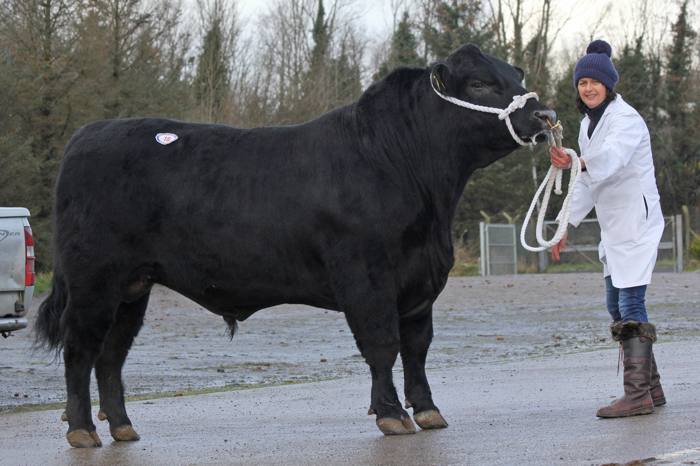 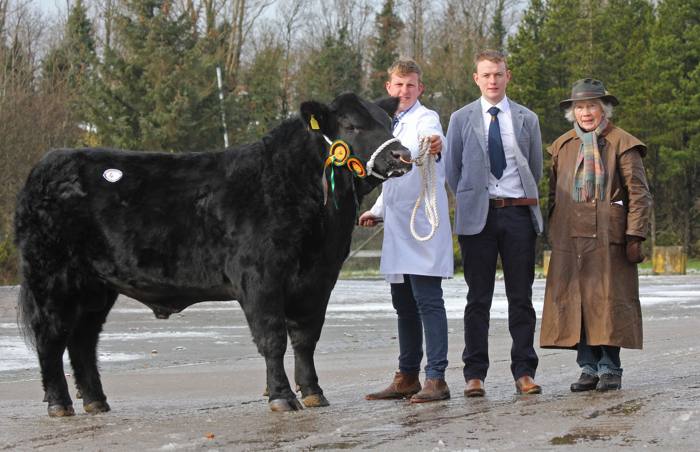 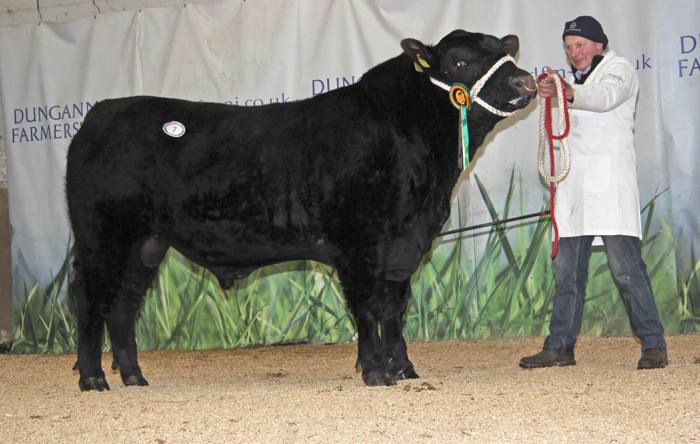 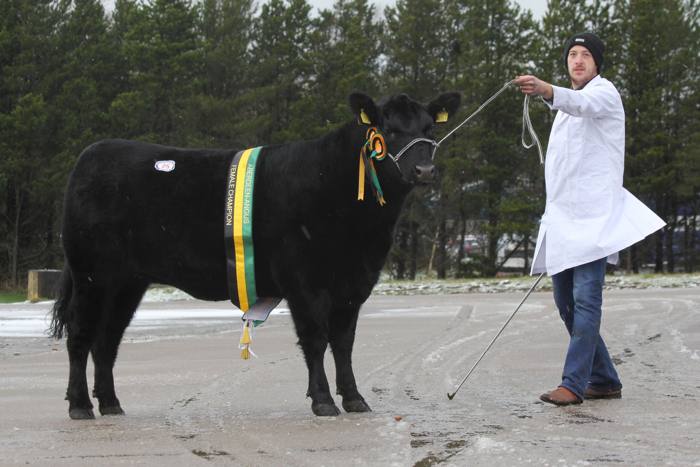 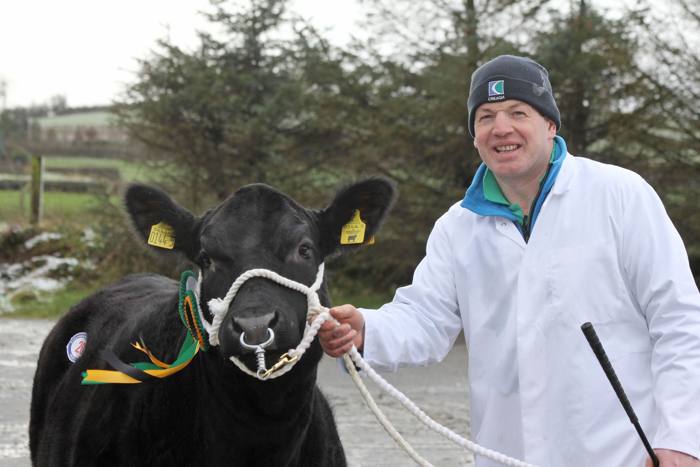 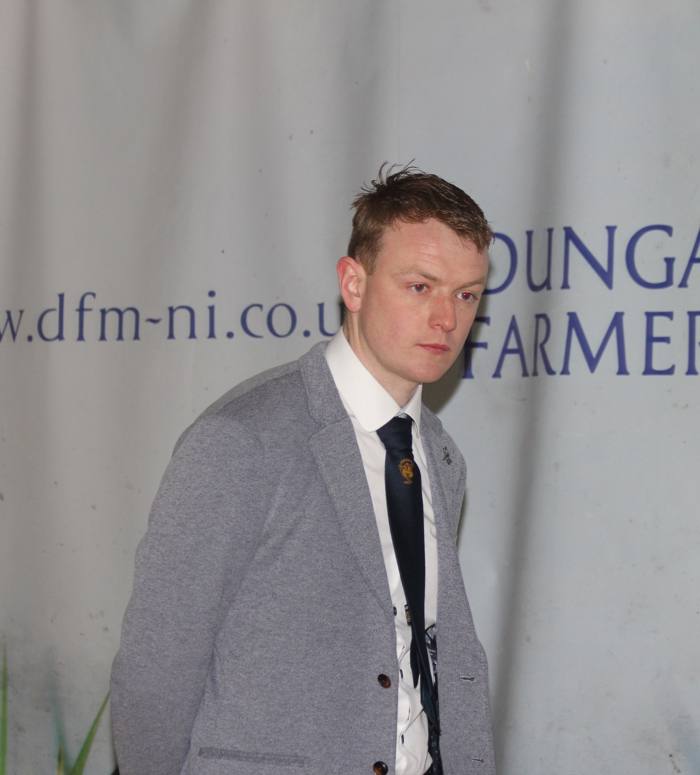 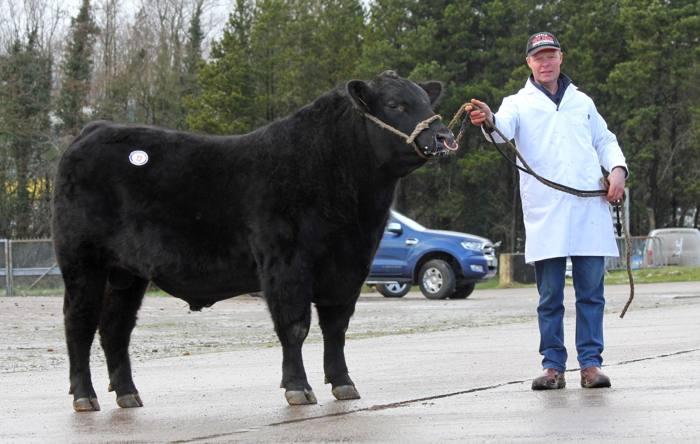 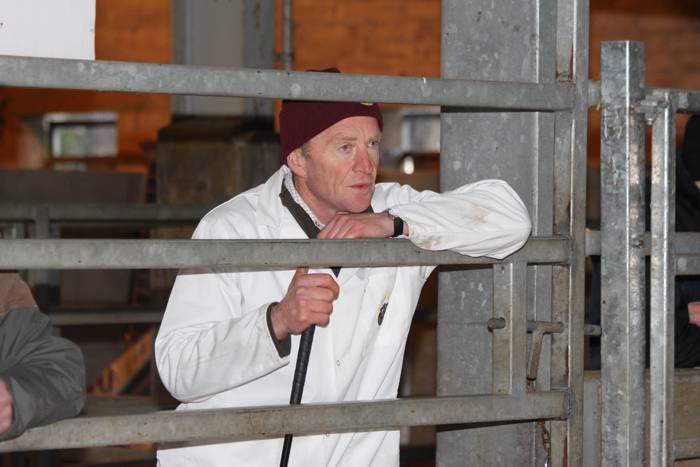 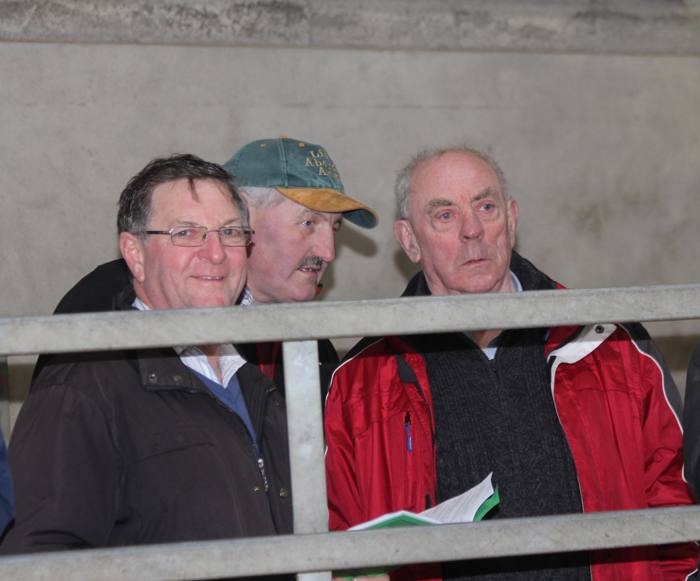 Keeping an eye on the Aberdeen Angus judging at Dungannon are David Whan; Dessie Martin and Hugh Dickson.