Aberdeen-Angus bulls attracted a steady trade and reached a ceiling of 5,100gns at the Society’s regional sale, hosted by Dungannon Farmers’ Mart.

Auctioneer Trevor Wylie described the sale as lively and confirmed that 12 lots achieved a 92% clearance, averaging £3,613 per head – an increase of £446 on the same period last year.

“Trade was brisk from start to finish, with ringside and online bidders keen to acquire Aberdeen-Angus stock bulls for their dairy and suckler enterprises. “

Topping trade at 5,100gns was the twenty-month-old Birches Bellboy V916 TSI+27 SRI+35 bred by the Matchett family – Nigel, Gail, Sarah and Sam from Portadown, who were 2020 winners of the NI Aberdeen-Angus Club’s best large herd award.

Second highest price of the day 4,800gns was paid to Jonathan and Lisa Doyle, Cookstown, for the twenty-one-month-old Drumhill Lord Highway V271. He caught the eye of Robin Boyd who was bidding on behalf of AI Services (NI) Ltd.

Sired by stock bull Wedderlie Tarquin L383, this one was bred from the Blelack Prince Consort A286 daughter Drumhill Lady Heather P366 – from one of the best cow families in the 40-cow herd.

Next best at 4,300gns was the twenty-month-old Glen Cowie Royal Senator V634 brought out by Gary Hanna on behalf of barrister Iain Colville, who runs a herd of 15 pedigree cows at Newtownards. He was sired by the herd’s former stock bull Blelack Evolution R454 ET, and is bred from foundation female Ardoyne Royal Lavender N231 – 3,300gns female champion at Stirling (Oct 2014). He joins the suckler herd based at Castle Dobbs near Carrickfergus.

The second youngest bull in the catalogue, and the highest ranking in terms of Breedplan terminal sire index +55 and self-replacing index +72 was Solitude Elite V777 ET bred by John, William and Andrew McMordie from Ballygowan. He came under the hammer at 4,000gns, selling to John and Ann Henning for their noted Drumcorn Herd at Moira.

This fifteen-month-old bull was sired by Netherallan Peter Pershore E052 ET, and is bred from Rawburn Ellen Erica G669 who has produced sons to a top of 10,000gns.

The Drumcorn prefix comprises of 14 breeding females. John Henning commented: “We were impressed by the bull’s EBV figures, and liked his power on the day. Hopefully he will do a good job for us.”

The first bull into the salering was Lurgaboy Bono V013 bred by Joe Conlon from Markethill. This March 2019 entry was sired by Penguin Jock G296, and bred from Lurgaboy Beauty T103. He sold for 3,400gns to dairy farmer Andrew Wilson, Templepatrick.

Mr Conlon sold three bulls from his Lurgaboy prefix to average £3,010 each. 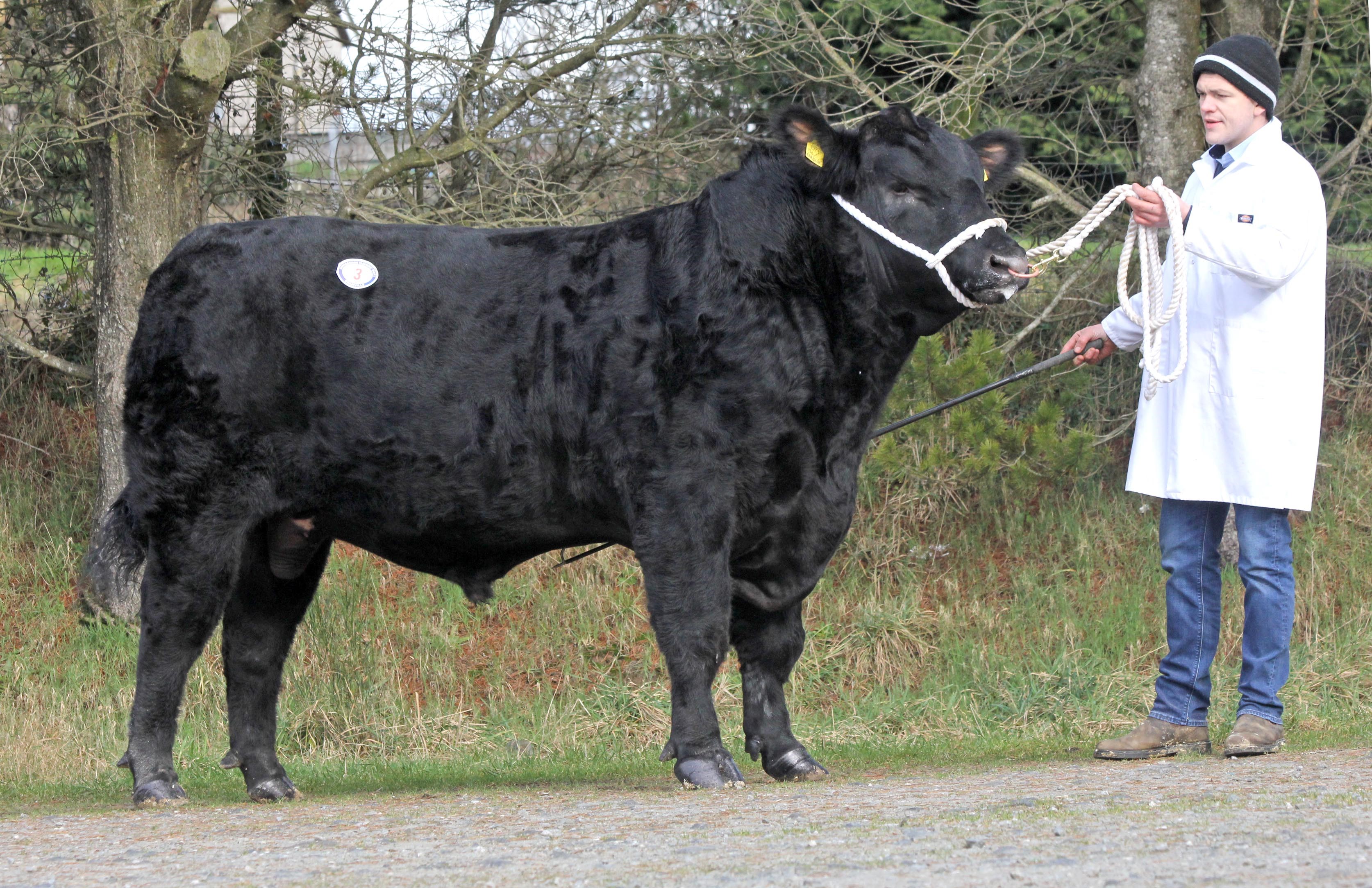 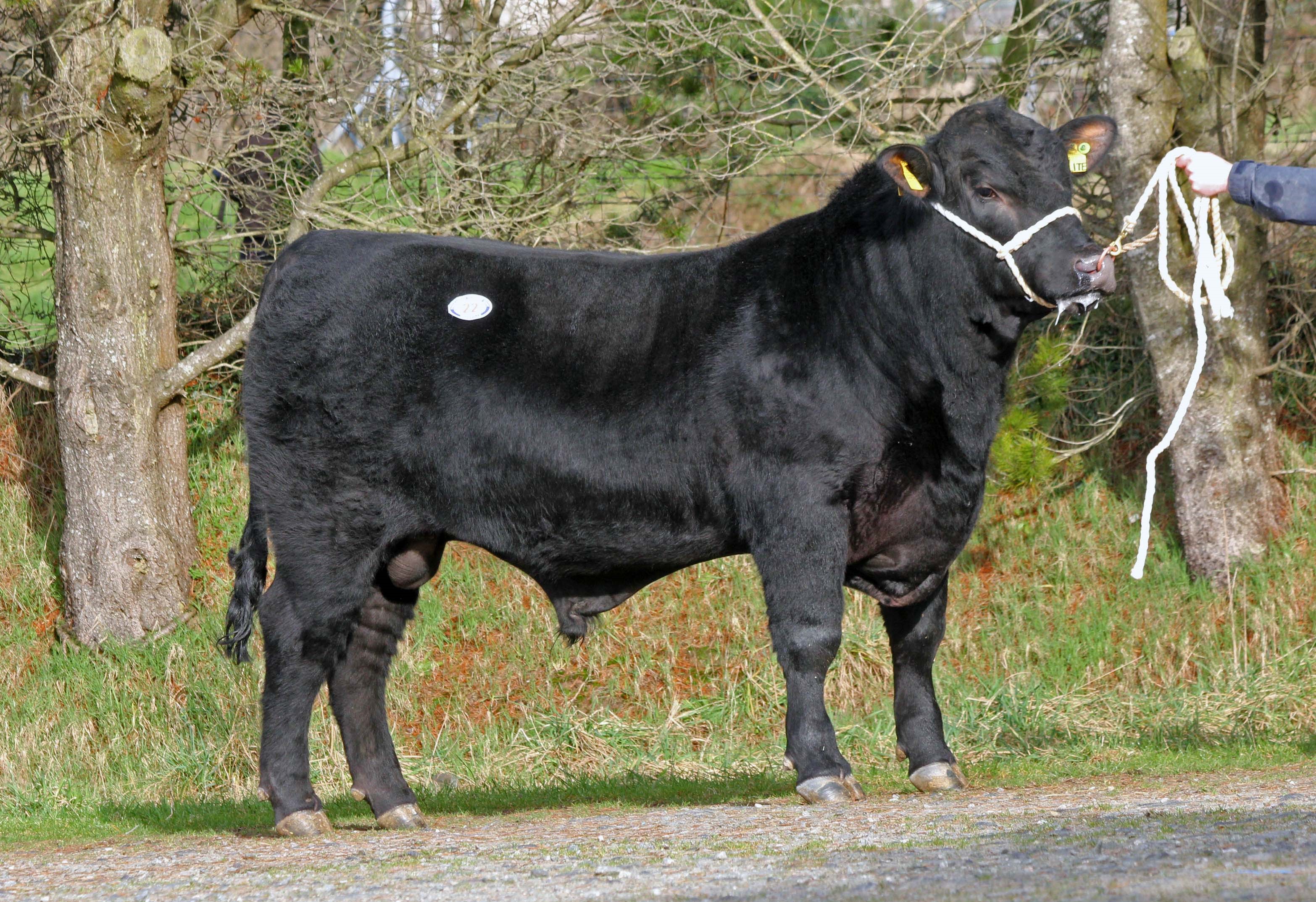