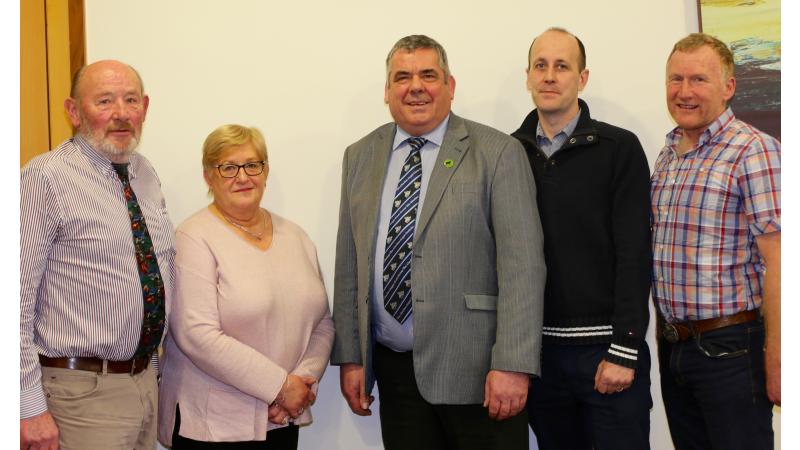 The Irish Aberdeen-Angus Association held its annual AGM at the Mullingar Park Hotel, Mullingar on Saturday, February 16th. Mr. Barrie Turner, Chief Executive of the Aberdeen-Angus Cattle Society had visited Ireland last week and concluded his time in the Emerald Isle by speaking at the AGM. During his visit to Ireland, Barrie also took in the bull sales in Dungannon, NI, spent some time in the Irish Aberdeen-Angus office in Mohill and also took the opportunity to visit a few of the larger pedigree herds in the country too. Barrie spoke to the membership present on the day about his plans for his second year in the role of CEO of the Society and how much he had enjoyed getting to grips with the job during the last 12 months. He also briefed the meeting on the latest developments arising from the continuing uncertainty of Brexit and ended his presentation with his expressed hope to visit Ireland several times more during 2019.

The existing Irish Aberdeen-Angus Association Presidential team, headed up by Senior President, Mr Mack Crowe were unanimously elected to continue their second year in office and Mack spoke about the excellent demand for Aberdeen-Angus cattle throughout 2018 and also highlighted last year’s Premier Spring Sale in Nenagh as one of the best pedigree bull sales in the country on the back of its impressive 90% clearance rate to an average of €2700 and to a top price of €3500. Mack also congratulated the Northern Ireland Aberdeen-Angus Club on the success of their recent Spring sale at Dungannon which saw the buoyant demand for Aberdeen-Angus cattle continue with bulls selling to £4500 at an average of £3000 and a hearty 80% clearance.

Gerry Smyth of Angus Beef Ireland also underlined the continuing robust market trend for quality Aberdeen-Angus commercial stock and noted that the first month of 2019 had seen an increased volume of commercial cattle coming through the producer beef scheme.

The AGM was rounded off by Junior Vice-President, Mr Eustace Burke who presented an overview of the ‘Three Year Plan’. The first details of the plan, namely the genomic testing scheme for pedigree Aberdeen-Angus bulls and heifers had been reported in the mainstream farming press at the end of last year with many more exciting initiatives presented to those in attendance at the AGM. Firstly, each of the regional clubs have been encouraged to streamline their calendar of activities and endeavour to hold the same rooster of events (namely: herds competition, club trip, open day, YDP workshop and summer show competitions) in each region of the country annually. Looking ahead at the sales for the year, the Premier Spring Sale in Nenagh Mart, Nenagh, Co. Tipperary is due to be held on Wednesday, May 1st and entry forms will be available in the coming weeks. Negotiations are also in an advanced stage to hold a second Irish Aberdeen-Angus Association Spring sale in April/May in the heart of prime dairy country and more details about the date and venue will be revealed shortly. The annual Premier Autumn Sale has also been tweaked and will consist of a predominately female offering of cattle (80% females, 20% bulls), which is more in keeping with market demands of the Autumn sale season. The council has also recently compiled a fully functional judges panel of active Aberdeen-Angus breeders, which will be in operation for the 2019 summer show season. Finally, the Irish Aberdeen-Angus Association will also be utilizing a text messaging service for its members and will be bringing out a newsletter three times a year (Spring, Summer and Autumn) to deliver the very latest news and details of the most important upcoming events straight to your doorstep. Regular PR co-ordinator, Edward Dudley has agreed to take on the task of editing the newsletter for 2019 and you can contact him with any Aberdeen-Angus news and events at kilsunnyherd@gmail.com.

As ever, the Irish Associaiton’s website and social media channels will be continuously updated throughout the year and we encourage all members to keep abreast of all of the latest developments in this way and look forward to bringing you more news and updates as they happen.