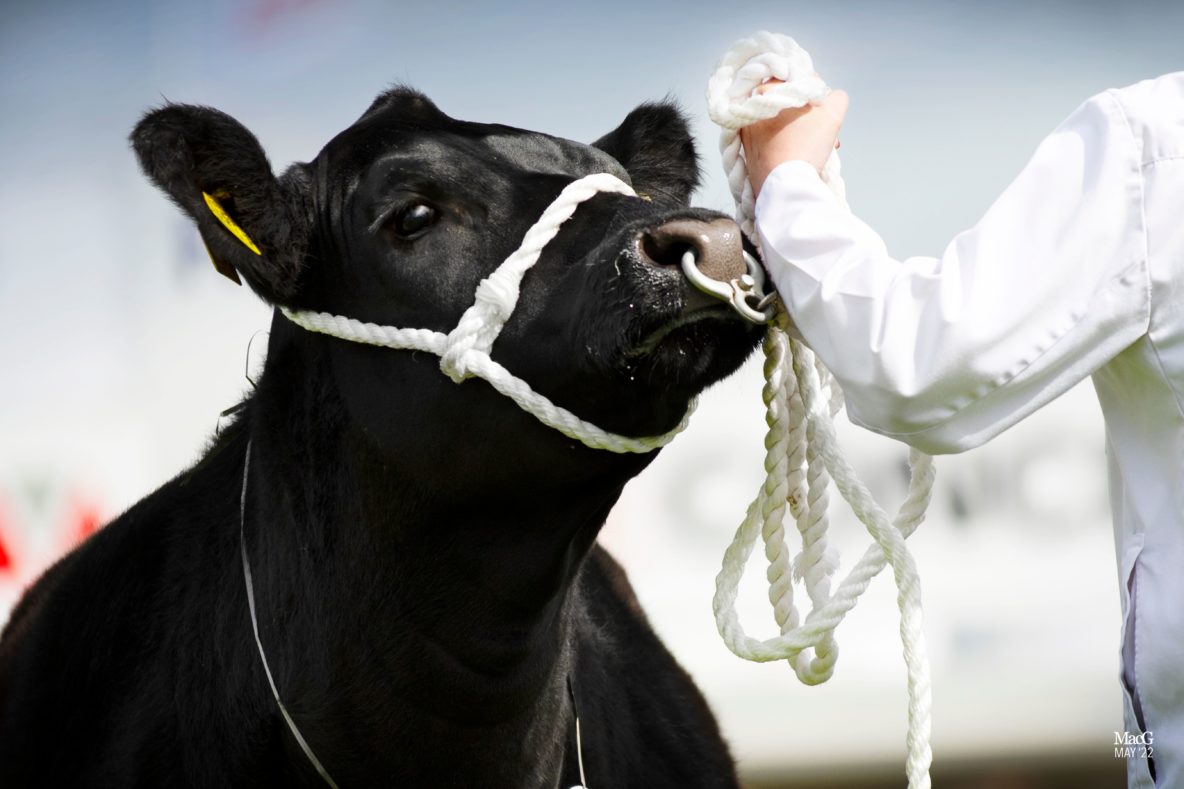 A flashy heifer bred by the Armour family from Dromara won the junior and supreme overall Aberdeen Angus championships at the 153rd Balmoral Show.

This is the family’s second successive Balmoral breed title in eight months, having won the supreme award with junior cow Woodvale Miss Annie U436 at the 2021 show, which was postponed until September due to the pandemic.

Scottish judge Brian Clark from the noted Duncanziemere Herd based at Cumnock in Ayrshire, tapped out Woodvale Delia X867 from the six contenders in the championship line-up at Balmoral Park. 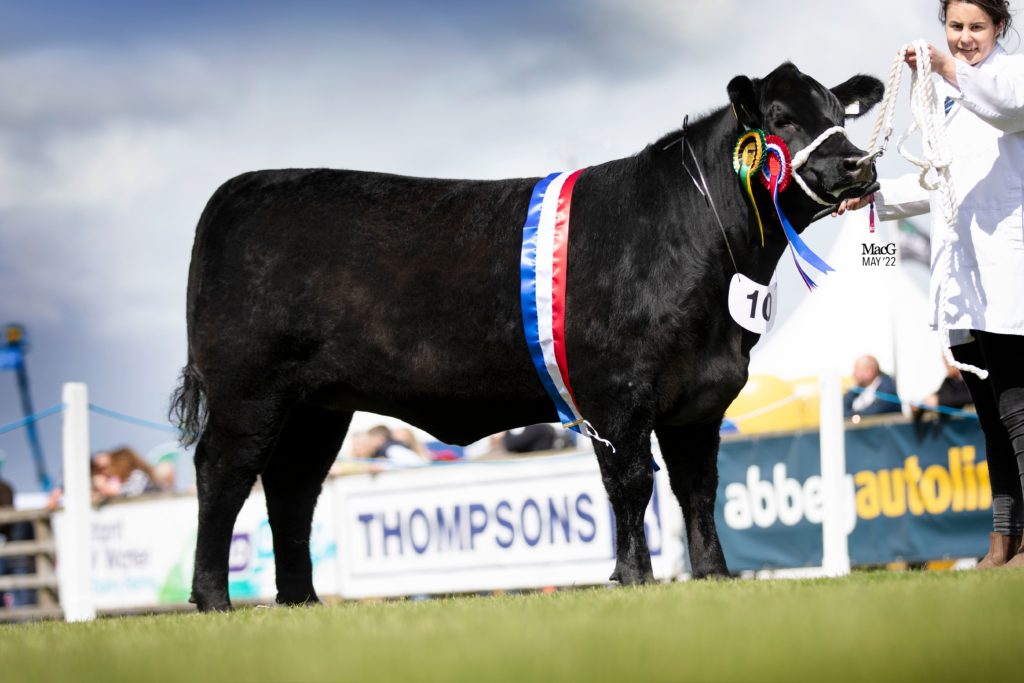 The supreme overall Aberdeen Angus champion at the 153rd Balmoral Show was Woodvale Delia X867 bred by Alwyn and Carol Armour and family, Dromore, Co Down

Alwyn Armour explained: “I bought the maternal grandam Carlhurlie Delight N959 for 3,500gns at Carlhurlie dispersal sale at Stirling in 2016. She was in-calf to Evor, and the result was the heifer’s dam Woodvale Delia.”

Judge Brian Clarke said: “This heifer is very correct and was an easy winner.  She is sweet and feminine, and has that little bit of extra flash.” 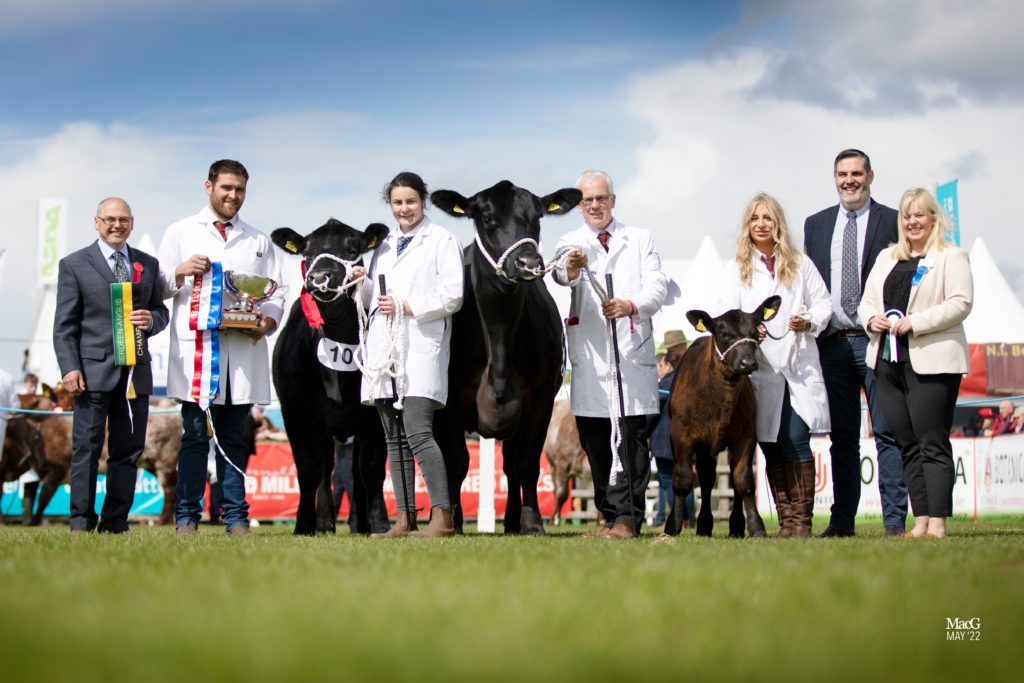 Taking the reserve championship plaudits was the four-year-old cow Drumcorn Lady Ida U492 from John and Ann Henning’s herd at Moira. She was one of three Drumcorn-owned first prize winners competing in the championship. 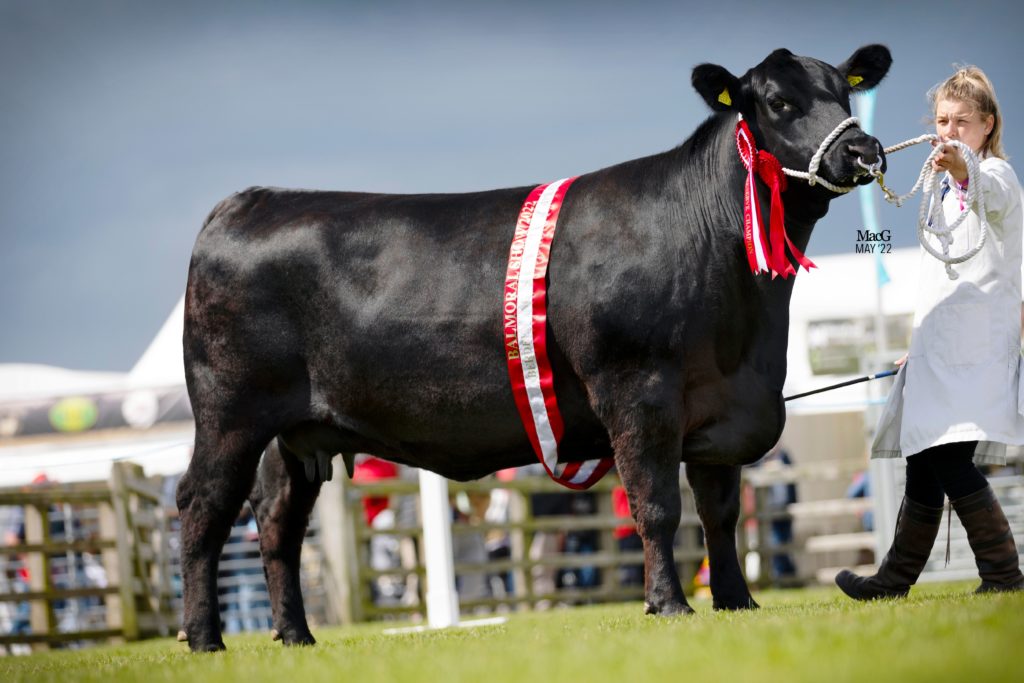 By the AI sire Blelack Duke J262, the reserve champion is out of the home-bred Drumcorn Lady Ida M895. She was shown with her February-born heifer calf at foot. The calf is one of the first progeny from the herd’s 4,000gns stock bull Solitude Elite V777 ET, himself a first prize winner at the 2022 show.

Now in its thirtieth year, the Drumcorn prefix has exhibited cattle at twenty-eight consecutive Royal Ulster Agricultural Society shows. This was its sixth reserve breed championship at Balmoral. 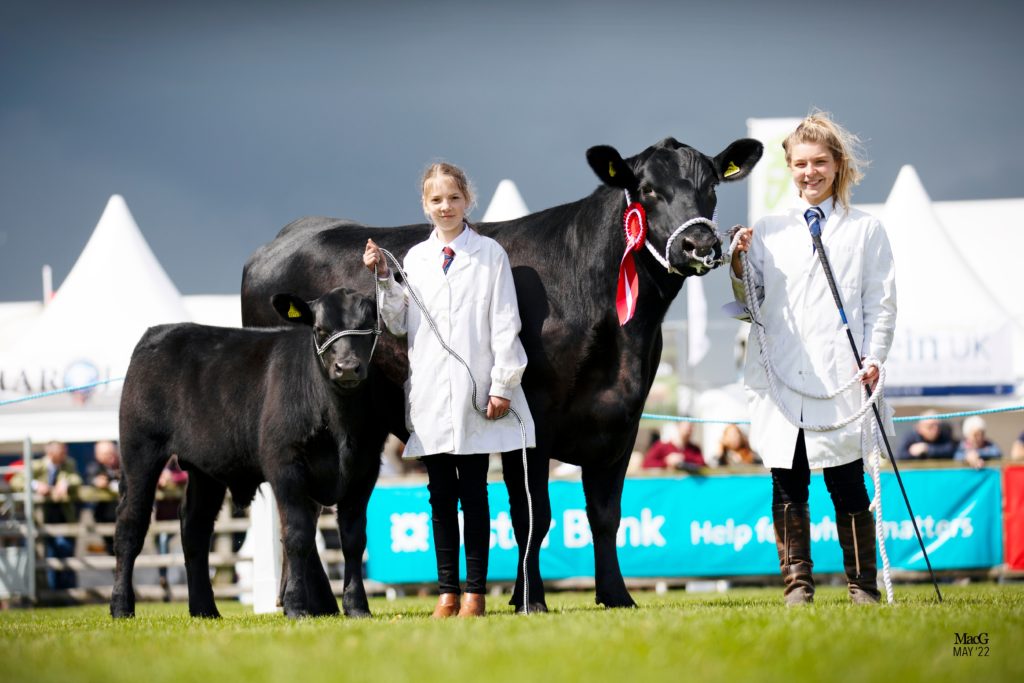 The winner of the junior cow class was Drumcorn Lady Ida V665 bred by John and Ann Henning, and exhibited by Izzy O’Dowd and Ruth Hamill.

First-time exhibitors William and Jane Dodd, and sons Jamie and Lewis, from Saintfield, won the reserve junior and best of opposite sex to the champion awards with the home-bred Glenbrae Red Maverick X164. 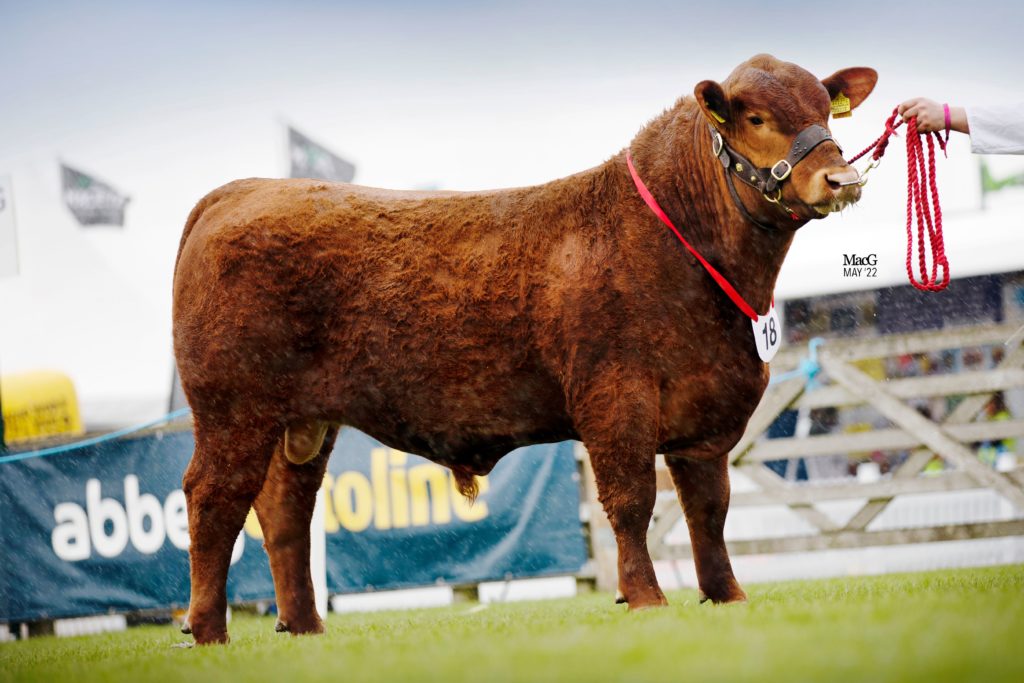 Best of opposite sex to the champion was Glenbrae Red Maverick X164 exhibited by William and Jane Dodd, Saintfield.

This fourteen-month-old bull was sired by Mosshall Red Evolution P353, and is out of the Scottish-bred Gannon Red Mary S654, one of 15 pedigree cows in the herd founded in 2012. 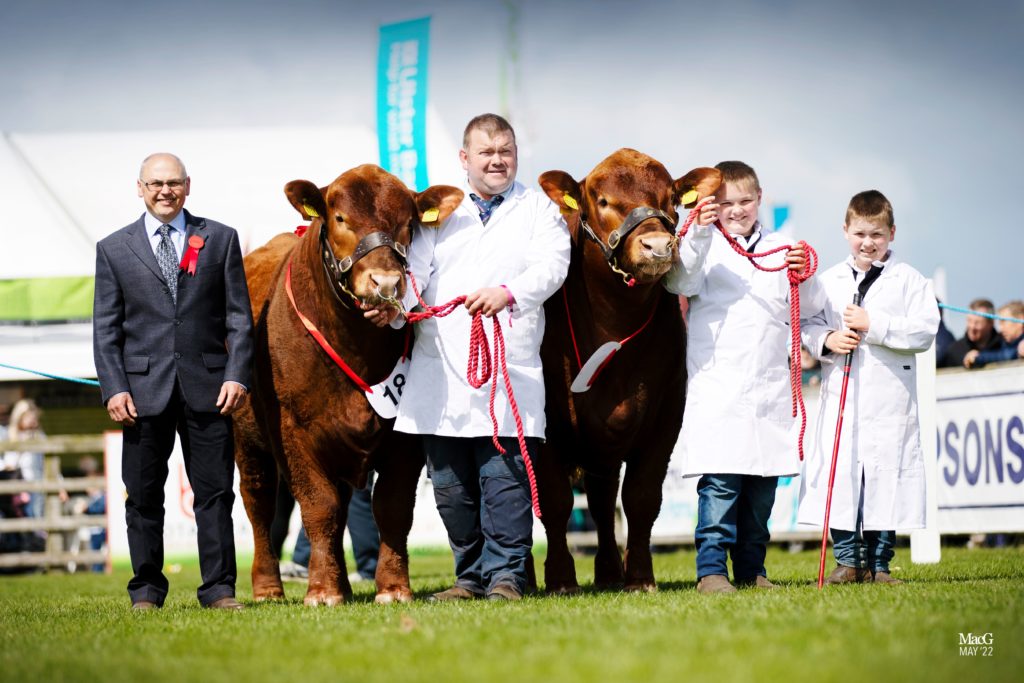 Neville and Ivan Forsythe, Moneymore, secured the Thompson’s award for the best pair of heifers. The winners were Coltrim Lady Jane X585 and Coltrim Jemma Erica X633, April and May 2021 daughters of Coltrim Javier Eric U911. 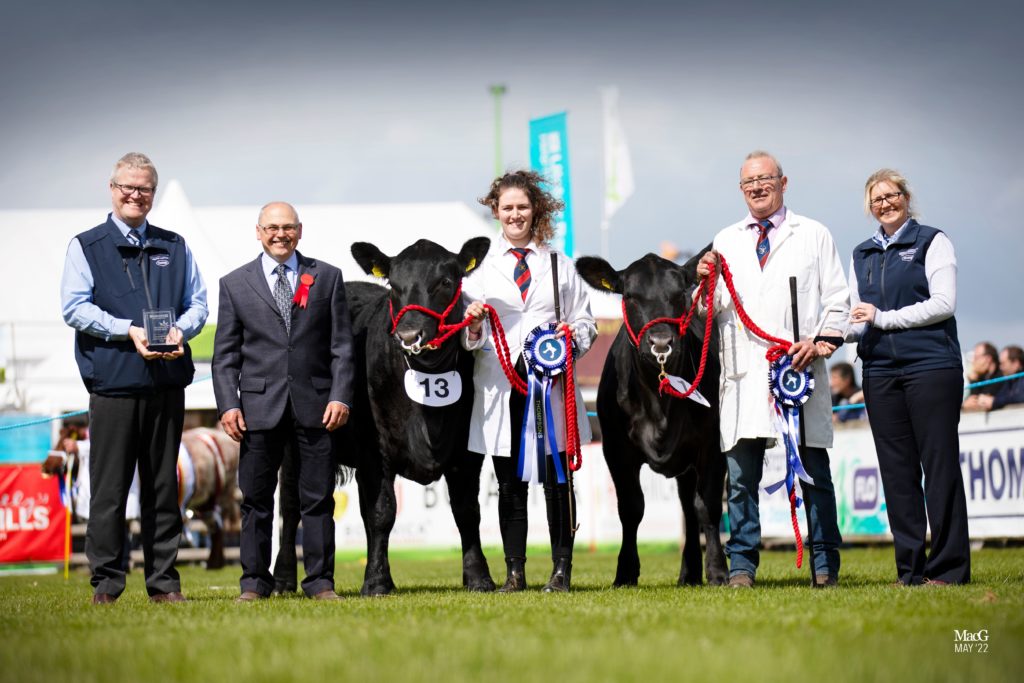 Award for the junior champion: Alwyn and Carol Armour and Sons. Reserve: William and Jane Dodd.

Drumlister Trophy for the best animal of opposite sex to the champion: William and Jane Dodd.

Thompsons Crystal Trophy for the best pair of heifers: Neville and Ivan Forsythe.