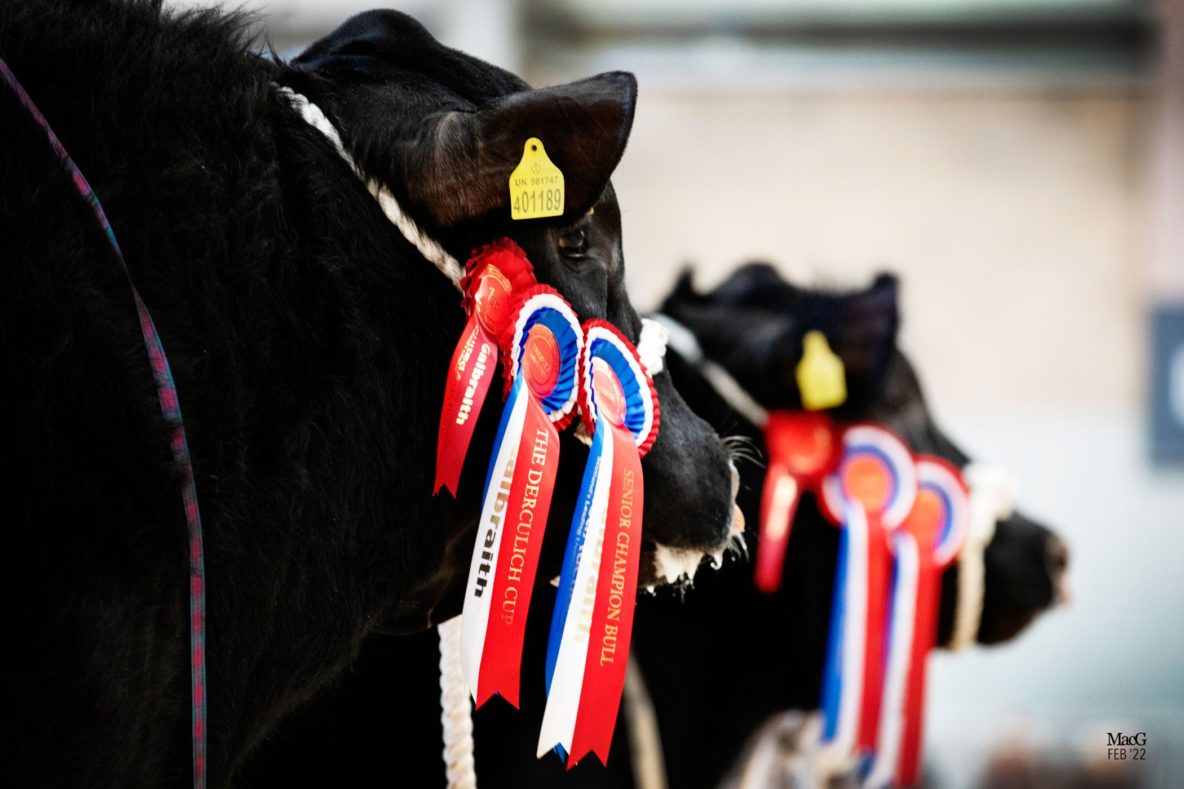 Topping the day at 38,000gns was Lot 102, Blelack Dean Martin W063 from the Massie family at Blelack. One of the last Blelack animals to sell after the herd dispersed in October 2021, May 2020 born Dean Martin is a rising star out of Kilmaluag Eriskay T203 and by a home bred cow, Blelack Diamond Mist U908 a sister of Blelack Dual Mine U913. Eriskay also sired several of the top lots in the October sale. Dean Martin stood 1st in his class in the show on Sunday before going on to take Intermediate Champion. He heads to his new home in the Scottish Borders with the Tilson family at Wedderlie. 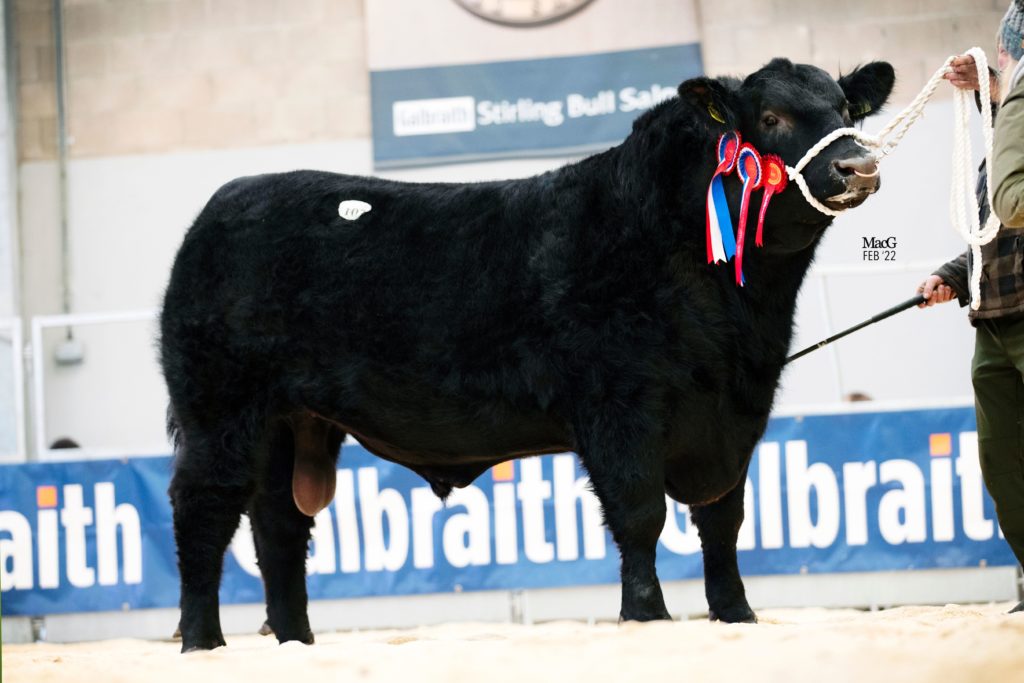 Second top price also broke the previous centre record with a call of 30000 guineas for Lot 57, Duncanziemere Jacobite W374 from the Clark family at Cumnock. Jacobite sold in a two-way split to the Ballindalloch and Idvies herds. Jacobite had already had a good day in the show ring on Sunday coming both 1st in his class and Reserve Senior Champion. Jacobite is an April 2020 son out of the 13000 guinea Auchincrieve Exodus U285 and by Duncanziemere Jody P108. Jody P108 herself comes from show winners, with her sire being the 2014 Highland Show champion, Rawburn Jester Eric J034 and her dam being Duncanziemere Jody D147, the 2006 Highland Show Champion. 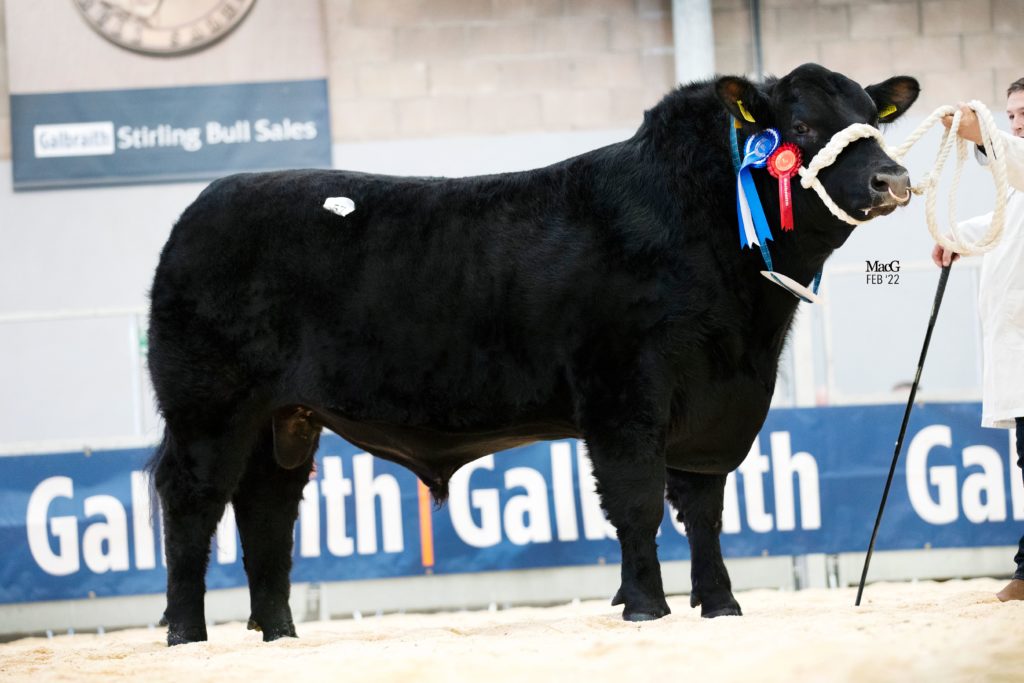 Third top at 16 000 guineas stood Lot 114, Alistair and Graeme Fraser’s Idvies Pink Prodigy W979. A May 2020 born son of Thrunton Panther S922 and by Idvies Pink Poppy P648, Pink Prodigy comes from the same line as the 8000 guinea Idvies Pink Parson who sold to Germany and Idvies Pinky Petal who sold to 9000 guineas at the Angus Fever sale in Carlisle last year. He stays locally after being bought by Robbie Galloway for his Cardona herd. 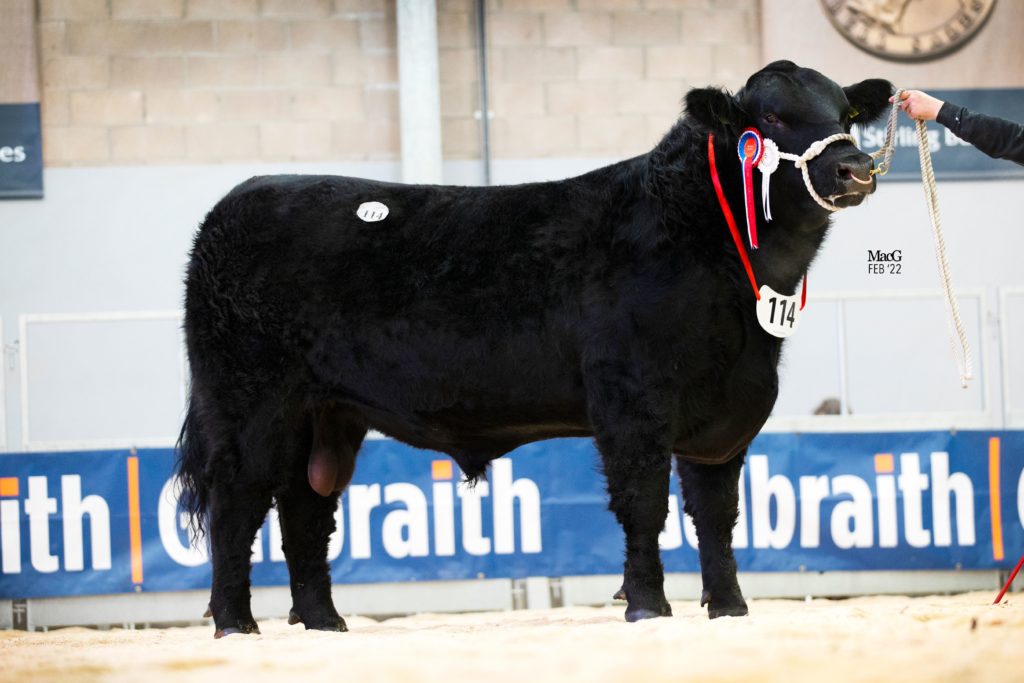 Realising another 5-figure sum was the Wattie family’s Lot 126, Tonley Potter W759 a July 2020 born son of Tonley Jester Eric S318 who has bred the family several show winners and from Tonley Princess M866. On Sunday, Potter stood 2nd in his class. Potter sold for 13 000 guineas to Daniel Whiteford for his Borewell herd at Scremerston in the Scottish Borders. 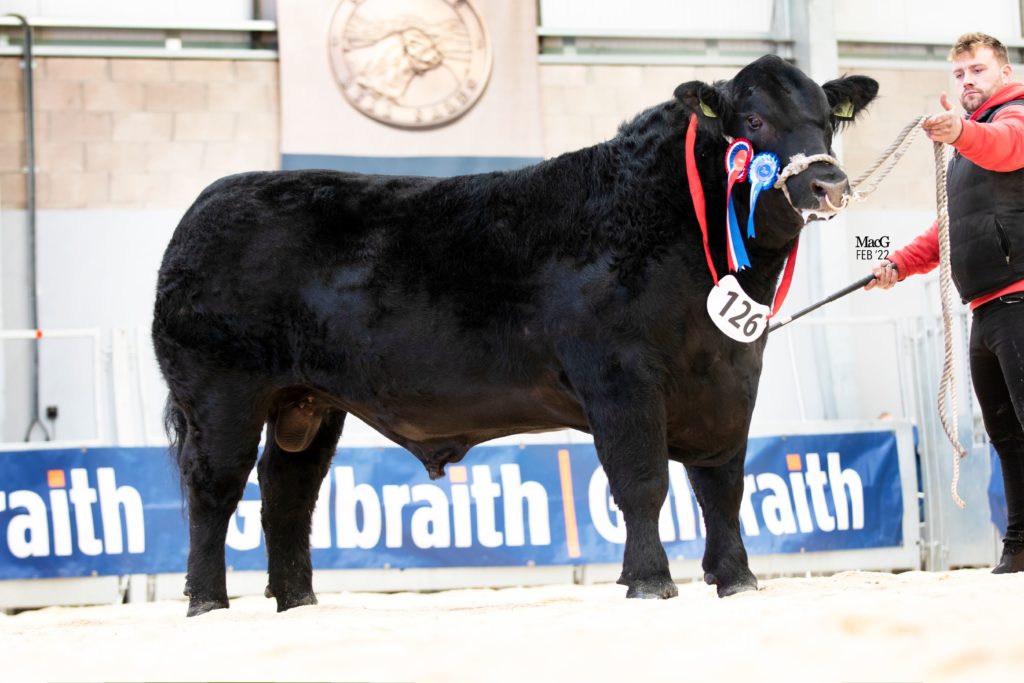 Following this was Lot 84 from Owen Tunney’s Morpheus herd with Morpheus Kodiak W068 realising 12 000 guineas to Norbreck Genetics. Kodiak is an AI sired April 2022 born bull by the $200 000 HF Alcatraz 60F and out of The Moss Krispy Girl N221. 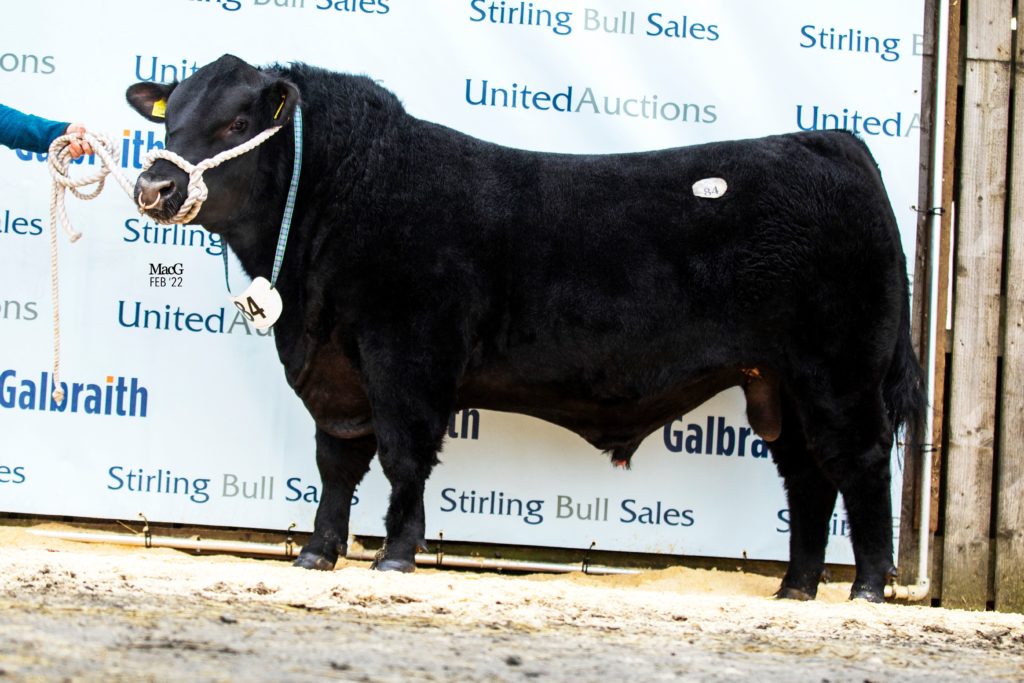 Going for 11 500 guineas was Lot 148, Sunday’s overall Reserve and Junior Champion, the Wattie’s Tonley Alba W781. Alba is an August 2020 born bull by Tonley Royal Legend T474 a Rawburn Elysium son and out of Tonley Annie P025. Alba heads to Devon to join the Luxtons herd on the edge of Dartmoor. 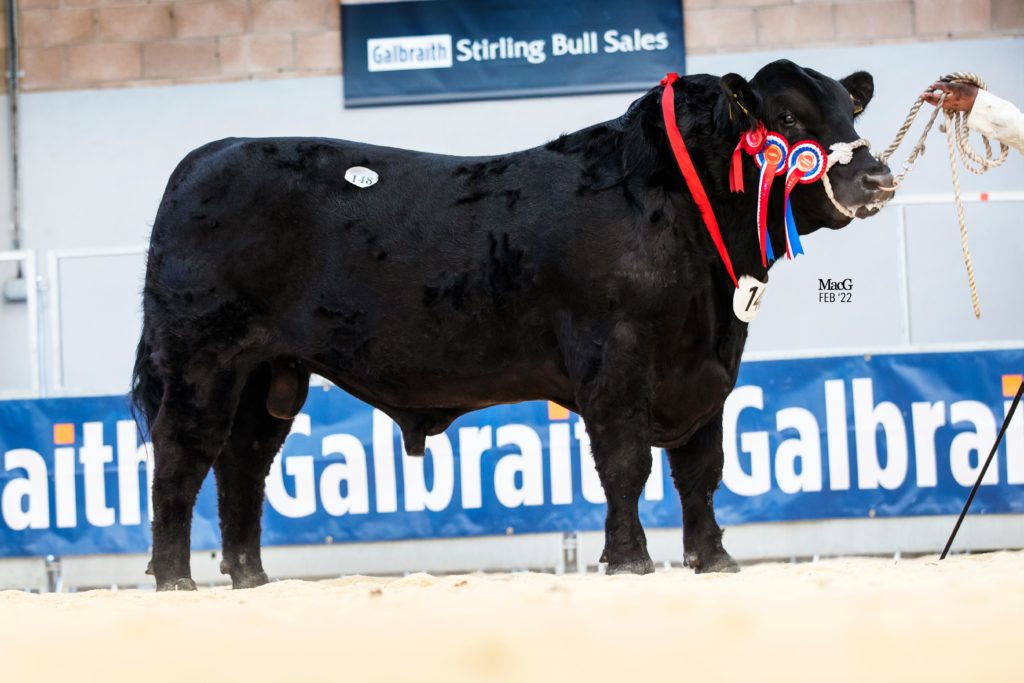 Adding to their already good day, the Clark’s saw a second bull make a five-figure call with Lot 91, Duncanziemere Mr Bond W388 going for 11,000gns. Mr Bond is a son of Duncaziemere Miss Belinda S213 and is also by Auchincrieve Exodus U285. Mr Bond heads north to Sutherland to join the Henderson’s Culrain herd. Mr Bond also stood 3rd in his class in the show ring on Sunday. 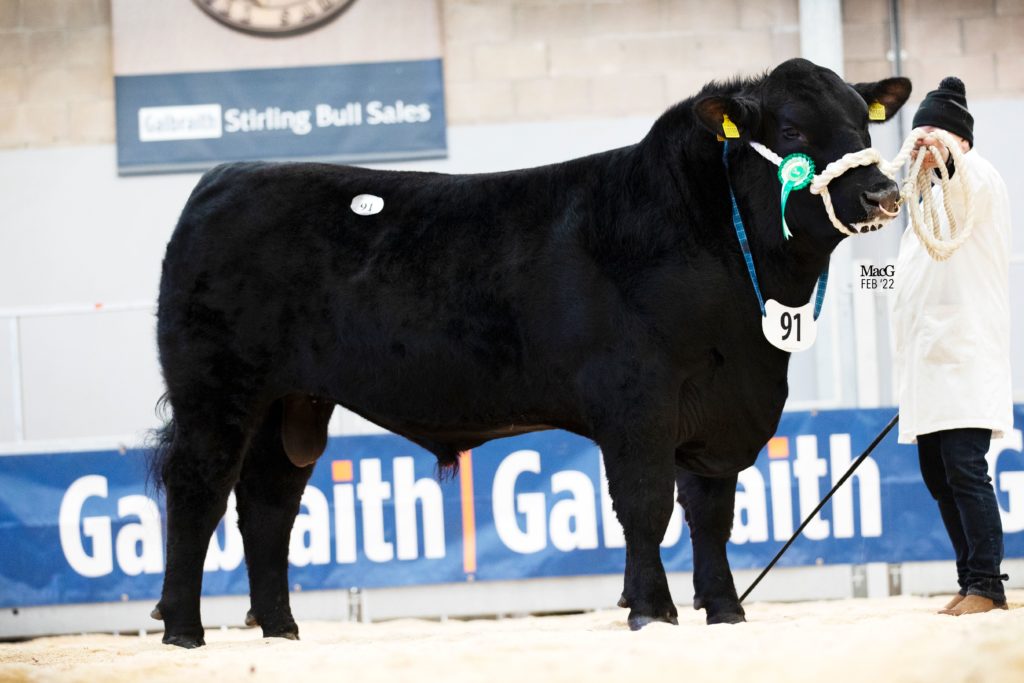 Sunday’s Senior and Overall champion was Lot 22, the March 2020 born Gretnahouse Blacksoap W189 was next up at 10,000gns. As their first Stirling Aberdeen-Angus champion, it was a poignant victory for the Houston family after the sad loss of Alasdair last year. As a flush sibling to the 10500 guinea Gretnahouse Blackpot P685, Blacksoap is a son of Blelack Blackbird and by Gretnahouse Blacksmith. Blacksoap heads to Midlothian after being bought by Mark Ross for the Roscoe herd. 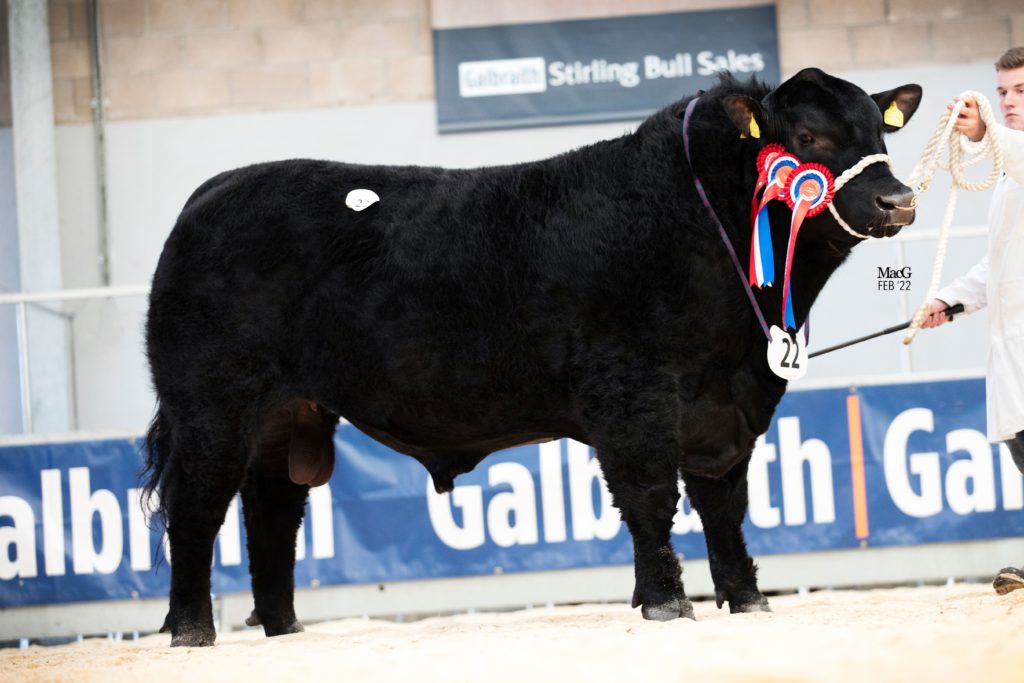 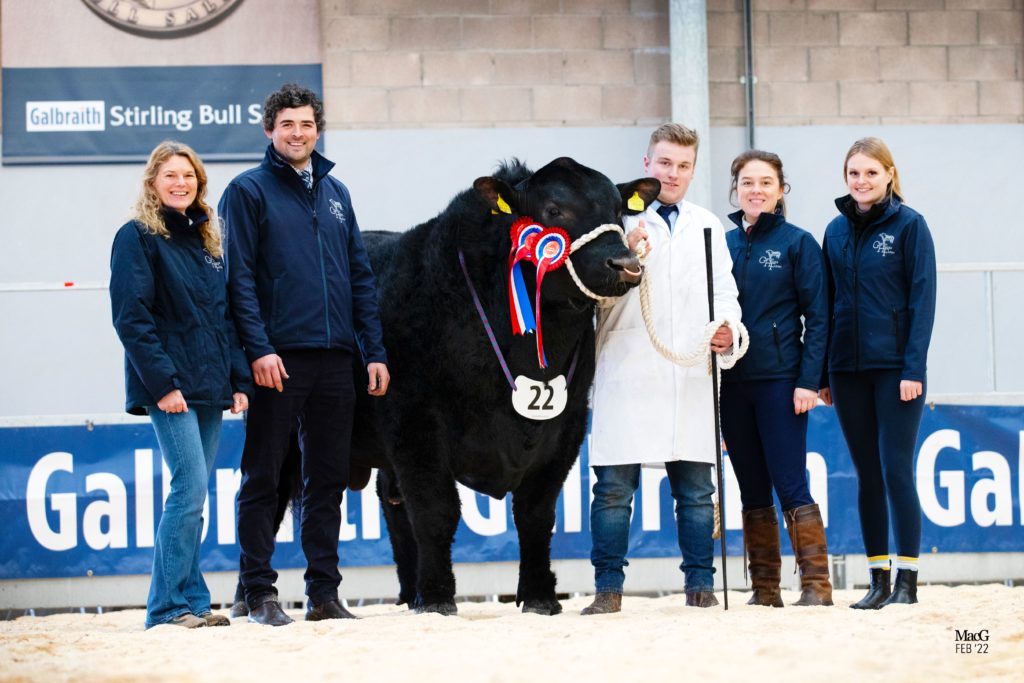 A further two lots reached 10 000 guineas with the first being Lot 109, Eastfield Black Banjo W508 from Ewan Brewis and family at Lempitlaw. Black Banjo is a May 2020 son of the family’s 2019 25,000 guinea top price purchase Linton Gilbertines Elgin T149 and out of Eastfield Blackbird K157. 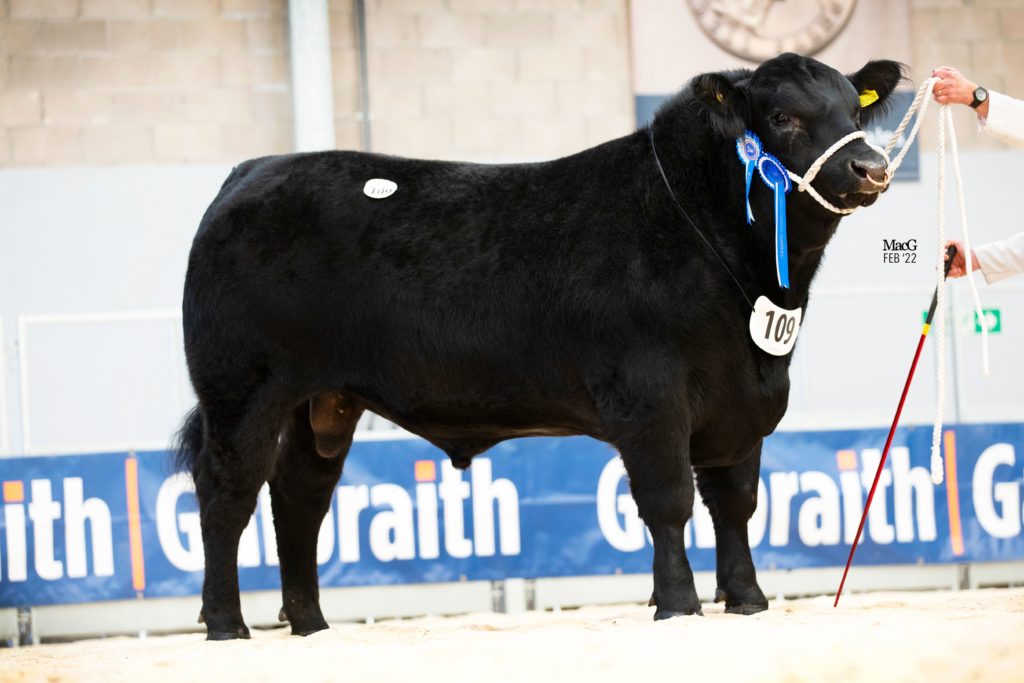 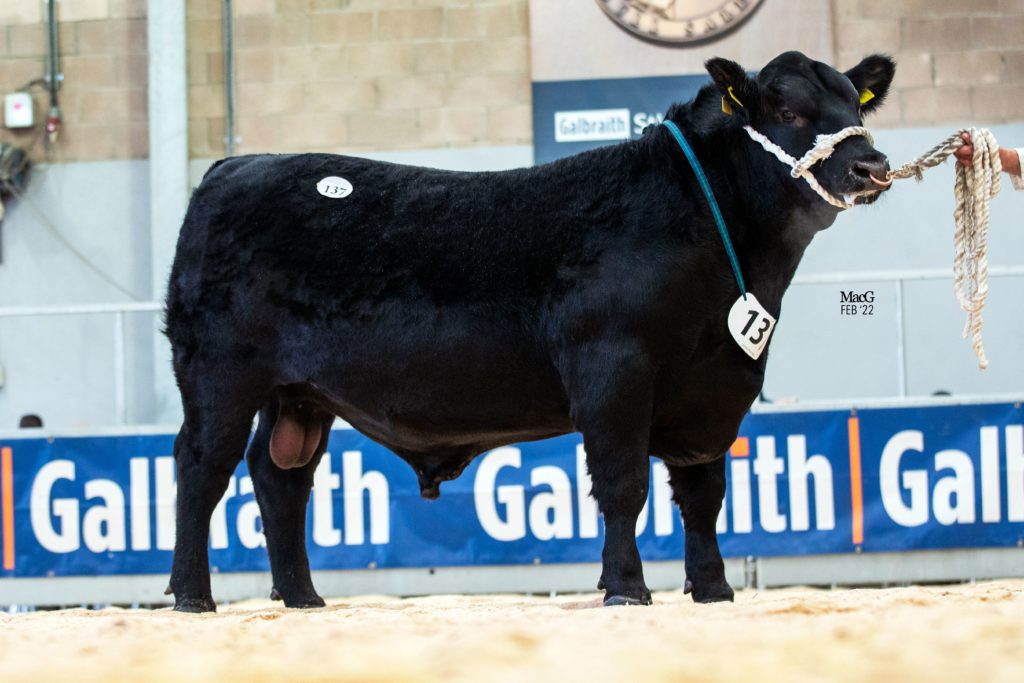 Mosston Muir Ivy X419 a March 2021 born heifer by Balmachie Ranald T223 not only stood Female champion Ivy also received the best heifer born on or after the 1st January of the previous year sash which is presented by William McLaren, Netherton. Ivy’s success didn’t end there she sold on Monday to R D Shackleton from the Duxbury herd for 2,250gns. 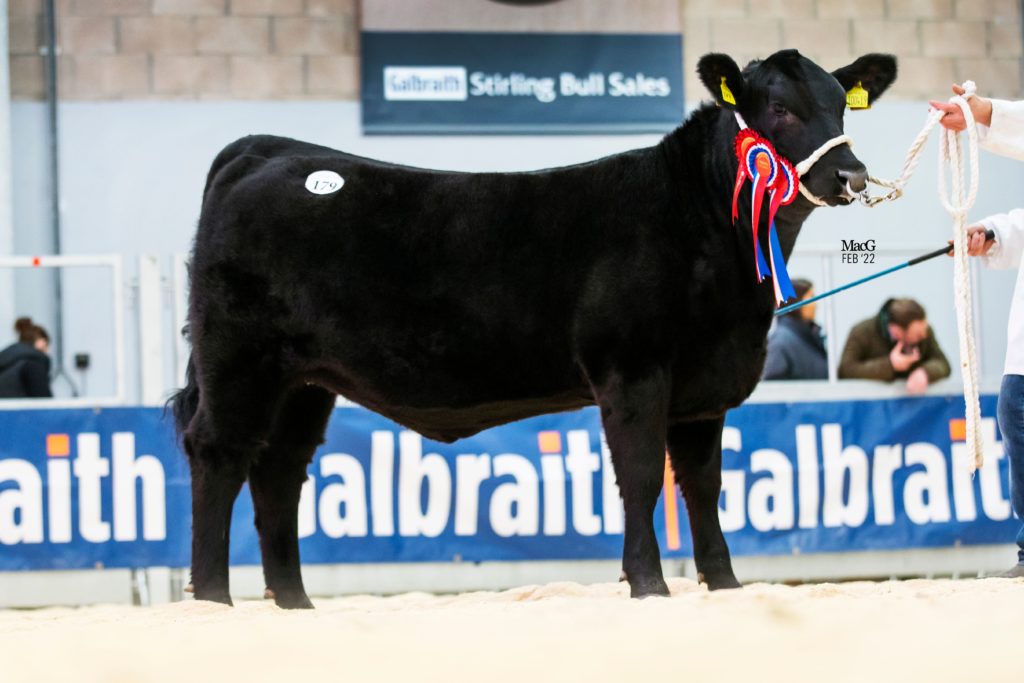 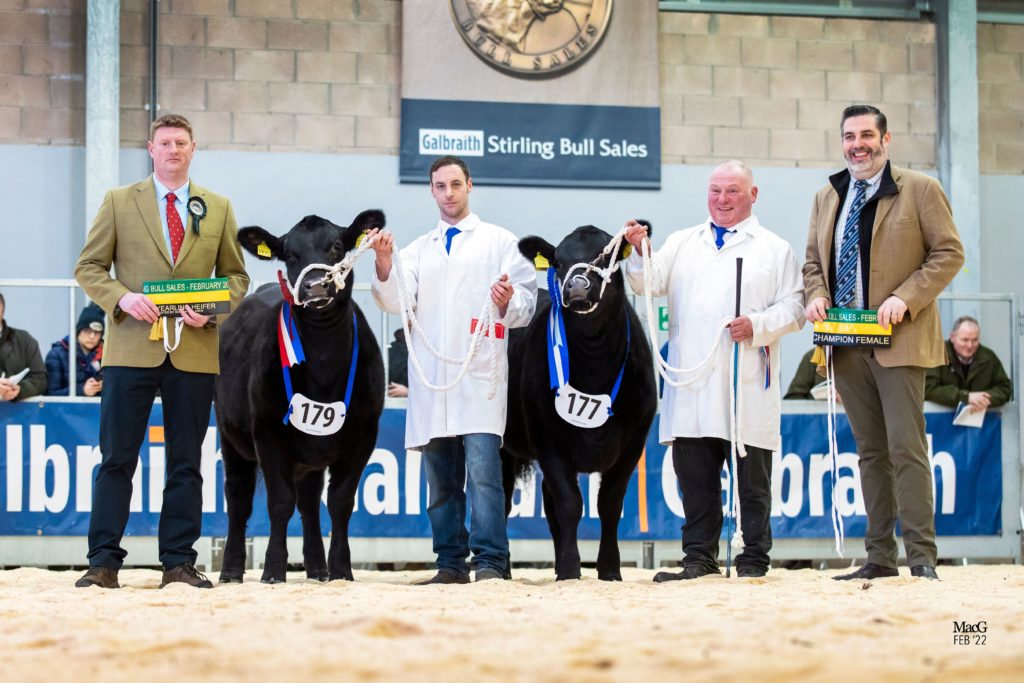 Sunday’s judge was experienced breeder and judge John Elliot of the Rawburn herd from Kelso. John is seen below receiving the customary judge’s rose bowl to mark the occasion from the Society’s Acting Chief Executive Robert Gilchrist. 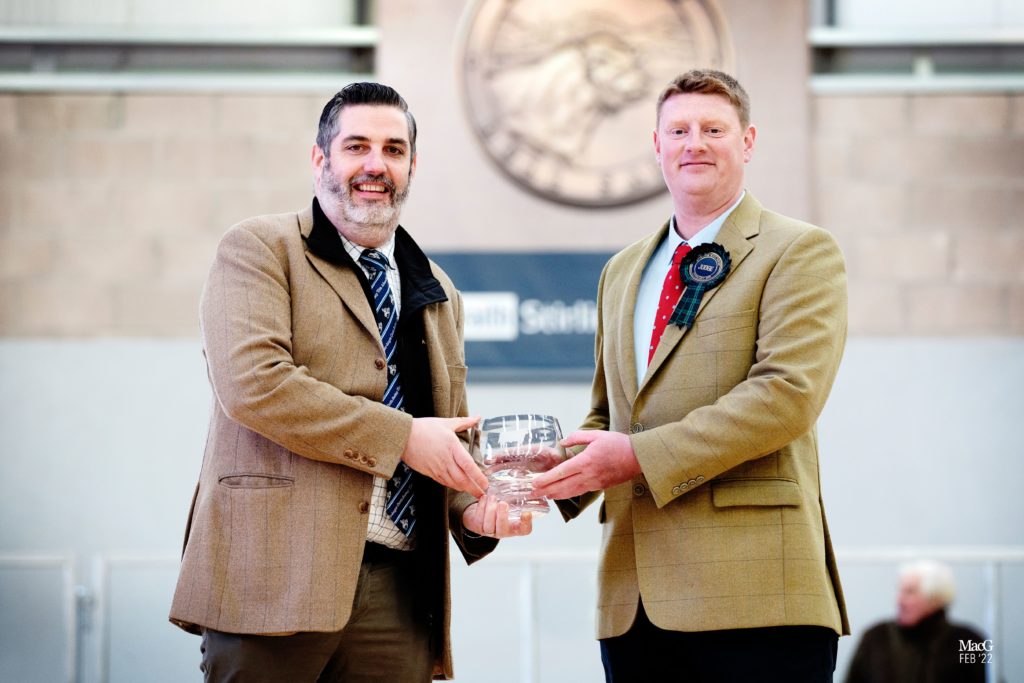 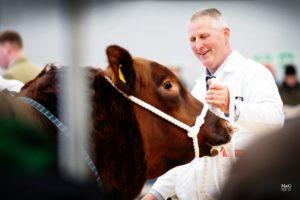 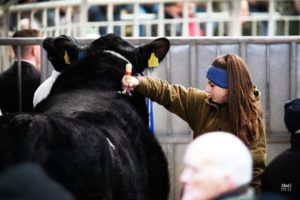 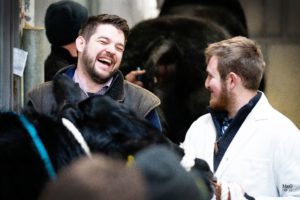 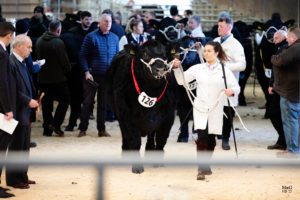 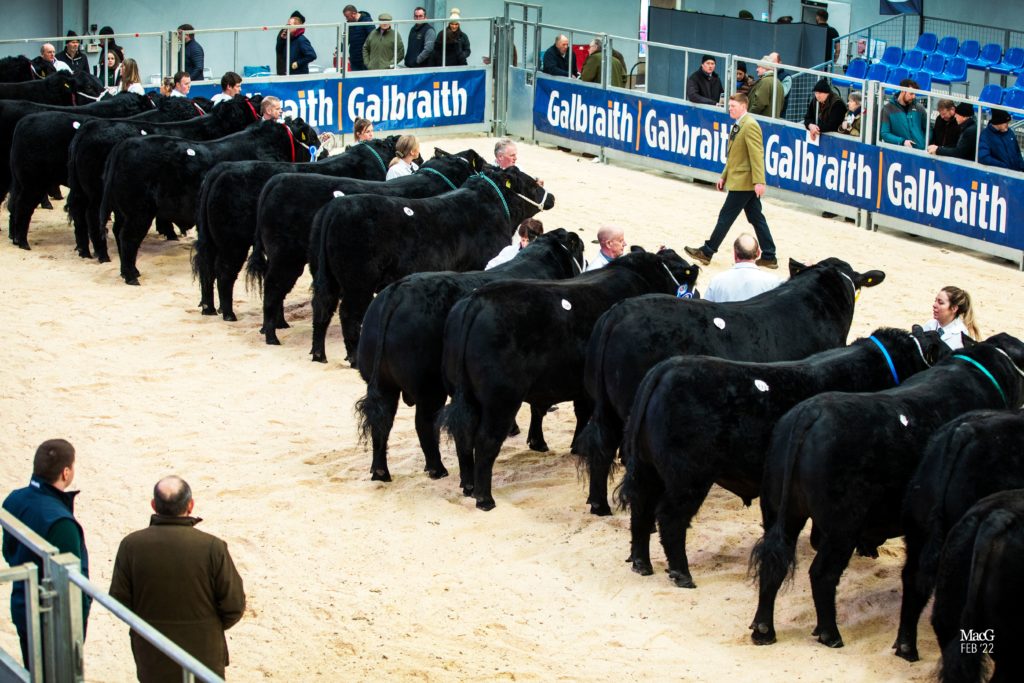 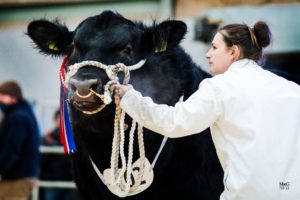 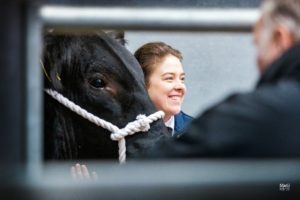 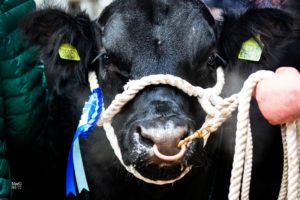 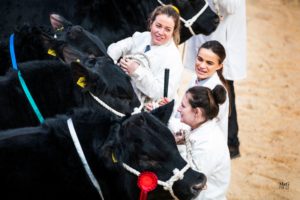