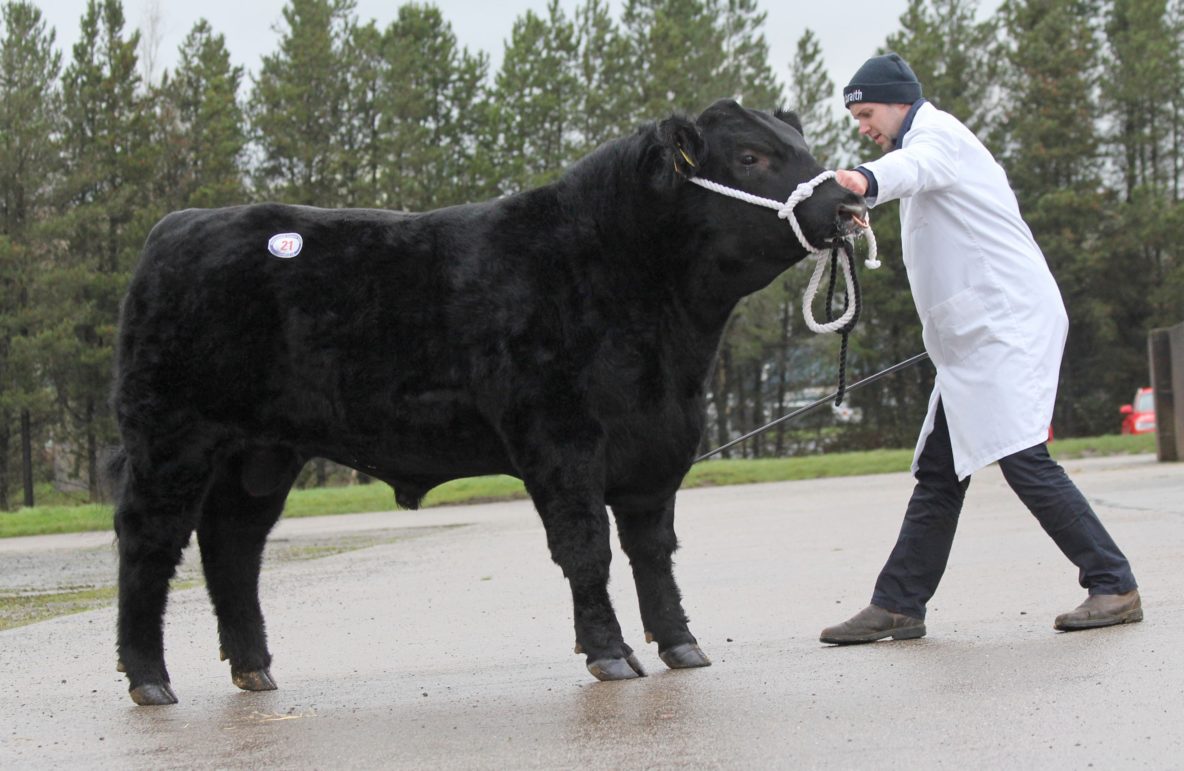 There was a strong demand for pedigree Aberdeen Angus bulls at the breed society’s December show and sale, hosted by Dungannon Farmers’ Mart.

Prices reached a ceiling of 4,400gns twice, with auctioneer Trevor Wylie confirming that ten bulls sold to average £3,570 per head – an increase of £1,024 on this time last year when four lots levelled at £2,546. 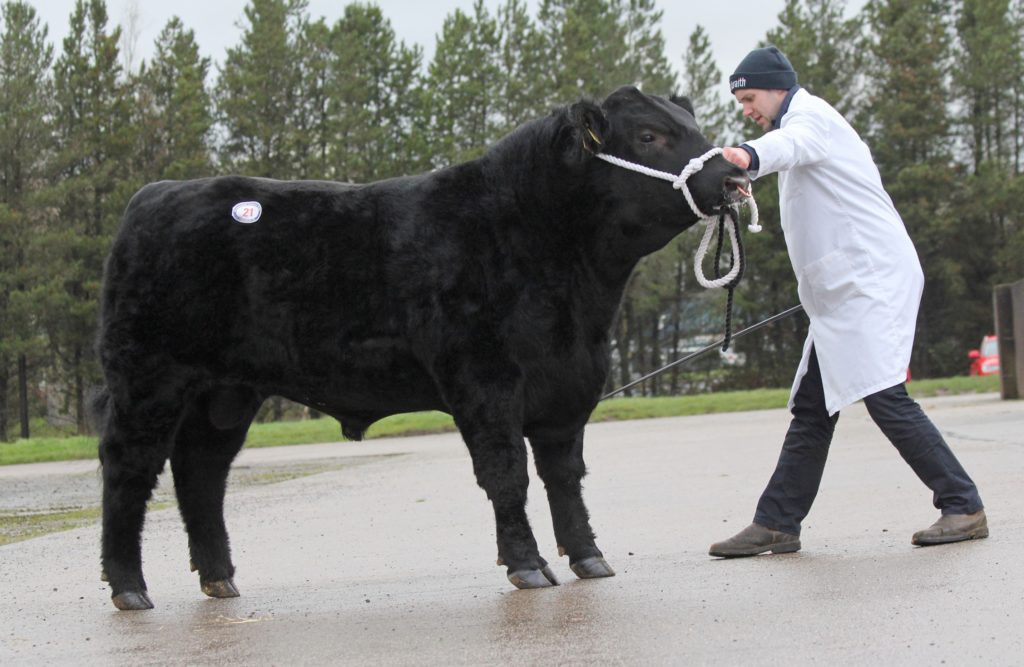 Supreme champion and joint sale leader at 4,400gns was the sixteen-month-old Tynan Charles W071 bred by Andrew and Zara Clarke.

First-time exhibitors Andrew and Zara Clarke from Tynan, County Armagh, had a day to remember, clinching the supreme championship award and a joint top bid of 4,400gns. The August 2020 born Tynan Charles W071 TSI 44 SRI 60 was the youngest bull in the catalogue, and is bred from the herd’s sole cow, Drumgar Lodge Corona U203 – bought privately in 2019 from neighbouring pedigree breeder Brian Anderson.

Tynan Charles is one of the first sons of the Rawburn Boss Hogg N630 son, Elliot Bravo T452 to sell at auction. Scottish-bred Elliot Bravo is ranked in Breedplan’s top one percent of the breed for milk +32, terminal sire index 55 and self-replacing index 80. He was purchased by the Foyle Food Group for its High Genetic Sire Scheme, an initiative aimed at encouraging Aberdeen Angus Quality Beef Ltd producers to use superior genetics. Semen is available to AAQB members in Northern Ireland.

The pre-sale show was judged by Alwyn Armour from the Woodvale Herd in Dromara, County Down. “The champion caught my eye. He is a good bull with breed character, well-grown for his age, and walks well on sound feet and legs.” Tynan Charles was snapped up by James Thompson from Culmore, County Londonderry. 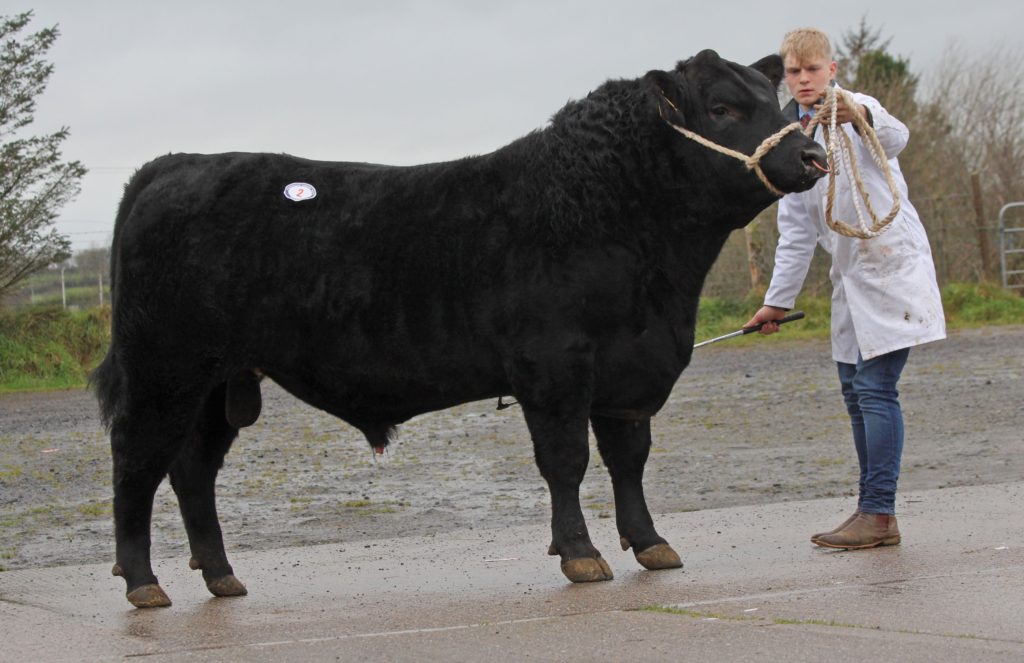 Also on Mr Thompson’s shopping list at 4,400gns was the third placed Loughans Moaning W591 TSI 34 SRI 44 bred by former Ulster and Irish rugby ace Rory Best, and his father John, who run a 60-cow herd at Poyntzpass. Born in March 2020, he was sired by the Rawburn Boss Hogg N630 son, Rawburn Jagger Eric R094, and is out of a home-bred dam by Prospect Lord Jake M412. This bull won the junior and reserve male championships at Balmoral Show in September, and was placed third in his class at the Dungannon sale.

The father and son team of Neville and Ivan Forsythe, Moneymore, sold three bulls from their long-established Coltrim prefix to average £3,675 each. Leading the Coltrim offering at 3,700gns was the reserve supreme champion Coltrim Ellipse W272 TSI 39 SRI 46. Sired by former stock bull Schivas Captain Black U656, this March 2020 born entry was bred from the Curragh David J513 daughter, Coltrim Evana N625 – one of 32 cows in the herd, awarded third place in the large herd section of the NI Club’s annual competition. Coltrim Ellipse W272 was Bull Calf of the Year in the 2020 herd competition, and sold to Alan Watson from Cookstown. 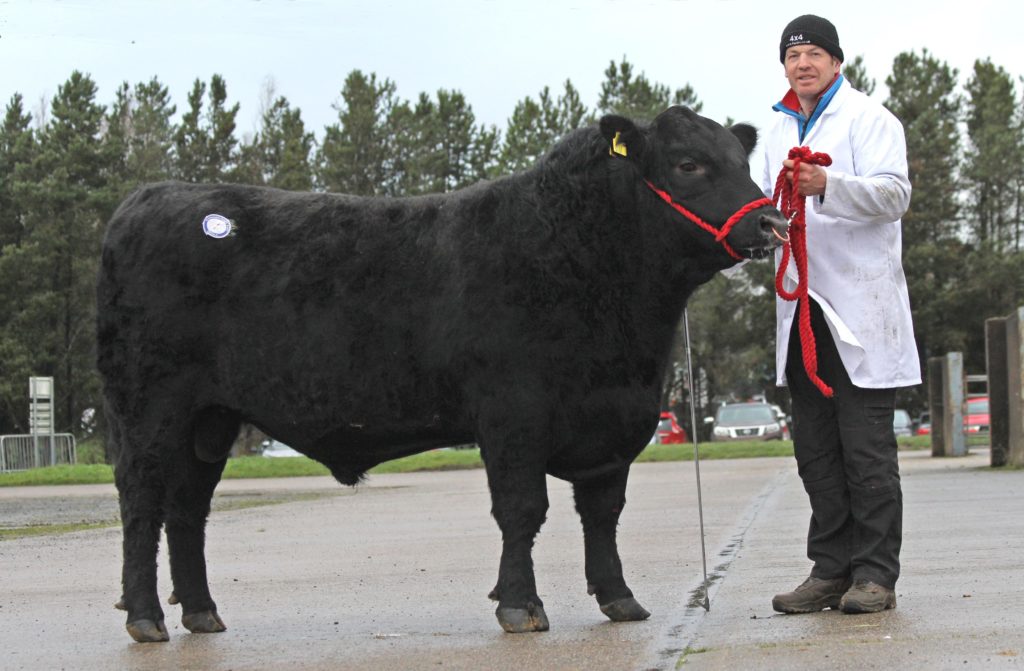 Next best at 3,600gns was the fourth placed Island Farm Faro W611 bred by Cookstown herd owner Kevin McOscar, who sold three bulls to average £3,010 each. Born in January 2020, Faro was sired by Rawburn Bannockburn T628, and is bred from the privately purchased Rawburn Felicia T496 – one of 30 cows in the County Tyrone-based herd. Ranked in the breed’s top one percent for terminal sire index 57, and self-replacing index 71, he was bought by Harry Wilson from Victoria Bridge, Strabane. 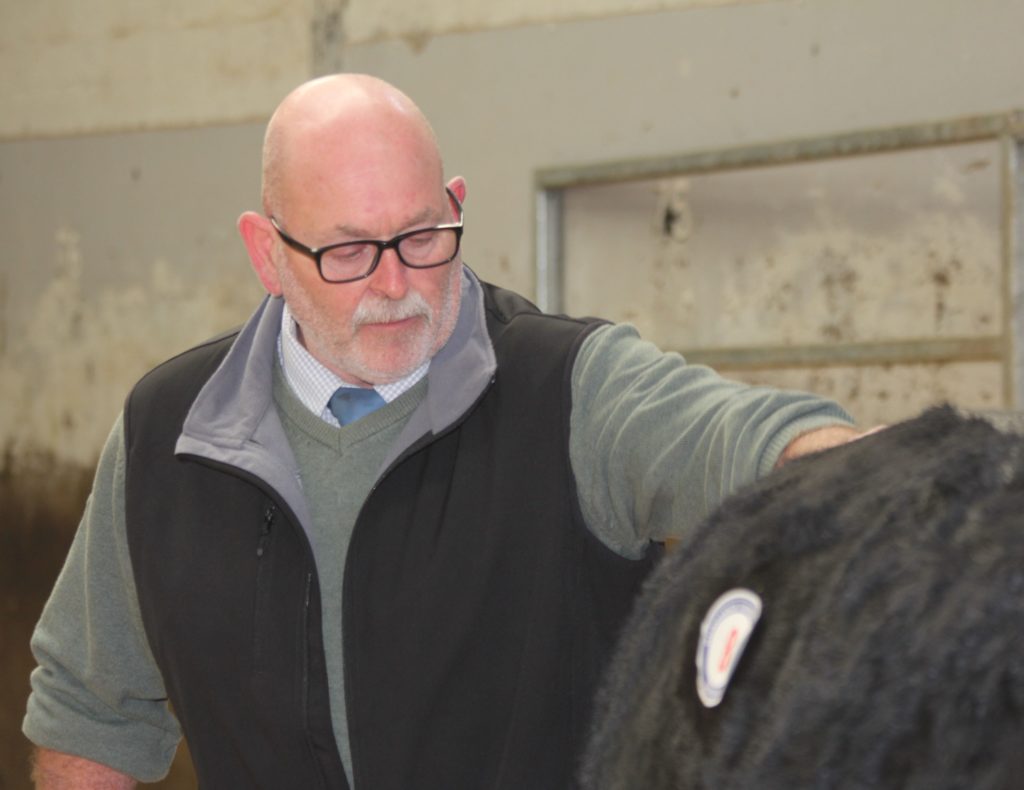 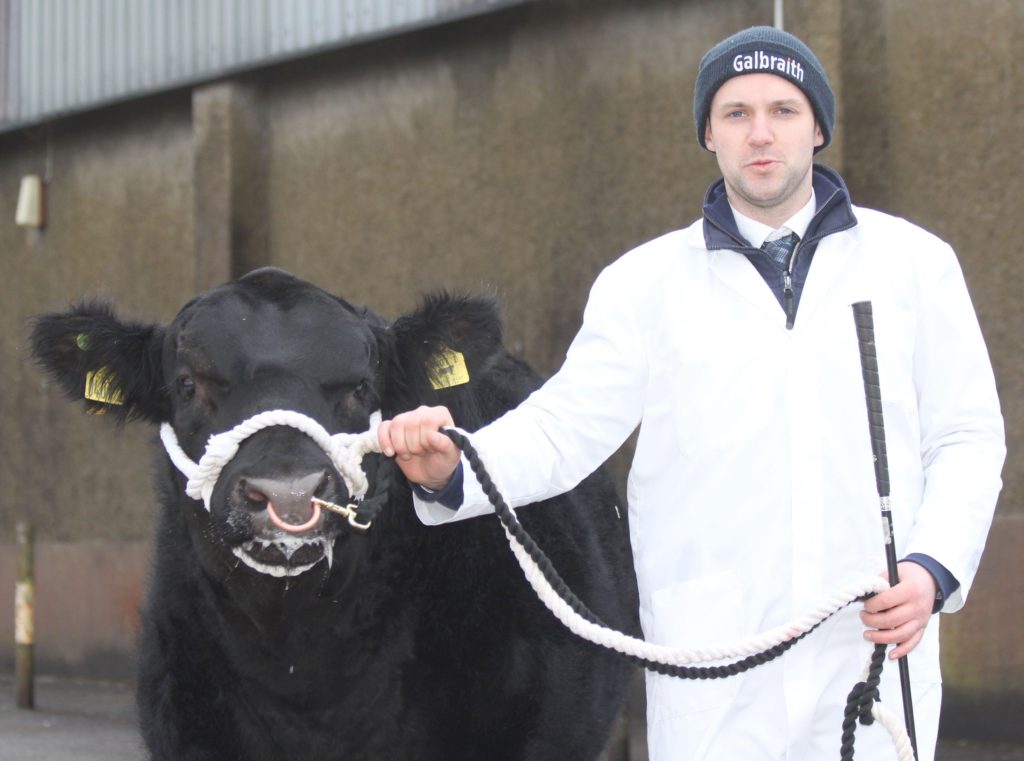 First-time Aberdeen Angus exhibitor Andrew Clarke, Tynan, with his supreme champion at the Native Breeds show and sale in Dungannon 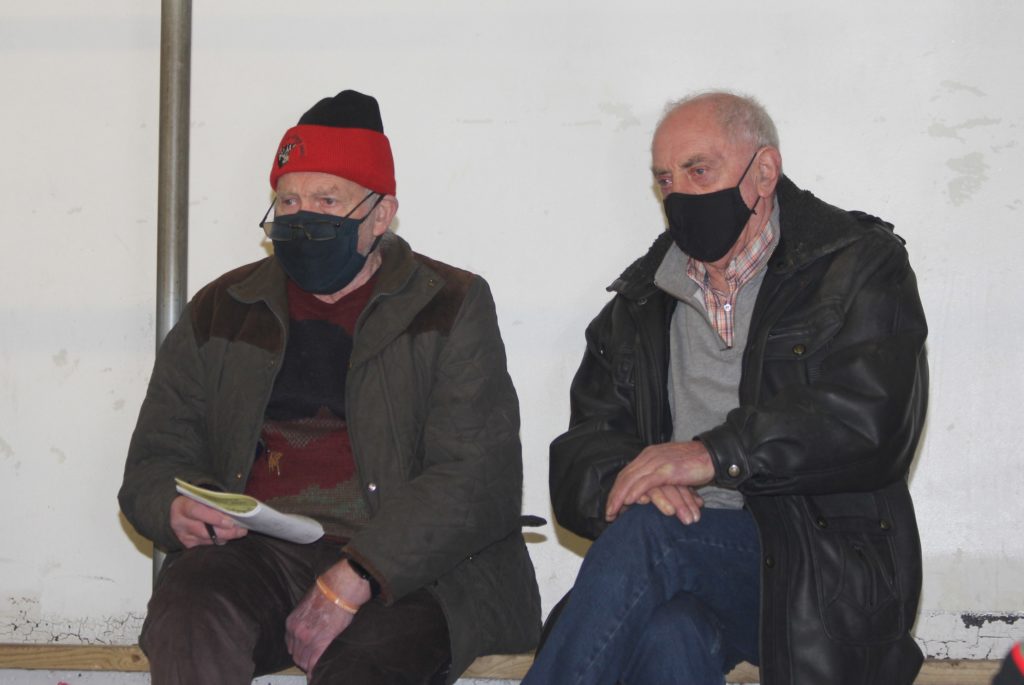 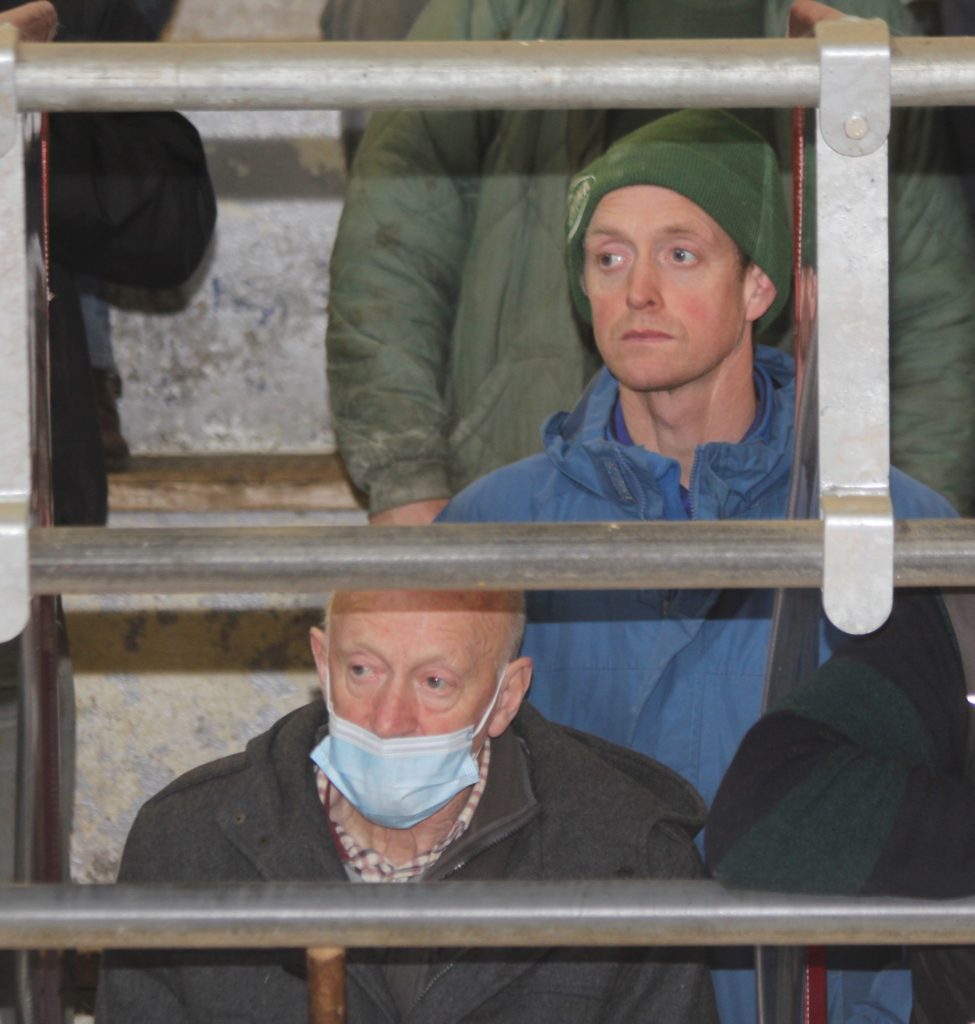 Moses Irwin, and son Moses, from Fintona, keeping an eye on Aberdeen Angus trade at the native breeds show and sale in Dungannon