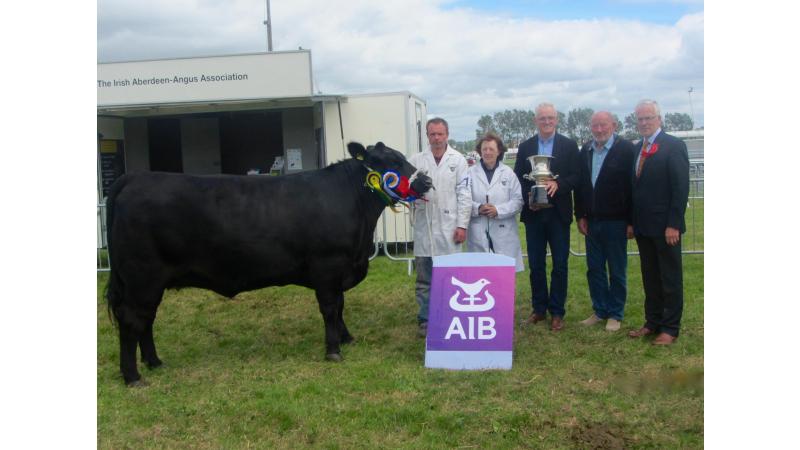 Longtime Aberdeen-Angus breeder and one of the most well-respected figures in agricultural circles, John Henning of Maghaberry, Moira, Co. Armagh, Northern Ireland has been named as a recipient of the Officer of the Most Excellent Order of the British Empire (OBE) in the Her Majesty, Queen Elizabeth II’s New Year’s Honours List for 2019.

John, alongside his wife Ann, founded the Drumcorn Aberdeen-Angus herd in 1992 and the modus operandi for this select pedigree herd has always been ‘quality over quantity’, with current cow numbers standing at 10 cows and followers. Despite their small numbers, the Drumcorn Aberdeen-Angus herd has always packed a mighty punch in the show ring, with Drumcorn Egghead J674 (Reserve Male Champion, Royal Ulster Show, Balmoral, May 2015), Drumcorn Lady Ida J663 (Exhibitor-Bred Champion, Royal Ulster Show, Balmoral, May 2010) and Drumcorn Lady Ida S282 & Drumcorn Ergessa S304 (Reserve Best Pair, Royal Ulster Show, Balmoral, May 2018) some of their most recent high-profile wins. The Drumcorn Aberdeen-Angus Herd has also claimed breed championships at all of the other major shows on the Northern Ireland show circuit as well as securing prizes at several editions of the All-Ireland Aberdeen-Angus championships and claiming the annual Ulster Provincial Trophy multiple times too.

In addition to his breeding endeavours at Drumcorn, John started his agricultural career at Northern Bank / Danske Bank in the late 1970’s and specialized in the agricultural sector of the bank that dealt exclusively with farmers and agri-businesses. By 2011, he had been appointed Head of Agricultural Relations at the bank and held key responsibility for a total portfolio of 150 farming and agri customers across several counties in Northern Ireland. In addition to his career at Northern Bank / Danske Bank, John occupies a number of key positions in numerous very well-known agricultural agencies, most notably; Vice-President, Royal Ulster Agricultural Society, Chairman, AgriSearch, Non-Executive Director, Centre for Innovation Excellence in Livestock, Vice-Chairman, Countryside Services Ltd, Northern Ireland Chairman, Lantra, Governor, Royal Association of British Dairy Farmers, Trustee, Council for Awards of Royal Agricultural Societies and Past President & PRO, Ulster Grassland Society. On top of all of that, John also holds a life-long interest in Holstein dairy cattle and is a member of the Aberdeen-Angus Cattle Society’s official judging panel and has officiated at several major shows and sales across the UK and Northern Ireland in recent times.

It is clear that an OBE award is the richly-deserved, crowning glory to John’s distinguished, varied and extensive contribution to agriculture and the Irish Aberdeen-Angus Association and UK Aberdeen-Angus Cattle Society would like to extend their warmest congratulations to John and his family on this momentous achievement.

Photo caption: John Henning (pictured at the far right) after judging the Aberdeen-Angus section at the Cork Summer Show in June 2018.