The 21st Black Beauty Bonanza is on the horizon 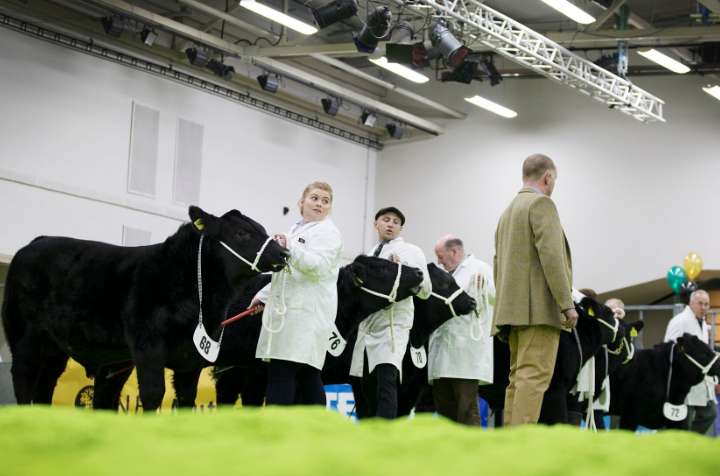 Coming up on Friday 22nd November at Thainstone Centre will be the highly anticipated 21st Black Beauty Bonanza show of Aberdeen-Angus calves and yearlings, with this year’s event sponsored by the Ballindalloch Estate in Banffshire, owner of the Ballindalloch Herd of Aberdeen-Angus. This year’s show will be judged by Dallas Allen, owner of the Stouphill Herd in Northumberland.

The event will also feature a young handlers competition which is primarily friendly competition with mutual assistance, both between the competitors and the adult experienced handlers passing on their knowledge and experience. The Junior section (ages 8 – 12) and Intermediate section (ages 13 – 17) have to brush up, parade and display their knowledge to the judge in the ring. However, the Seniors (ages 18 – 25) have two hours to dress an animal from scratch, and only then are they allowed to parade and display their animal. Prizes are very generous, with the senior winner receiving £200. Competitors do not need to be part of the Aberdeen-Angus Youth Development Programme, but it’s a great introduction to the Society’s flagship Youth Scheme.

The Black Beauty Bonanza was the brainchild of the North East Scotland Aberdeen-Angus breeders club. At the time of conception, the club had a lot of new herds and the idea was to encourage them to break a calf, which meant that they had a yearling ready for the following year’s summer shows. And it worked, with many of the proceeding local summer shows having very large numbers of Aberdeen-Angus cattle – all thanks to the Black Beauty Bonanza.

There have been many notable animals that first saw the public at Black Beauty Bonanza throughout the years. Among them was Skaill Delia, who had a very successful career being sold at 16,000gns to Bill Bruce’s Logie herd.  And coincidentally and more recently, the young bull Logie Politician, being a BBB champion and selling well. There have been many others, and suffice to say, many of the most successful Aberdeen-Angus cattle have come out of the North East of Scotland, and been shown at Black Beauty Bonanza.

The Black Beauty Bonanza is open to pure-bred Aberdeen-Angus yearlings and calves born after January 1, 2018, and registered in the Aberdeen-Angus Herd Book.  The closing date for entries was last Monday 28th October, and we have another excellent entry number for this week’s event. Judging of the classes on November 22nd starts at 11.00am.

This year’s event will also include a new herd competition for calves from exhibitors who are new to breeding and showing Aberdeen-Angus cattle. This class is open to all exhibitors who have 20 cows or less and have started breeding Aberdeen-Angus cattle in the past five years within the North-East Scotland club area. The hope is to encourage owners to make a start at showing.

We look forward to seeing many of you at Thainstone on the day for another successful Black Beauty Bonanza!