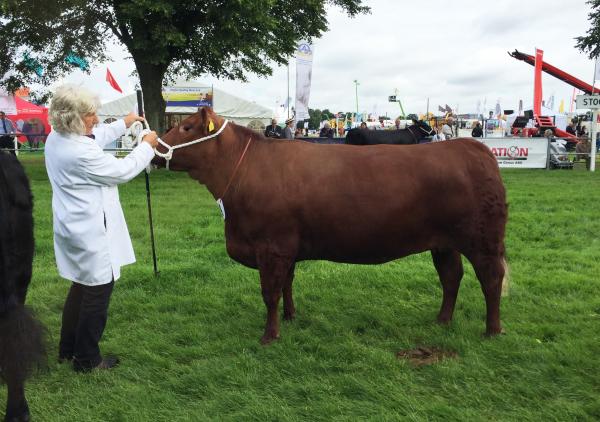 The Wickmere herd, owned by Tony and Phillida Hurn, from Beck Farm in Norfolk, has been recognised by AHDB Beef & Lamb as the most improved herd of Aberdeen-Angus cattle in England for 2016.

The award is presented by the AHDB Beef & Lamb Better Returns Programme (BRP) to the recorded herd that shows the greatest genetic gain for commercial characteristics over a 12-month period. There is a separate award for each of ten UK breeds.

Beck Farm in the heart of North Norfolk is situated in a conservation area near the river Bure. The farm is predominately arable land, but the water meadows are well-suited to livestock and their cattle enterprise has developed making use of this land.

The couple founded the Wickmere herd in 2003 and they have also increased the suckler herd which run alongside the pedigree herds, to some 100 cross-bred cows.

For the last 15 years, Tony has worked in partnership with his daughter Karen and son-in-law, Jonathan Seamen, with Jonathan managing the arable enterprise and Tony and Phillida managing the cattle enterprises with the help from their stock lady, Carol Fisk.

Altogether the herd is now comprised of 150 cows, with about 20 pedigree breeding cows in each of the Simmental and Aberdeen-Angus herds. The cross-bred cows run with their homebred Aberdeen-Angus and Simmental Bulls. All cattle are homebred with the exception of an occasional new stock bull purchase.

Tony and Phillida were encouraged towards Aberdeen-Angus cattle by Ruby Wright, who is a keen ambassador for the breed. Ruby worked with them as a young teenager and continued to show animals throughout her education. She joined Tony and Phillida after leaving college working full time until she moved to Yorkshire in 2014. Alongside Ruby’s endorsement, they were attracted to the breed for its renewed status, and in Tony’s opinion “it’s a modern breed with a large frame and quiet temperament.”

In 2003, Tony purchased three cows with heifer calves at foot and three in-calf cows from the Wedderlie herd to form his foundation herd, adding two more from the Shadwell herd at Perth’s 125th Anniversary Sale. Shadwell Belle, has proved to be very successful, producing nine calves to date, some of who remain in their herd.

Through the use of AI they have used a red bull on daughters of their own stock bull, Jerusalem Mr Bojangles. Their red heifer, Wickmere Red Wren, has been shown twice this summer, winning both times at the Royal Norfolk Show. Wickmere Red Warrior, sired by Netherton Figo, was used on Mr Bojangles daughters as well as the cross-bred cows and Simmental heifers.

Using performance figures to assist their breeding management decisions, their priority is to maintain easy calving to promote calves with good vigour and fast growth rates. Temperament is important and selected for within the herd. The Aberdeen-Angus do well foraging on the water meadows and tend to thrive without supplementary feeding. They are slower growing in comparison to the Simmental, but don’t eat as much and are making good crosses for their commercial herd. “Performance recording provides us with peace of mind that we continue to make progress with our herds,” said Phillida.

“Our customers are content that they are buying from a herd with clean health and easy-calving attributes. We use the breeding values to help us to make informed management decisions when looking to the future for the herd,” she concluded.

Tony and Phillida have worked hard to become known within the breed and find the shows to be a useful platform in which to meet people and learn more about the breed. Their herd maintains a high health status, which they are careful to protect.

The last stock bull, Gretnahouse Lord Hefty, was purchased in 2013 from Alistair Houston from Gretna Green. The first calf produced from this bull was champion at Carlisle this spring and sold for £8000.

Complimenting their arable enterprise, they calve in January continuing through to April. This avoids harvest time so labour is available. They start selecting finished animals as they approach 12 – 15 months, aiming for 650 – 700kg carcass weight. Typically, they sell five young bulls each year and many females are sold for breeding as in calf heifers.

Most sales are conducted as private farm sales to local commercial producers or to pedigree breeders through their own website, which is kept up to date with stock availability.

The Wickmere herd has won the herd competition for the East Anglian Aberdeen-Angus Club for four successive years. In addition, claiming prizes for best heifer born in 2015 and 2016, both sired by Lord Hefty.