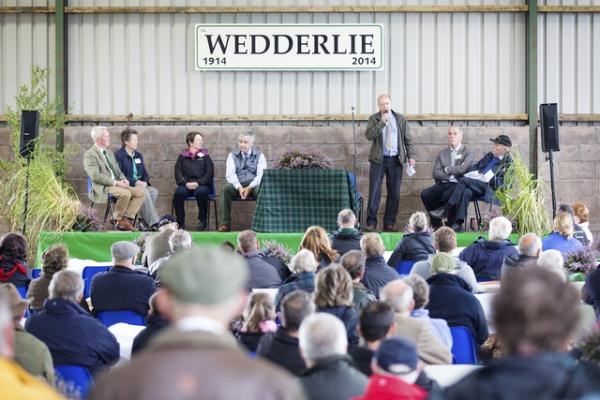 Scotland ‘s pedigree beef cattle breeders will have to up their game by adopting the latest genetic technology to ensure quality Scotch beef remains competitive in the market place, NFU Scotland president, Nigel Miller, has warned.

Part of the £45 million fund earmarked by the Scottish Government for beef improvement over the next three years should be used to develop genetic programmes to help commercial beef producers become more efficient, Mr Miller told more than 1000 beef farmers attending the centenary open day of the Wedderlie Aberdeen-Angus herd at Gordon, Berwickshire.

He praised herd owners, John and Marion Tilson, and daughter, Wanda Hobbs, for the way they had made good use of estimated breeding values (EBVs) to improve the performance of their 200-cow herd which is one of the top Aberdeen-Angus herds in the country.

“The Wedderlie herd is showing the way by incorporating all available technology into their breeding programme, with an emphasis on maternal EBVs, to produce commercial cattle for the commercial market,” said Mr Miller.

“They have demonstrated how top quality cattle can be produced on grass on a high lying hill farm presenting many challenges.”

But Mr Miller said Scotland was falling behind Ireland where EU money was being used to finance an ambitious data capture programme, including carcase information and eating quality, to help producers in their selection of breeding stock and also a performance testing programme to assess the commercial progeny of selected sires.

“We have quite a lot to learn from Ireland where they are proving smarter and are moving forward more quickly than we are in Scotland,” said Mr Millar. “Capturing all the relevant performance information on one central data base would give us an extremely powerful tool.”

The independent testing of commercial progeny would validate performance information and eliminate “rogue” data while individual feeding would enable feed conversion efficiency to be assessed.

Contrary to popular belief, research work in Ireland had indicated that bulls showing the highest liveweight gains were not necessarily the most efficient in converting feed into beef. Reducing feed costs –the benefit could be as much as 7kg per head per day – would be a major bonus for the industry.

There was also a need to identify the genetics of cattle producing a higher proportion of the best cuts in a carcase, rather than just huge rumps and mince, which could be worth as much as £200 in carcase value.

Research at the Roslin Institute had also indicated that the progeny of some sires had a higher resistance to TB than others, and the same might also apply to Johne’s diseases, which offered tremendous potential advantages to beef producers.