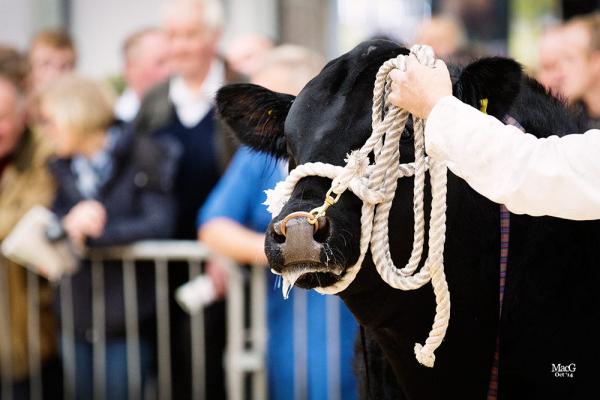 Aberdeen-Angus bulls have met a steady trade today in Stirling, but it was the pre-sale champion who took the headlines from the show and sale ring in the form of Tonley Pato N938 from father and son team of Neil and Mark Wattie, Tonley, Aberdeenshire. 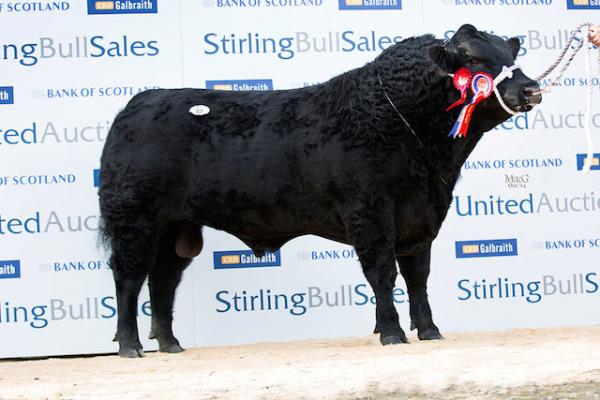 Born April 2013, Pato is by the Netherallan Peter Pershore E052 son Blelack Evor H929 and is out of the Hurdcott Elixier E215 daughter Tonley Princess K729. He’s been shown this summer taking the reserve male championship at Turriff Show and carries a milk figure of +17, a TSI of +44 and SRI of +51. Buyer at 12,000gns was Jan Boomars for his Vexour herd, Surrey.

It was a bit of a jump in price to what was then a steady run of bulls between the 6500gns and 4000gns mark. The first to go at the joint second highest price of 6500gns was the reserve senior champion, Water End Payton N108 from Victor and Paula Dobson, York. By the former herd sire Blelack Evergreat H003, he’s out of The Moss Mr Essen D413 daughter, Water End Prudence H069 and sold to C Gorn, Burray, Orkney.

The second at this figure was the intermediate and reserve overall champion, Idvies Johnston Eric N588 from Alistair and Graeme Fraser, Forfar. This is by senior herd sire and privately purchased Shadwell Black Broughton K485 and is out of Idvies Juana Erica K457, a Rawburn Rommel E423 daughter who is full sister to the 20,000gns Idvies Jarvis Eric J427, the February 2011 intermediate and overall champion. Buying this one was judge Ian Mathers, Kintore, Inverurie. 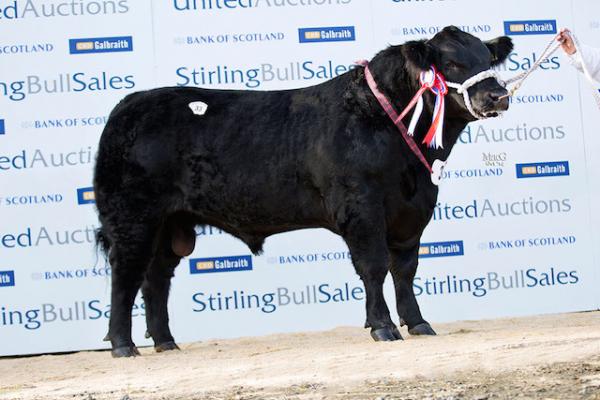 Then at 6200gns was the first prize JAC First Class N015 from A Cutherbertson and Son, Balfron, Glasgow. By HF El Tigre 28U, he’s out of the TLA Northern Samurai daughter Netherton Frances F398. This one has already been used on heifers in the herd and carries a SRI of +40. Buyers here were the Crofters Commission. 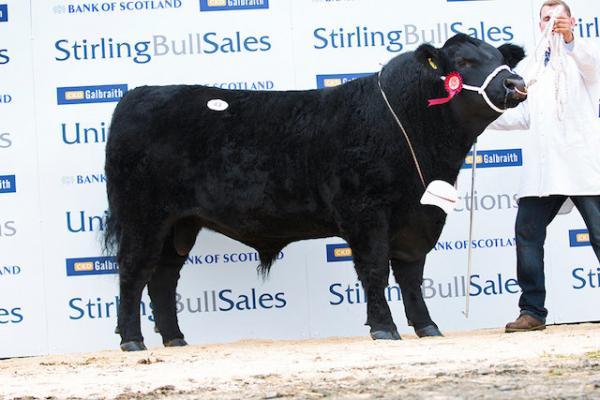 Then at 6000gns was he senior champion Logie Prize Bruce N328 from Messrs Bruce and Partners, Ellon, Aberdeenshire. By Glenbuchat Bruce K149, he’s out of the Logie Darius E382 daughter Logie Panache H701. Securing this one was James Hamilton, Carluke, Lanarkshire. 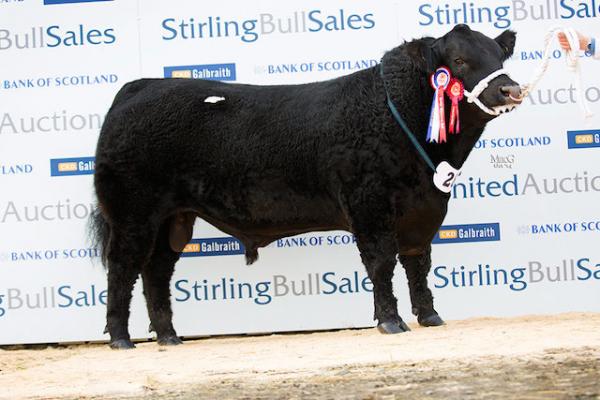 Two bulls then shared a price tag of 5800gns, the first of which was the second place and reserve junior champion Cairnton Blackcap N355 from Ken Howie, Banchory, Aberdeenshire. By Blelack Kanasta Lad G191, he’s out of the Oakchurch Dominator G035 daughter Blelack Blackcap K379, who was purchased at the Matrons Sale in October 2012 for 6000gns. He also carries a SRI of +50 and heads to N Rendall and Sons, Pappa Wastray, Orkney. 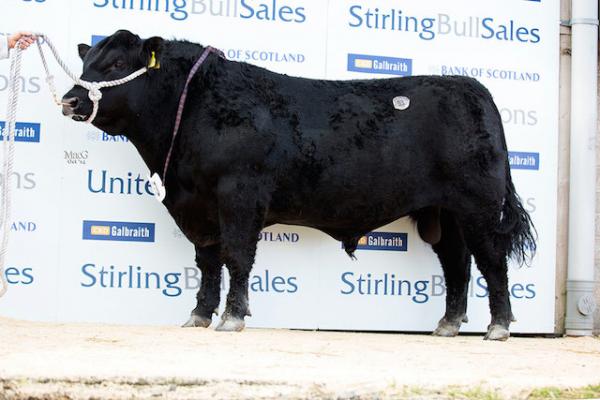 Next at that money was Ettrick Godolphin N126 from David Gray and family, Selkirk. By Rawburn Elmer J921, he’s out of the Ettrick Bellhaven F017 daughter Ettrick Gaenor H034. He carries a positive calving ease and a SRI of +42. Godolphin was knocked down to A M and C Ewen, Cornhill, Banff. 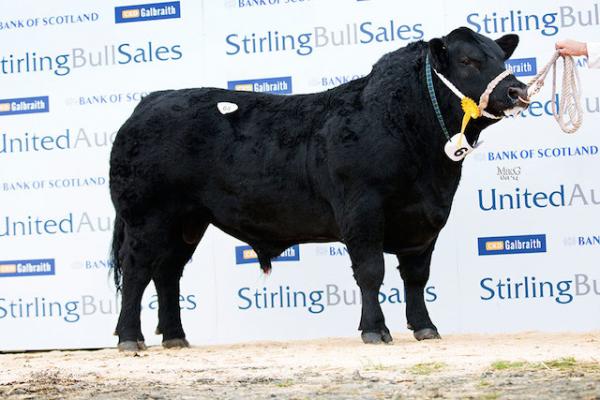 A further two bulls then sold at 5500gns, the first being Tree Bridge Presley N422 from Senior Vice President David Evans and his wife Penny. By Abberton Dazzle G160, Presley is out of the Skaill Delta B481 daughter Tree Bridge Polly Pride E101 and has been shown with success on the English summer circuit. He also carries a SRI of +50 and was knocked down to Terry Coghill, Orkney.

The second at this price had travelled over from Northern Ireland in the form of Lisburn, Co Antrim-based James Porter’s Old Glenort Victory N496. This Luddenmore Eclipse J067 son is out of The Moss Mr Eshton D409 daughter Old Glenort Victoria K746, a former Balmoral prize winner. Victory himself was reserve champion at Antrim Show this year and heads to High Milton Farms, Elrig, Newton Stewart. 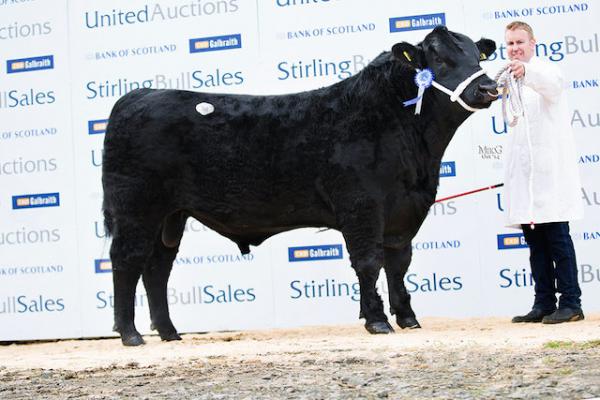