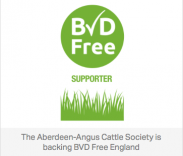 English cattle farmers have until the end of the year to benefit from free uploads of BVD test results to the BVDFree England database. The database provides recognition at a national level for all individual animals and herds testing negative for BVD, which can prove attractive for onward sales.

Bovine Viral Diarrhoea (BVD) is one of the biggest disease issues facing the UK cattle industry. BVD has been estimated to cost between £13 and £31 per cow, equating to around £39.1m across England.

BVDFree board chairman, Bill Mellor said “I and many others have seen both the damage BVD can do in a herd and the improvements, in terms of both calf health and fertility, you get when you eliminate the BVD virus. There are real economic benefits, in all systems when there are no cattle persistently infected with BVD. Joining BVDFree shows you want to be part of the drive for national elimination and are playing your part to deliver the next generation of cattle, free from the millstone of BVD. “I passionately believe all involved in the cattle industry need to work together to eradicate BVD and as a consequence improve the health and welfare of the national herd.”

BVDFree board member Roger Cunningham of the British Cattle Veterinary Association (BVCA) encourages both farmers and vets to back the scheme, “In setting up BVDFree we have taken the first step to national freedom. The sooner farmers join BVDFree and take the simple steps to tackle the disease, the sooner all will be free of the risk of a BVD breakdown, which can be catastrophic.”

Fellow board member Chris Dodds, of the Livestock Auctioneers Association, said: “Recent press articles have highlighted strong demand for BVD free cattle in Scotland and the North of England, with an emerging premium for such animals” adds

Over 100 organisations have now signed the statement of intent, backing the eradication of BVD from the national herd. For more information or to sign up, visit bvdfree.org.uk.