Stirling senior trade leading at 8500gns for the senior champion 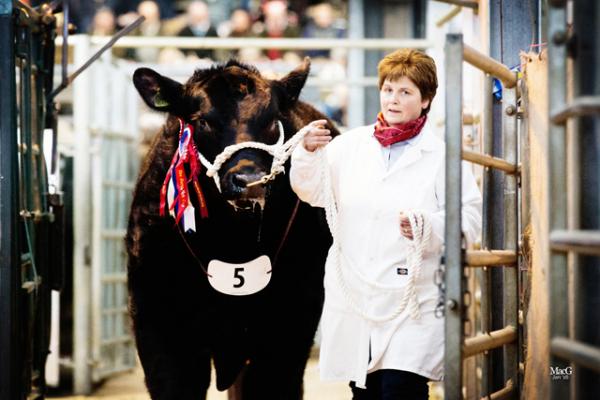 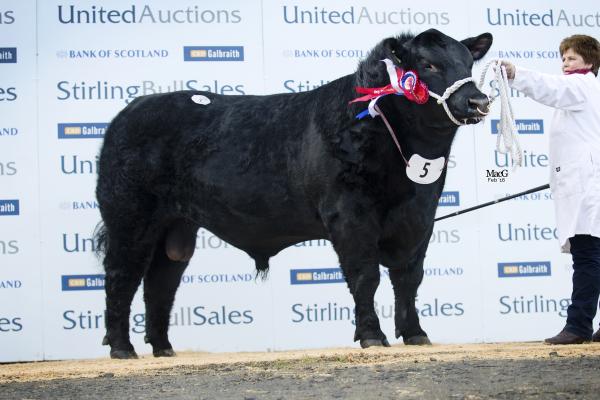 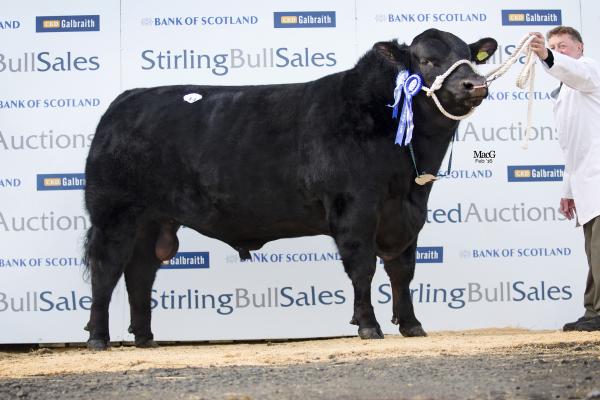 Then at 4800gns was Logie Laird P440 (lot 17) from Messrs Bruce and Partners. This Blelack Lord Hildalgo H972 son is out of a Skill Dot Com A304 daughter. and was knocked down to J and R Stanger, Sandwick, Orkney. Straight after selling for 5800gns was the first place Rulesmains Mr Ess P501 (lot 18) from Andrew Hodge. By Rawburn Black Hawk L261, he’s out of Weeton Miss Essence J146 and sold to D T and C Mycock, Duns, Berwickshire.

Then selling for 5000gns was Chapelton Duke P865 from the Biggar family. By Hurdcott Brandon L412, he’s out of a home bred Chapelton Watch Word G337 daughter and heads to Ardyne Organic Farms, Argyll. Next up selling for 4200gns was Netherton Black Wizard P810 (lot 21), an ET-bred Ardrossan Admiral A2 son out of a Netherton Big Edition H460 daughter. This one heads to Minehead, Somerset, with M R and S K Westcott. 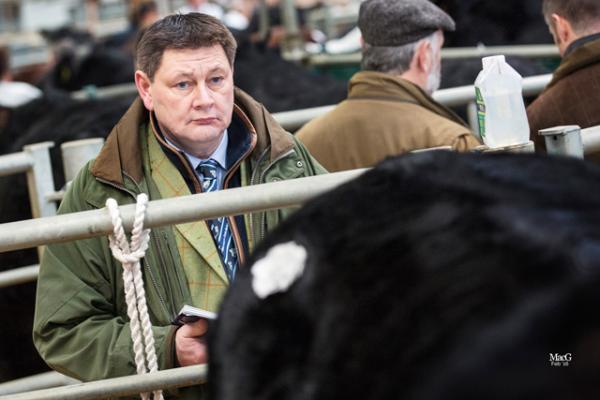 Then trading for 8000gns was the Henderson family with Culrain Ravello P565 (lot 35) selling to Messrs MacFarland. This Hallington Evolution K281 son is out of a home bred Culrain Patriarch E231 daughter. Buyer here was MacFarlene Farms, Duns, Berwickshire.

The first from the Lakewood Stud, Lakewood Matrix Professor P159 (lot 40) has gone at 5200gns. By Rawburn Elysium F547, he’s out of a home bred Elgar of the Moss daughter and sold to A Haggart, Crieff, Perthshire. Then at 4200gns was Oakchurch Dragon P175 (lot 41) from Jeremy and Ala Price. By Blelack Blacked L774, he’s out of a home bred Hoff Limited Edition daughter and sold to W Mitchell and Sons, Lanark. Just shy of that money at 4000gns was the first from Neil and Graeme Massie, Blelack Bennie P275 (lot 42). This one is by Blelack Equity J127 and is out of a Peter Pershore daughter and sold to W Bell, Morpeth, Northumberland. In a similar run of trade, Richard and Carol Rettie sold Glenbuchat Kenneth P449, a Lockerely Kobra H954 son, for 4200gns to E L Laing, Ardgay, Ross-shire.

Then at 5800gns was Balmachie Election P181 (lot 44) from Messrs John Lascelles. By Transformer, he’s out of a home bred Balmachie Kiwi Sam G034 daughter and found a new home with Huntlyhill Farms, Lanark. Then at 5500gns was Linton Gilbertines Elman P852 (lot 48) from John Elliot representing the trustees of the late Gordon Brooke. This third place bull is by Rawburn Black Hawk L261 and sold to H and K farms, Lockerbie, Dumfries. Next up at 5000gns was Tree Bridge Portree P481 from David and Penny Evans. This Abberton Dazzle son is out of a Chapleton Dark Mahmoud E826 daughter and sold to the Ferguson Bros, Linlithgow.

At 4000gns was Shawtonhill Nemo P459 (lot 50) from the Strachan family. This one is by Rawburn Elmer J921 and sold to Terry Coghill, Orkney. Then at 5000gns and selling to J S Fleming, Newton, Stewart, was Andrew Hodge’s Rulesmains Prince Paso P523, a Flooden Ross  M721 son.

Then at 6000gns was the first place Eastfield Evoque P638 (lot 56) from Ewan Brewis. By Halbeath Kansas L429, he’s out of a home bred Eastfield Black Bandit H876 daughter. Buyer here was H M Murray, Turriff, Aberdeenshire. Then at 6500gns was Nessrs Bruce and Partners selling Logie Equable P455 (lot 58). This Rawburn Enoch L309 son is out of a Logie Darius E382 daughter, which found a new home with J B Pater, Earlston, Berwickshire.