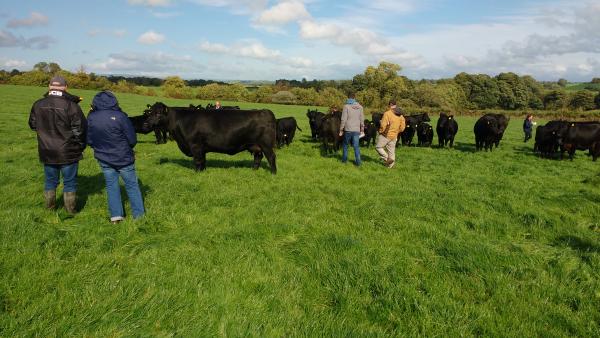 An open day at Windy Pike Farm, Gisburn, ahead of next Saturday 22nd September’s major sale at Skipton Auction Mart of the entire Ribble Aberdeen-Angus herd from Henry Rowntree, of Rowntree Farms, proved a resounding success.

Barrie Turner commented: “We were all treated to a gold mine of well-bred, high performing Aberdeen-Angus cattle at Ribble. I met customers looking to start new herds, along with those looking to expand. All demonstrated a great enthusiasm towards the breed, while admiring this award-winning herd.”

Mr Rowntree, who established the Ribble herd in 2002 and is now retiring, said: “The stock bulls were very popular, but perhaps most people were surprised how docile the cattle are and the consistent quality, with repeated comments of the impressive two-year-old heifers with some great calves at foot.”

The open day was staged following a good week for Ribble, which again won overall Champion Herd in the 2018 PENWAC herd competition prior to around 400 head going under the hammer at the sale.

Image below: Visitors inspecting the herd.