Next best in the female offering was the small dispersal of Robert Marshall’s Strath Urr herd and leading that at 8300gns was the 2015 Great Yorkshire Show champion, Belhaven Zephyr L370. Born May 2011, this one is a Muirhall Double Edition E018 daughter and is out of a Belhaven-bred Vermillion Dateline daughter. Buyer here was Ian Colville, Grove, Belfast.

Her twin heifer calves by Logie Limited Edition then sold for 3500gns to Andrew Ewing, Northern Ireland and for 3400gns to O F Bell, Roxburghshire.

Leading the shown females was the overall female champion, Border Lyne Gentle Julia R132 from Mr and Mrs Story. This December 2014-born Netherallan Peter Pershore E052 daughter is out of a home bred Kincardine Castle Etive Mhor H631 and sold to Stuart Thomson of the Coldoch herd, Stirling, for 7000gns. 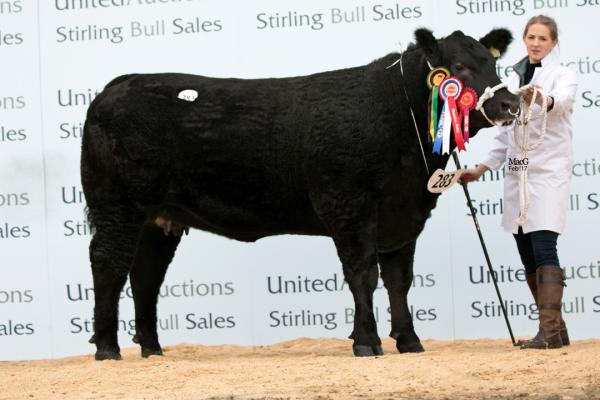 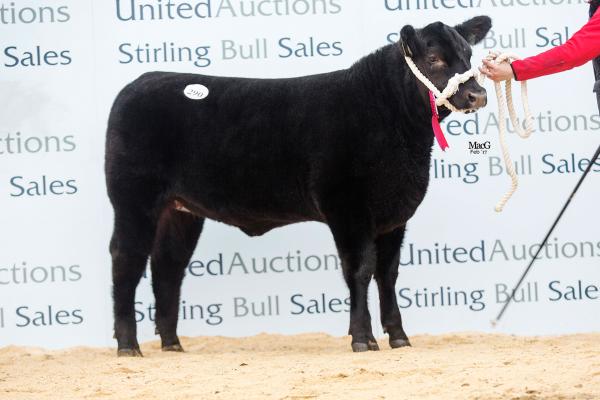 Meanwhile, heading across to Northern Ireland with Kevin McOscar was Linton Gilbertines Black Bird R928 from the Trustees of the late Gordon Brooke. This February 2015-born heifer is by Rawburn Black Hawk L261 and is out of a Hoff Head of the Class daughter going back to Coldstream lines.

The Idvies herd of Messrs Fraser had a top call of 2400gns on two occasions, the first of which was Idvies Elmoy P632, a daughter of the successful show bull Shadwell Black Broughton K485, which sold to B and J Mackay, Caithness, while the other was Idvies Poppy P658, by Morven Kyle L743, which was knocked down to the Ardoyne Organic Group, Argyll.

The best from the Belhaven draft of John Gilmour was a call of 2300gns for Belhaven Edith R114, a Retties JFK M195 daughter. This one sold to John Fleming, Newton Stweart.