Society President David Evans has landed in Mexico for the World Angus Secretariat meeting and has been sending back his thoughts on what he’s seeing on his travels…..

“We started our travels in Chihuahua, about a two hour flight north of Mexico city. At an altitude of 4500ft, it’s a very arid area, so straight away I’m interested to see the type of cattle and how they cope in the heat. We’re visiting a ranch today and then it’s off to the Chihuahua Cattle Man’s Association for a show and rodeo, as well as a dinner later tonight.

Lunch at a hacienda ‘San juanito’ was quite amazing. They are the largest apple producers in the world even the lane to the centre of this one property took 40 minutes. All the apples are picked by hand and at harvest they have 10,000 pickers paid cash daily. Prior to that we visited a feed/rearing lot that had 9000 head at any time. Some 90% move to Texas 3.5 to finishing feed lots. They have also just set up an embryo and AI centre that is part funded by the Chihuahua University as a teaching establishment, where local members of the cattle association are putting their best cows for flushing and bulls for AI, but are also brining in other genetics from the States.”

The Cattleman’s Association facility was impressive and included a purpose built show and sale facility, as well as the rodeo arena which is one of the largest in Mexico. It was obvious from the dinner last night just how important agricultural is to both local and regional government. The Mexican agriculture minister was extremely enthusiastic about the tour and was delighted that there were delegates from 19 counties visiting the country. The Mexican government sees funding of agricultural research and development of great importance to the economy going forward. The show of cattle was put on Angus breeders from the Chihuahua area. Both red and black Angus were well represented with about 120 cattle on show in total. They are somewhat smaller than our cattle in the UK, mainly to suit the environment, with mature cow weight ranging from 550 – 600kg. The stocking rate varies, but typically the range varied from 4-26 acres/cow.

A visit yesterday to the San Juanito ranch to the north of Chihuahua proved to be just what I imagined a high ground ranch to be. This was a family run ranch rising to 7500 feet running 750 cows at 1 cow to 26 acres. Angus cows were introduced in 2007 and now number 250. These cope with the higher ground on the ranch better than the cross cows and the pure Charolais. They make extensive use of AI, with 70% of the cows holding to AI. Heifers are calved at two and even though the area is suffering from drought the cattle were well fleshed and calves were doing well.

Saturday morning saw us visit the San Luis ranch, about 1.5 hrs North of Chihuahua. This 7000ha ranch, split into 200ha paddocks, is home to a red Angus herd that was started just a few years ago with the foundation stock being 200 yearling heifers imported from North Dakota and Nebraska. Currently 400 cows are registered, with the aim to increase cow numbers to 800. All cows are AI’d with 70% holding to AI. AI is preferred as they then know the breeding of each calf, but they are still DNA tested to verify the sire and help maintain the integrity of the herd book. Even though the scale is larger than we have in the UK, the attention to detail regards recording birth and weaning weights was impressive.

A visit to the El Palomino ranch saw black Angus that were similar to those we are used to at home. This 4000ha ranch was one of a number owned by the same family. Some 200 pure cows are run here along with a similar number of Herefords and again, a significant use of AI is made. The rainfall in this area is usually 14 inches a year, however with the current drought the rainfall over the last two years has been less than six inches. While we were there, black clouds were building to the west and it transpired that after our visit they had 15mm of rain overnight. After a closing dinner in Chihuahua we have now moved onto Durango for the second part of the tour.
Today we are at the Durango Showground for the Beef Expo event which incorporates a show of Angus cattle, the blacks today and reds tomorrow. Approximately 230 cattle to judge today with each class having only cattle born in the same month in each class. A team of three judges are placing the cattle, an American, Argentinian and a South African. It will be interesting to see if they agree throughout the show. 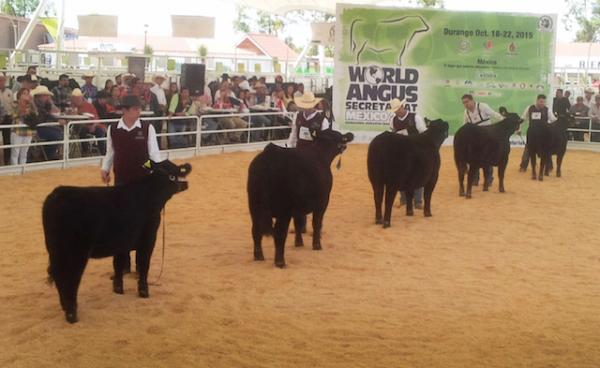 After three days in Durango at the Beef Expo and Show we are now on the move to Mazatlan for the Secretariat meetings. However, on the way we had brunch at Tres Marias ranch which is owned by the Estrada family. Billy has been the driving force behind the tour. The ranch is at 7500ft and runs at a stocking rate of 30 acres to the cow. They are currently recieving adequate rainfall. Three years ago the drought was so severe they had to bring in water and feed for the cows. They were close to giving up, but perceviered and over the two days at the show they had success with both red and black Angus. The previous week before, at the National Brings Show, they took the gran championship.
« Go back
This website uses cookies to ensure that we give you the best experience on our website.Accept Read More Reject
Review cookie consent