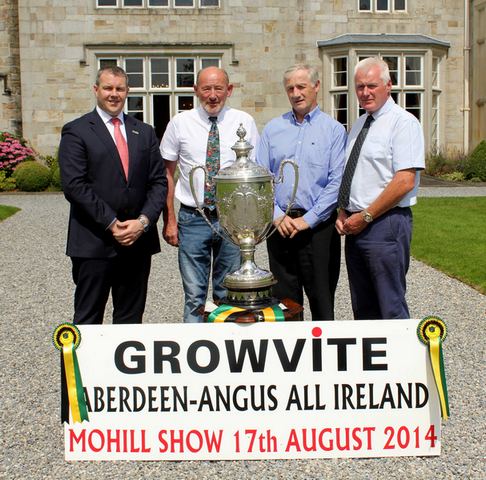 The Irish Aberdeen Angus Association is all set for the 87th annual Mohill Show will this year will host the 2014 Growvite All-Ireland Championship on Sunday 17th August.

Irish Aberdeen Angus Cattle Society president John Tait said: ”The All-Ireland final is celebrating its 27th Anniversary, and I would like to take this opportunity to thank Tulivin Laboratories/Univet Ireland Ltd for its continued sponsorship of the competition.”

Judge for this year’s show is Aberdeen Angus Cattle Society president Victor Wallace, who runs the noted Baronagh herd based at Garvagh in County Londonderry.

The schedule for the County Leitrim-based show features 11 classes for bulls, cows, heifers and calves. The four highest placed entries in each class will receive cash awards ranging from €100 for first prize, down to €20 for fourth prize, as well as Tulivin/Univet products. There are also two classes for young handlers, junior (under 17) and senior (17 to 25). Prizes in this section include €75 for first, down to €30 for fourth.

Sponsor Brendan Crowe of Tulivin/Univet said: “We are proud to be associated with the Irish Aberdeen-Angus Association. We have been sponsoring the All-Ireland finals for 27 years and we share a stand with the Irish Aberdeen-Angus Association at the National Ploughing Championships on an annual basis. Based in County Cavan the company manufactures a range of products for cattle, sheep and pigs, all of which are readily available from animal health outlets in the north and south of Ireland. To find out more about the wide range of products available from Tulivin/Univet  contact its Northern Ireland area manager John Gribbin on 07966 246777.