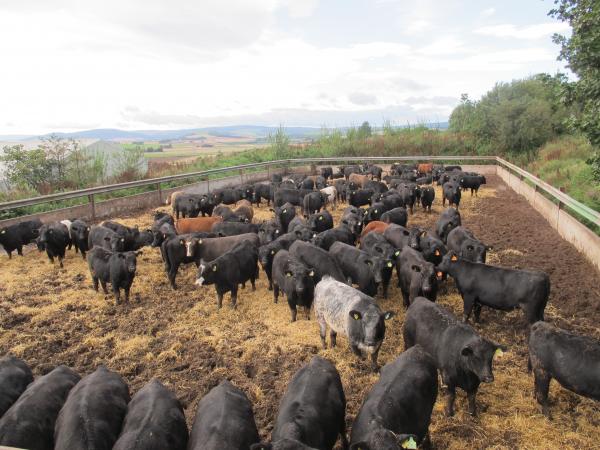 The modern Aberdeen-Angus can compete on performance with any of the Continental breeds, and the premium for finished cattle makes them more profitable, according to leading finisher, Ian Emslie, Little Barras, Laurencekirk. Pictured above: The team at Little Barras – Ian and Margaret Emslie with son, John

Mr Emslie has stuck by the Aberdeen-Angus through good times and bad for 50 years and now with his wife, Margaret, and son, John, finishes 2350 head a year – mostly heifers – to Scotbeef, Bridge of Allan for Marks and Spencer. The cattle earn a premium of 30-35p/kg deadweight but this can sometimes be as high as 40p.

He will be in his usual place at the ringside at Thainstone Centre when Aberdeen and Northern Marts hope to have 600-700 Aberdeen-Angus on offer at their annual autumn show and sale of native breeds store cattle.

“We finish mostly heifers and the Aberdeen-Angus heifer of today is a different proposition to the Aberdeen-Angus of 50 years ago,” he says. “The breed has changed completely. Heifers no longer become overfat before reaching an economic slaughter weight as they used to. We are finishing heifers today at around 600kg liveweight compared with 450kg at the same age in the old days.”

The Emslies scour the whole of Scotland for Aberdeen-Angus heifers, buying stores from marts up and down the country and direct by private treaty from regular suppliers. Many come from Orkney and Mr Emslie can be found at the ringside at Kirkwall Mart most Mondays at this time of year, as well as Thainstone on a Friday.

Cattle are batched on arrival on the farm and maintained in the same batch on an “all in, all out” system. An average of 40 cattle a week are sent to Scotbeef throughout the year but over the next two weeks 80 cattle a week will go with a large batch due to finish.

“We market the whole batch at the same time as there is no point holding on to any cattle which are not performing as they won’t improve with age,” says Ian.

Heifers are fast finished over 70 to 100 days, although smaller cattle going to grass may be on the farm for up to 200 days. Average deadweight is 320kg and most grade R for conformation although more are achieving U grade these days.

“Weights tend to be variable but the abattoir is prepared to accept this as we aim to market the cattle at the right degree of finish,” says Mr Emslie. “Scotbeef like cattle with more finish and this makes for better eating quality which is what M&S are looking for.”

Other abattoirs are encouraging farmers to reduce the maximum weight of finished cattle by penalising carcases over 400kg. This doesn’t affect the Emslies with their Aberdeen-Angus but they also finish another 1700 Continental cross cattle which Ian reckons are failing to reach the right grade for conformation because of the weight restriction.

“It’s all wrong because it means the eating quality of the beef is less than optimum,” Ian argues.

A feature of the beef operation at Barras is the low cost finishing system which is based on grass during the summer and a winter diet of home-grown barley and wheat and bought-in by-products such as brock potatoes, turnips, carrots and parsnips which are crushed and mixed with draff. No silage is made on the 150 acres of grass, although is sometimes bought if the price is right, and neither minerals nor concentrates are fed.

Waste vegetables are bought from regular suppliers and during the winter 200 tonnes of potatoes and 100 tonnes of carrots are required each week.

“The cattle generally have the frames on them when we buy them as stores and don’t need a high-protein diet to finish,” John explains. “They get all the trace elements they need from the soil on the vegetables.”

Arable cropping comprises 300 acres of barley and wheat, all of which is fed on the farm. The cattle provide an abundance of muck for the arable cropping and minimises the need for artificial fertiliser. One 150 acre field has been in continuous wheat for 17 years and has received no compound fertiliser, only farmyard manure. Surplus FYM is traded for straw with neighbours.

“Everything we sell off the farm goes on four legs,” Margaret points out.

The whole operation is run by Ian who looks after the buying, spending much of his week at marts, and John, who runs the farm and is responsible for the marketing of the stock but also helps with the buying, particularly at Thainstone, along with one other employee, with Margaret undertaking the vital job of ensuring passports are in place and John’s wife, Janice, doing all the computer work on a part-time basis, including inputting all buying and selling prices to keep a close watch on margins,

In addition to Scotbeef, the Emslies have a market for two Aberdeen-Angus cattle a week to a local butcher, Bannermans of Inverbervie, which is proving a great success.

“Bannermans like Aberdeen-Angus heifers because it is the best beef in the world for eating quality,” Ian contends. “It is worth the journey to Inverbervie to try it!”

He would like to see the present system of grading carcases in the UK, which is based on the EUROP grid as a measure of conformation and fatness, changed to the American system which measures the size of rib eye and marbling which, Mr Emslie found on a study tour to the USA last year, is a far better measure of eating quality.

He would also like to see more suckler herds using Aberdeen-Angus sires to meet the demand for Aberdeen-Angus cross cattle but suggests pedigree breeders need to put more emphasis on further improving conformation rather than concentrating on size.

“The ability of the breed to thrive and grow on a low-cost feeding regime and command an attractive premium, makes the Aberdeen-Angus the ideal commercial beef animal,” says Mr Emslie.