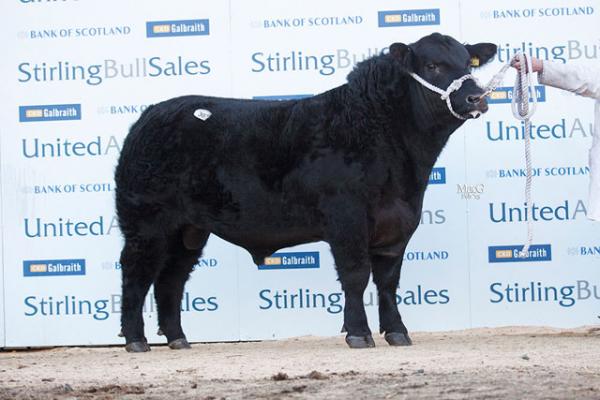 Trade for the stronger of the junior bulls is keeping firm this afternoon as we near the end of the catalogue and selling for 8000gns was the second placed Eastfield Juggernaut N559 (lot 302) from Ewan Brewis. By Halbeath Kansas L429, he’s out of a Rawburn Rochester daughter. This one heads to BQ Farms.

Then another from Tom Arnott and family, Haymount Geigesso N411 (lot 303) has gone at 10,000gns to Angela MacGregor of the Newcairnie herd. By Skaill Darkness L460, he’s out of a Bardrain Eiger G284 daughter and carries a strong set of figures throughout including a SRI of +76 and TSI of +56.

Then the next to come from the Massie family was Blelack Prince Crane N234 (lot 313) which was knocked down at 4000gns. Again by Egotist, he’s out of a Peter Pershore daughter.

Now wrapping up proceedings was the Clark family with Duncanziemere Jigsaw N087 (lot 324) has gone at 7000gns. This Karlos son is out of a Pastor daughter and carries a SRI of +55.

Then the last bull in the ring for the Angus today had made the journey over from across the water in Northern Ireland and sold for 4000gns for Samantha Allen, By Netherton Mr Brazilian E377, this one is out of a Netherton Eastern Cruz daughter and heads to the west country with Colin Hutchings where he will likely make an apperance on the show circuit.