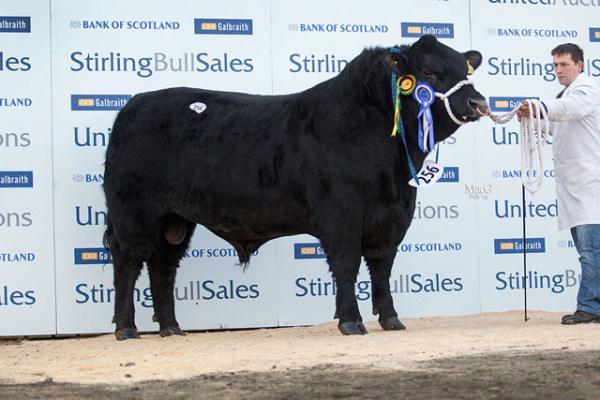 Neil and Graeme Massie’s intermediate and overall champion has just sold at 7000gns to Terry Coghill. Blelack Evangelist N174 (lot 254) is by Mac Elvis K085 and is out of the Peter Pershore daughter Blalck Evora K583. He has a milk figure of +17, as well as a SRI of +49.

Straight after came the sale leader so far for the day, the reserve intermediate champion Duncanziemre Jake N070 (lot 256) from the Clark family. By Nightingale Proud Jake G405, he’s out of a Young Dale Touch Down 36M daughter from the successful Jody line. He heads to Ballindalloch Farms at 9000gns.

Back in the run of intermediate bulls in catalogue order was Alasdair Houston selling Gretnahouse Kool Lad N611 (lot 200) for 4200gns. By Ardrossan Admiral A2, he’s out of a Prince Consort daughter, Blelack Karama Lady H908 who is full sister to the 15,000gns Blelack Krackerjack Lad and half sister to Kanasta Lad. He also has a SRI of +68.

Then came the first placed Tonley Edwin N939 (lot 203) from the Wattie family. Again by Evor, he’s out of a Tonley Esquire daughter. He sold for 6800gns.

Then at 8000gns was the second placed Eastfield Peski N515 from Messrs Brewis (lot 211). By Rawburn Edge J983, he’s out of a Rochester daughter and carries a milk figure of +15 and a SRI of +55. He heads to Daylesford Organics. 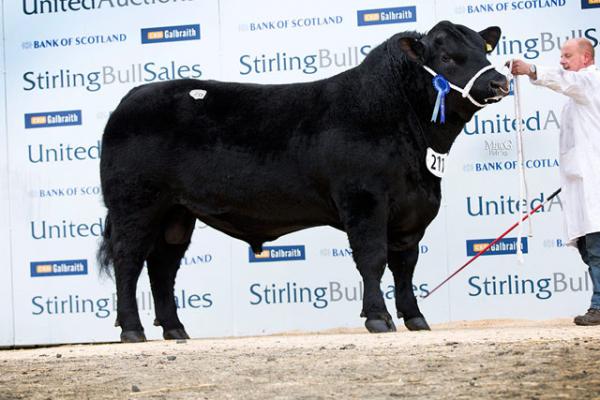 Not long after was Alasdair Houston selling the first from the class nine run of bulls, Gretnahouse Elijah N617 (lot 213). Another son of Ardrossan Admiral A2, he’s out of a Peter Pershore Blelakc-bred daughter and sold on the telephone for 5200gns.