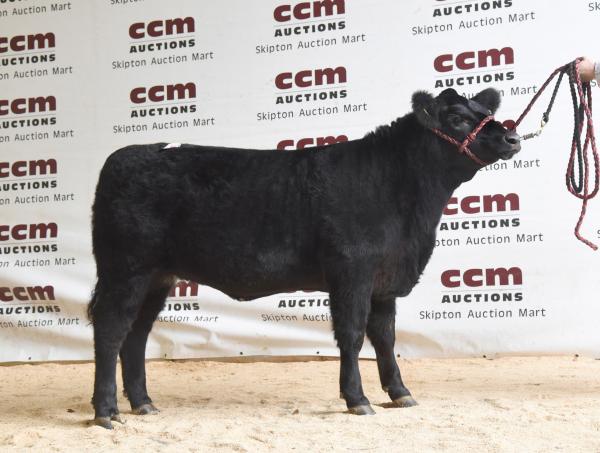 A top call of 3,400gns and a clearance rate of 95% produced the headlines at The Aberdeen-Angus Cattle Society’s inaugural autumn show and sale of pedigree females at Skipton Auction Mart on Wednesday the 7th of November. The much-anticipated sale of 55 head comprised a collective portion, followed by a draft of matron cows from the local Airedale pedigree herd of South Craven father and son farmers and butchers, David and Joshua Isherwood.

It was one of their matron cows, Rawburn Kinannie M580, bred by John Elliott at Roxburgh Mains, near Kelso in the Scottish Borders, which topped the day’s proceedings at 3,400gns. She is a 2012-born daughter of Lockerley Legolas G850 and was sold with her Weeton Ephos R472-sired August-born heifer calf, Airedale Kinnanie U593, at foot.

The productive mother of five calves to date herself joined the well-known Weeton pedigree herd, run by John and Doreen Lofus at Preese Hall, between Blackpool and Preston.

Next best of the strong Isherwood consignment at 3,200gns was a product of Loftus family breeding, Weeton Rosebud N379, a 2013-born Rawburn Elysium F547 daughter, out of Elliot Rosebud H847. Having previously produced three calves and flushed in July giving 11 embryos, she found a new home in Wales with GV Jones, of Pwllheli.

All were among their consignment of 23 cows, five with calves at foot and all sold ready for service. It represented the largest ever dispersal since the herd was first established at Lane Bridge Farm, Kildwick, in 2013 to add prestige to the combined farming and butchery operation.

The Airedale herd stood at 162 head prior to the sale and Mr Isherwood said 22 heifers still at home had since been put to the bull to replace those sold at Skipton, many of which were among the foundation herd.

The family-run Isherwoods Butchers in Kirkgate, Silsden, was established in 1987 by Mr Isherwood, who several years ago handed over the reins of the shop to his son Joshua so he could concentrate on the farming side of the business, though he remains a familiar face in the shop, where prime quality meat from the Airedale herd continues to prove highly popular.

Back at the sale, other leading prices came from the Yearsley herd of husband and wife, Adrian and Penny Johnson, based at the village of the same name near Brandsby in Hambleton.

Their leading price of 3,000gns fell to a first-rate cow with bull calf outfit. The cow was The Moss Fine Art K029, a 2010-born daughter of The Moss Black Lord, sold with her Spring-born Haymount Williger K992-sired bull, Yearsley Fully Active U326 calf, and bought by livestock agent Andrew Ewing for a regular client.

The Johnsons also had a run of six eye-catching January, 2018-born heifer calves, three of which made a clean sweep of the prizes in the single show class for haltered heifers. It was the second prize winner Yearsley Minerva Belle U311, by the AI sire, Rawburn Makka Pakka R076, out of Yearsley Minerva Belle M142, that became the top price calf when claimed for 2,200gns by the Elliotts at Roxburgh Mains.

The dam, herself a prolific breeder, was also offered for sale and made 1,800gns when knocked down to Paul Fletcher, of Heywood, near Rochdale in Greater Manchester.

The Elliotts also went to 2,000gns to claim the show champion, Yearsley Prunella U303, by Rawburn Boss Hogg and from an excellent line developed by the Johnsons, who established their Yearsley herd three decades ago. The third prize winner, Yearsley Felicia U314, a Haymount Earth Smith daughter, sold at 2,100gns to LS Whittaker, a buyer from Cheshire.

Show judge was Henry Rowntree, of Rowntree Farms, in Gisburn, who in September conducted a dispersal sale at Skipton of his entire Ribble pedigree herd, one of the biggest dispersals of Aberdeen-Angus cattle ever staged in the UK, with almost 400 head going under the hammer.

The Aberdeen-Angus Cattle Society had long recognised there was a need for an official breed sale in the area and the inaugural fixture for females had been in the planning for some considerable time, sitting nicely on the back of the Ribble dispersal.

“Having spoken afterwards with both buyers and vendors everyone was happy with the outcome of this first female sale and it has cemented its place in the Aberdeen-Angus calendar going forward.

“The stock forward this year were of excellent breeding, in good condition and also very well turned out for the sale, all these things contributing to the success of the event. CCM auctions are also very well placed in “livestock country,” with excellent facilities for preparing the stock and a great team behind the scenes ensuring the smooth running of the show and sale.

“We hope as a society to move forward next year with confidence and attract more breeders to enter top quality females to the sale and make it an attraction that must not be missed by Aberdeen Angus breeders from around the country.”

Shown below is image of Adrian and Penny Johnson’s champion calf at the inaugural fixture for Aberdeen-Angus females at Skipton: