Continuing a good day’s trade for the recently appointed president Tom Arnott was Haymount Geresso P489 (lot 115) selling for 10,000gns. This third placed bull is by Skill Darkness L460 and is out of a Lobar Backstair G290 daughter. Buyer here was Hugh Hodge, Stanley, Perth, for the Wyddial herd.

Next up at 5800gns and selling to Andrew Hodge’s Rulesmains herd was Blelack Einstein P393 (lot 116) from the Massie family. By Blelack Duke J262, this one is out of a Blelack Black Gold C717 daughter. Meanwhile, his herd mate, the Peter Pershore son Blelack Explosive P399 (lot 118) followed suit at 7500gns to Daniel Whiteford and Co, for the Borewell herd, Berwick on Tweed. 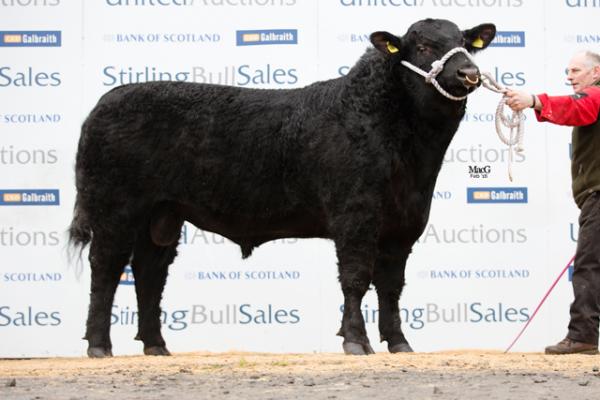 At 5000gns was Rawburn Even Steven P002 (lot 119) from John Elliot. By Rawburn Dublin K218, he’s out of a Lord Ross daughter and sold o LL Macvier and Co, Duns, Berwickshire, while for the same money was another from Alasdair Houston, Gretnahouse Sambo P712 (lot 120), again by Blacksmith and this time out of Wall Samantha F495. This one went to D C Moss and Son, Gotham, Notts.

Next up and trading at 6000gns was Duncanziemere Judge P111 (lot 121) from the Clark family. Again by Jester Eric, this one is out of a Moss Mr Eshton D409 daughter and heads to A J Millar and Sons, Monkie, Angus.

The next bull to carry a 10,000gns price tag today is Linton Gilbertines Black Prince P865 (lot 123) for John Elliot. This is a Linton Gilbertines Rowan K414 son out of a Rawburn Ravavo F517 daughter and stood second in his class. Buyer here was Messrs Johnston.

Then selling to David Walker for his Galcantray herd was Rawburn Destroyer P004 (lot 124), a Lord Ross son out of a Transformer daughter. And following straight after were Messrs Gilmour selling Belhaven Eisenhower P101 (lot 125) for 7500gns. This is a Billinge Magic Jack Eric M176 son and sold to R and E Vance, Whithorn, Newton Stewart.

Just shy of that at 7000gns was Logan Bar Davieboy P927 (lot 126) from Murray Lyle. By Logan Bar Dropgoal J653, he’s out of a home bred Ballathie Malibu E546 daughter. This one sold in a two-way partnership to Gordon Gray and Caroline Orr.

Next in from the Arnott family was Haymount Watchword P500 (lot 127), a Ballathie Quaker L598 son, which sold to Mountquharie Farms, Cupar, Fife, for 5200gns, while at 4800gns was Fell Lane Mr Bee P282 (lot 136) from Michael Lishman. This Peter Pershore son is out of an Auldhouseburn Karlos daughter and found a new home with R Orr, Bucklyvie, Stirlingshire. 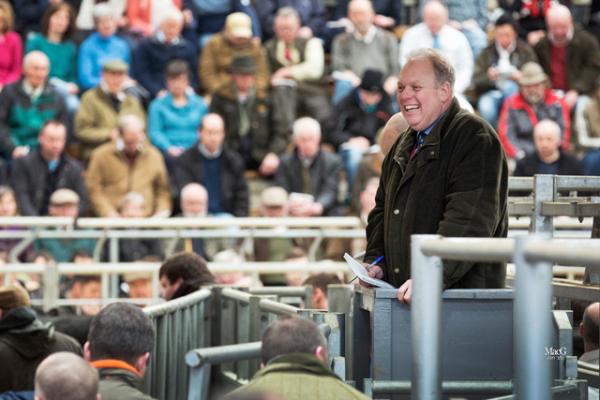 The second place Roscoe Earth Tremor P296 (lot 141) from Ross Farms has gone to Orkney with Terry Coghill at 5500gns. This one is a Blelack Earthquake K384 son and is out of the Wall Emperor Y222 daughter Wall Equidora E399.

At 6000gns was Logie Duke P499 (lot 149) from the Bruce family. By Rawburn Enoch L309, he’s out of a Peter Pershore daughter and exchanged hands selling to F T Walton, Morpeth, Northumberland.

As we’re nearing the end of trade for bulls today Wanda Hobbs has sold Ellin Evoque P080 (lot 154) for 6000gns to D G Mackey, Lisburn, Co Antrim. By Wedderlie Tarquin L383 and is out of a Wedderlie Nereside H581 daughter.

Ending on a high for the baby bulls in the catalogue, the Clark family have just sold Duncanziemere Jetset P124 (lot 159), another son of the successful show bull Jester Eric, for 9000gns. This one is out of a The Moss Mr Eshton D409 daughter and sold to the Eastern Greys herd, Malmesbury, Wiltshire.

And wrapping up proceedings for today was Tom Arnott selling Haymount Earth Smith R550 (lot 160), another by Blacksmith and this time out of a Haymount Wavacca E511. He traded at 4500gns to Adrian Johnson.