Carrying on a “steady in places” run of intermediate bulls here in Stirling, Alasdair Houston has sold Gretnahouse Blackpot P685 (lot 78) for 10,000gns. This one is a son of Gretnahouse Blacksmith L500 and is out of a Blelack Blackgem G721 daughter, Blelack Blackbird J204 and sold to John and Teena Gilmour for their Belhaven herd, East Lothian.

From the same home came Gretnahouse Elvis P686 (lot 80). Again by Blacksmith, he’s out of a Blelack Kanasta Lad daughter and sold for 6000gns to H T Pottinger, Thurso, Caithness.

Then back in the action was the Wattie family selling Tonley Edgar P068 (lot 83), a Blelack Prince Consort A286 son out of a Karlos daughter, selling for 6200gns to Angela McGregor, Whiterashes, Aberdeenshire.

John Lascelles was back in the action selling a pair of bulls, the first being Balmachie Boss P187 (lot 90), a Rawburn Black Hawk L261 son out of a Keystone daughter, selling for 5200gns to Scrainwood Estate, Alnwick, Northumberland. The next, Balmachie Future P188 (lot 91), followed straight after selling for 6600gns to Hogg and Partners, Earlston, Lauder.

Then the best so far from a big strong of bulls from Tom Arnott was the second place Haymount Eversmith P474 (lot 94). By Blacksmith, this one is out of a Windchill Equinox Y039 daughter and sold to Alex Sanger, Rosemount Farms, Montrose, Angus.

Next in for the Massie family was Blelack Lord Herod P366 (lot 96), a third place Blelack Equity L127 son, selling for 5000gns to D Strachan and Sons, Strathaven, Lanarkshire.

For the same money, Alan Lawson sold Hallington Prince Charming P455 (lot 97). This one is a Hallington Edition M362 son out of a Nightingale Defiance daughter and was knocked down to Liam Muir, Orkney. 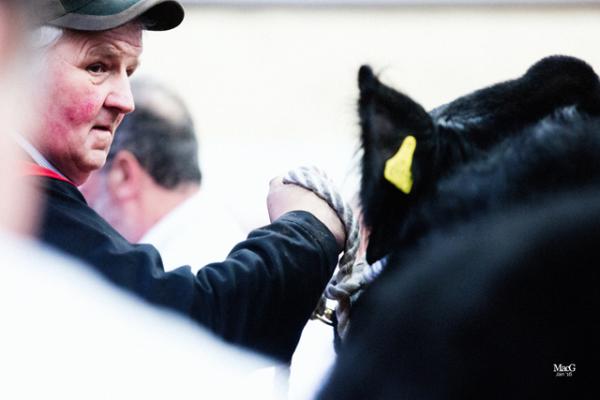 The next in from Andrew Hodge was Rulesmains Mr Izz P580 (lot 101) selling for 5800gns. This Peter Pershore son is out of a home bred HF Tigre 5T daughter and sold to Calfargie Estates, Balbeggie, Perth.

David Lucas has sold Cheeklaw Jackson Eric P499 (lot 111) for 5800gns. This one is by Cardona Proud Punch L752 and is out of a Tweedside Jewgal Eric Z083 daughter. Taking this one home was W Hamilton and Son, Gordon, Berwickshire.

At 6200gns was Messrs Strachan selling Glenbuchat Enforcer P488 (lot 113), a Wedderlie Oscoss H589 son out of a Lockerley Kobra H954 daughter.   This one heads to Duns, Berwickshire, with L L Macvie and Co.